Apple rejects app for tracking U.S. drone strikes — Drone+, which tracks media reports of casualties and maps locations of drone strikes, was rejected by the App Store for "objectionable" content. This is a very American attitude, objecting to the discussion of terrible behavior while letting the behavior go unchallenged.

A Statuette of Your Fetus — Expectant mothers can now order a custom three-dimensional model of their unborn child. ZOMG, that is bizarre. ETA: Technology Review has apparently taken this story down. See the screenshot of their headline here, to prove it was really there.

Bill Nye: creationism is bad for children — Bad Astronomer on Bill Nye's recent comments on the profoundly self-evident social and cultural destructiveness of Creationism. Oddly, I'm pretty sure the vast majority of evolution deniers would also identify as patriots, or "Real Americans", despite their savage efforts to destroy our educational and intellectual infrastructure.

Abortion: The Republicans and Personhood, Mitt Romney and Me — An anguished conservative at Feminist Mormon Housewives actually thinks through the real meaning of the Right's simplistic moralism. I wish more conservatives would think about the terrible consequences of so many of their beliefs.

Why We Have Sexual Harassment Laws — Ta-Nehisi Coates on Democrats behaving badly. Notably badly. (I don't link to nearly so many of these stories about Dems as I do about GOoPers for the simple reason that the Democrats have not founded their political fortunes on a knowingly hypocritical mantle of moral rectitude. But this one is egregious.)

Fraud — Wow. This is good. There are two explanations for Barack Obama winning the Presidency in 2008, for instance. One explanation is that a majority of Americans thought he was a good candidate and saw something in him that led them to vote for him. But that explanation requires you to understand that some people like him and value his values and some people don't, and (broadly speaking) you're in one group or the other (n.b. you may also accept there are thousands or millions of groups, loosely or closely aligned with one of the binary options). The other explanation is that there are shenanigans at work, that millions of votes were the product of fraud and/or that millions of voters were deceived; this explanation, you know, is curiously comforting even if it seems it shouldn't be, because while it postulates wide-reaching evil, it also means you're right, and your values could only be thwarted through deception and treachery. (Snurched from Steve Buchheit.)

What to Make of Mitt Romney's Birther Joke? — I suspect many Republicans who continue to subscribe to the birther lunacy do so because it bothers liberals and because it's an act of symbolic defiance of a president they dislike. The problem with birtherism, however, is that the underlying assumptions driving it have always been broader than the president. Birtherism is more than just a conspiracy theory about the president's birth. Its underlying principle is a rejection of American racial pluralism. The refusal to believe—in the face of all evidence to the contrary—that Obama is an American reads to many as saying black people don't really count as American unless they talk like Herman Cain or Allen West. (Snurched from Slacktivist Fred Clark.)

The Obnoxious Foreign Policy Ideas in Romney’s Convention Speech — Conservative commentator Daniel Larison on everyone's favorite GOP presidential candidate and his elastic relationship with the truth. (Or principles. Or, well, really, anything at all.) 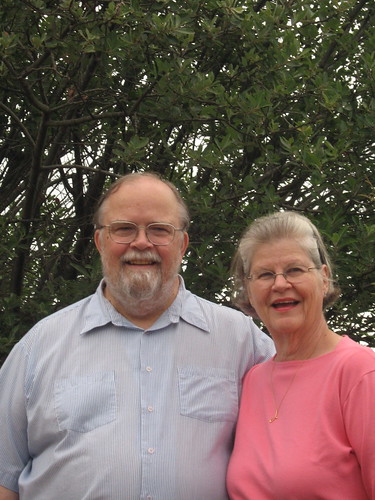 One of the lessor things I struggle with in this cancer journey of mine is how the people around me, those who love me most, have a need for assurance from me. Contact with me. To see me. To touch me.

This makes it difficult sometimes for me to engage in self-care. As relentlessly social and extroverted as I am, even I need to retreat sometimes. That might be into myself, or with a trusted friend or intimate, but it also means away from everyone else.

I suppose in the end, the cancer owns us all. I get to be the one who has to find and strike a balance every day underneath the iron weight of its oppression.

Yesterday was my only light day here at Chicon 7. I have seven programming items between today and Sunday, every meal booked with someone, a number of non-mealtime meetings, and the Hugo reception and ceremonies to attend. So naturally the day was packed.

I spent much of my day loitering in the lobby of the convention hotel. There's a point where you can see and be seen by everyone moving between the convention space, the dining/bar space and the East Tower rooms. It's a good time to catch people.

and , who accidentally matched

Had a business lunch with of the small press Paper Golem. Sally McLennan sat in as well. Then Elizabeth Stephan and I hung a while, before cruising the dealers' room.

The day wound up with a social dinner with , Mrs. , Dr. Marc Okrand (inventor of the Klingon language), and Sally McLennan. We at a place called q.

I have two words for you: Bacon sausage.

Yes, as in sausage made from bacon.

I mean, there was other stuff, like some truly world class pork ribs, some darned good brisket, and chocolate mousse on a pretzel crust with salted caramel. And some godawful food pickles. And cornbread. And hush puppies. And chips. But bacon sausage.

By the time we got back to the Hyatt, I was pretty burned out, so I skipped the partying and retired. Hoping I'll hold up better these next few nights, as today and the days to come are much more scheduled than yesterday was.