Reality vs. Screen Illusion — That emotionally tinged version of reality is what moviemakers need to bring to life if they want to create convincing illusions. The same general principle applies to painting. Often it's necessary to go beyond optical or photographic realism in order to achieve psychological realism. It's the difference between mere accuracy and true believability. Think about how this applies to writing fiction.

Three Questions with George Whitesides — The Harvard chemist talks about the problem of solving problems.

A Superstar Televangelist in Pakistan Divides, Then Repents — Note the deliberate distortions of truth, abusive manipulations, and serial lying. No different from American religious broadcasters. Speaking as an atheist, I far prefer my ethical framework to the alleged moral compass granted by this kind of faith.

The man with his name — Roger Ebert on Clint Eastwood's bizarre behavior at the Republican National Convention. It takes brass balls to ad-lib for 12 minutes in front of 30 million people on live TV, just working with yourself and an empty chair.

Tutu: Bush, Blair should face trial at the Hague — Tutu, the retired Anglican Church's archbishop of South Africa, wrote in an op-ed piece for The Observer newspaper that the ex-leaders of Britain and the United States should be made to "answer for their actions." The Iraq war "has destabilized and polarized the world to a greater extent than any other conflict in history," wrote Tutu, who was awarded the Nobel prize in 1984. We've already established that none of the American political leadership will ever bear any domestic accountability for a trillion dollar war of choice launched under knowingly false pretenses, so I don't see why anyone should expect international accountability. (Via .) 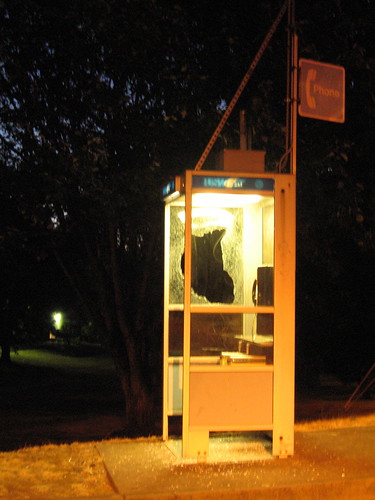 Again with the morning walk yesterday. That was nice. Once I got sorted out for the day, I had breakfast with Hugo award winner Lynne Thomas, who in her official capacity at Northern Illinois University is also my archivist. We talked about end of life and posthumous issues around my archives, with a lot of focus on electronic and Internet material. Not long after that, I met with my agent for a fairly similar conversation about my projects in progress and what might or might not come next.

I had a last minute invitation to be a guest on the SF Squeecast live recording session. Among other things, we discussed the movie Rubber [ imdb ], and I told the bear joke. (Which I originally got from Lynn Flewelling.)

The SF Squeecast in action

As a result of all this, I never really had lunch, just dropped straight into my reading. I read "The Cancer Catechism", my story in the new Dark Faith 2 anthology. That was moving and strange to read. Waterloo Productions showed up to film the reading.

I went down to the dealers' room to sign books at the Fairwood Press booth, then popped back upstairs for my final panel on Stalking the Elusive Story Idea.

After that, it was Hugo madness.

I'd found out literally two days ago that I would be presenting the Campbell tiara. I've done this before, but had assumed some other arrangement was in play this year. So I did the pre-ceremony walkthrough, then cruised upstairs to tux up. I was also invited to the Hugo reception, which is always fun. (Except that I never really had dinner, either.) Some awesome outfits there, including Seanan McGuire.

They were also giving out temporary tattoos of tardises, daleks and Hugo rockets. Jim C. Hines got his as a tramp stamp.

Me, I got a rocket on the forehead.

I'd told the artist to make it as obnoxiously colored as possible. I got a sparkly gay pride rocket, basically.

Me and Heather Shaw comparing rockets, photo by Sally McLennan

The ceremony was as always awesome. I celebrate the winners and commiserate with the losers. Also, I was quite pleased to help give E. Lily Yu her Campbell award. Afterwards, I got a picture of her and some friends and family, partly to show another example of Asian girl power.

The Hugo Loser's Party, and a quick tour of the other parties and bars to say farewell capped off my night.

This morning I went for a walk with Dani Martin.

Dani, and our view

I'm hanging out a bit more with Sally McLennan before hitting it for the airport and my trip to Baltimore, where Lisa Costello will put up with me all week. So I won't really have a Worldcon, day five.

It's been a blast, folks. Thank you everyone.

P.S. — Sorry I failed to tag everyone in the photos, but I am very tight for time as I make this post.