SkiffyandFanty Episode 112 — An Interview w/ Jay Lake — A podcast interview with me, by Skiffy and Fanty. Covers the release of the Endurance trade paperback edition, as well as a fair amount of discussion of my cancer.

Beyond the Matrix — The Wachowskis travel to even more mind-bending realms.

Tracking a Subtle Scent, a Dog May Help Save the Whales — (Via Dad.)

Researchers ponder what's next in volcanic Yellowstone — Caldera isn't ready to erupt, but we might have little warning when it is. If this doesn't concern you, you're not paying attention.

Spacecraft to starship? 35 years after launch, Voyager 1 is barreling toward the stars

Aliens at the Vatican! A History of the Vatican Meteorite Collection — Brother Guy Consolmagno, S.J., the Vatican Astronomer, will be speaking at the Cascadia Meteorite Laboratory fundraiser on Saturday, September 15th. Check it out and support an important Northwest science lab.

Smoke and mirrors — 'Agnotology', the art of spreading doubt (as pioneered by Big Tobacco), distorts the scepticism of research to obscure the truth. See also evolution denial, climate change denial, supply side economics, and very nearly every other core conservative belief. (Via Scrivner's Error.)

Holder Announces Impunity for Torture-Homicides — (Thanks to .)

QOTD: Gloria Borger — France? Really? This is what makes it so hard to respect so many of the most hardcore American conservatives -- their endless self-serving hypocrisy.

As Republican convention emphasizes diversity, racial incidents intrude — Gee, the party that's having trouble because they can't generate enough angry white guys isn't communicating well across racial lines? No one could have predicted this!

The Political Overconfidence of Republican Hard-liners 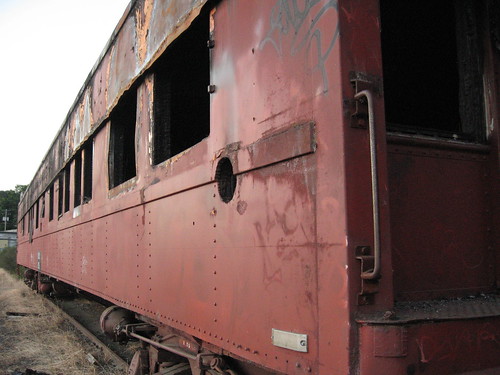 Chicon 7 was by almost any measure a successful experience for me. Lovely food was to be had. I caught up with old friends and made some new ones. I sustained a moderately full programming load with no difficulty, and had a lot of fun. I was interviewed for two podcasts, and gave well over a hundred autographs. Several rounds of writing and publishing business were conducted. I was invited to participate in the Hugo awards ceremony in my informal capacity as spokesmodel for the Campbell Award Regalia, and had a terrific time hearing thousands of people cheer my name as I made a brief stage appearance to crown E. Lily Yu. I never wiped out physically or socially, and the emotional stresses of cancer were largely kept under control, with a little help from my friends. I even managed to walk every day.

All in all, quite the satisfactory experience.

At the same time, by Sunday afternoon, I felt as if my head had been pounded into concrete. By Monday morning, I didn't really have the heart to face anyone or anything.

As I've said before, the current round of cancer will not be the one that kills me. I don't have a terminal diagnosis. I'm certainly not dying now. But it points toward overwhelming odds that I have a handful of years left. One fairly reasonable course forward from here has me never fully out of treatment again, depending on the speed and intensity of future metastasis development. Almost all of the forward paths have me spending more than half of what remains of my life very ill from either treatment or end-of-life decline.

As it happens, I was rather ill at both of the Worldcons prior to this one, in Reno and in Melbourne. There's a perfectly good chance I'll never make another Worldcon, depending on the treatment cycles of my cancer.

There were occasions where I explicitly acknowledged this. As I commented more than once, if we still beat this thing, then four or five years from now we'll all be sitting around laughing about what an idiot I was to be in such a panic back in 2012. That's one of those little bits of magic spell we pass socially to remove some of the awkwardness of being the ghost at the feast.

There were also occasions where the hard reality intruded brutally. On Sunday, I had an hour-long meeting with Lynne Thomas, of Northern Illinois University, who is my archivist. We explicitly discussed end-of-life and posthumous issues. I asked her a lot of questions about transition planning, about confidentiality, about how the archive would intersect with my literary estate. We got into topics such as the terms-of-service on my social media accounts and whether and how the library would have legal access to those accounts after my death. We talked a lot about how the archive will intersect with the interests of . She took home action items for herself, her technical team and her legal team, as I am essentially a test case for a number of issues. I took home corresponding action items, albeit somewhat less bedeviling.

Not long thereafter, I had an hour-long meeting meeting with my agent Jennifer Jackson. Again, we explicitly discussed end-of-life and posthumous issues. Literary executorship, contracts, a whole range of topics were covered. This includes discussion of my death book project. Again, I took home a number of further action items.

An hour or two after that, at my reading I read my short story, "The Cancer Catechism", which will be in Dark Faith 2. It's a brutal story. Reading it, I grew angrier and angrier. The audience seemed overwhelmed as well.

Walking out of that reading was the point at which I felt like my head had been pounded into concrete.

I am now in Baltimore, MD for a second opinion cancer consultation at Johns Hopkins Friday, September 7th. I am declaring an Open Dinner here in Baltimore this evening, Tuesday, September 4th. We'll meet at 7 pm at Ryan's Daughter, an Irish pub on East Belvedere Avenue in north Baltimore.

Also, if you've already responded, I don't need you to reply again. These reposts are because people always tell me later, "Oh, if I'd only known you were going to be there!"