Galloping Horses — Art guru James Gurney on the influence of the photography of Edweard Muybridge. This is some cool history.

Skull flower — Pareidolia on the hoof.

NY court to decide if lap dance is tax-exempt art — In Oregon, nude dancing is protected as artistic expression in the state constitution. Not sure why that's the case, but it is.

Putin leads young cranes in flight — Because, uh. Nope. I got nothing.

The First Lady of America — Ta-Nehisi Coates on Michelle Obama.

The Public Seems to Dislike Unified Government Even More Than Dysfunction

Mike Huckabee is lying. Again. — And Mike Huckabee is telling a particularly stupid lie. President Obama speaks in public, a lot. And almost every word he has said for the past several years has been recorded on video. So claiming that Obama never says something he says all the time — the president loves quoting the Declaration — either reveals Huckabee’s hamfistedness as a liar, or else it reveals his utter contempt for those in his audience, whom he assumes are too stupid not to just swallow every bogus word he feeds them. That last would pretty much be the basis of the entire Romney-Ryan campaign, which is explicitly and knowingly promoting massive lies.

Top Ten Ways we are Better off than in January 2009 — It is breathtaking impudence that Republicans should try to campaign on whether we are better off than were were in the last six months of the Bush administration. I can’t believe we are even arguing about this. Seriously? The country had fallen off a cliff in the last years of Bush, or rather had been pushed off one by GOP policies.

?otD: For me, would you make an exception? 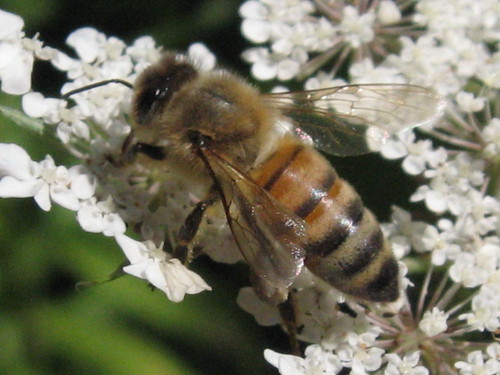 Last night, I went to dinner with Lisa Costello and a number of her closest friends. Which was pretty awesome to do. I wasn't terribly impressed with the food, but the company was very enjoyable. It's always odd, going to someone else's party. Some of these people have known each other since college, which is to say, more than three decades now.

Lisa is relocating to Portland next month. She's planning to share a house with Jersey Girl in Portland, conveniently close to Nuevo Rancho Lake. This means her lifelong friends are saying goodbye to her. And a good portion of this is probably my fault.

No rotten tomatoes were thrown, thankfully. I had worried a bit.

Sometimes there is great goodness, even in the middle of being inducted once more for my latest tour of duty in hell. This weekend will also be great goodness.

The result of my surgical oncologist's various interventions is that I have an appointment with one of his colleagues here in Baltimore at Johns Hopkins. Unfortunately, the doctor went to Brazil yesterday, and won't be back until Sunday. The first possible appointment was Monday.

I have accepted that appointment, and changed my return flight to Tuesday. This is very expensive. On the plus side, I'll spend a couple of more days with Lisa Costello.

In following up on that appointment, I discovered that the records transmittal from my hospital to Johns Hopkins was incomplete. This despite multiple people at Johns Hopkins assuring me they would contact me if there was any problem. I insisted they double check, and lo, records were missing for three of my four doctors. My hospital has faxed (or refaxed, I have no idea at which end the error lies) the relevant records.

All of this rescheduling has made an utter hash of next week's appointments and social plans. I have rescheduled Tuesday's port implant surgery, which is now set for Friday, September 14th at 6 am. The first chemo session has been postponed again to September 21st. That may change if the surgical plan changes after the Johns Hopkins meetings.

I am still seeing my therapist on Wednesday, and still getting a follow-up CT on Thursday. Also, still planning to keep my Wednesday lunch date with . Everything else is hash until I see if there's further fallout. This includes me waiting to reschedule various social cancellations.

I'm extremely frazzled right now. This is fundamentally a good thing, but the situation has become a logistical mess, to put it mildly.