The Adventures of Ensign Friend, Part 1 (Worldcon 2012 Report) — One of my more hilarious Worldcon moments, from another perspective. That was a lot of fun.

When the Personal is Important — Amy Sundberg on blogging and, well, me.

'Trillions of carats' of diamonds found under Russian asteroid crater

Dark energy camera snaps first images ahead of survey — "But I can't see anything."

Atomic Clocks To Measure Earth's Geoid From The Ground — Satellites give a rough picture of the Earth's geoid. Now physicists say atomic clock technology is ready to give a better picture from the ground.

eBay Users Have Until Nov. 9 To Opt Out Of Mandatory Binding Arbitration — Because, you know. (Via .)

We Are All Welfare Queens Now — Ta-Nehisi Coates on black citizenship in America.

The DNC was a win for Obama, but a loss for civil liberties — The official kick-off to the President's re-election campaign whitewashed his previous promises. (Via .)

Even Evangelicals Sorta Kinda Like Obamacare Now — But for all of the angry freakouts by conservatives who have claimed that Obamacare was going to be the end of the world as they knew it and the triumph of socialism over freedom, not a single person I spoke with could offer up concrete evidence that Obamacare was now or would ever be ruining their lives. Bruce Jones, from Liverpool, NY, who is retired from the military and thus gets generous health benefits from the government, conceded that it might be hard for people to point to anything specific about the law that might be hurting them. The opposition, he says, "it's more ideological now than anything real." That's what happens when you let ideology trump reality. (Snurched from Slacktivist Fred Clark.)

Romney's election chances depend on states with the largest count of people he considers freeloaders — Where do Mitt's 47% live? Mostly in Sarah Palin's "Real America". Funny, that. Good thing conservatives don't need the gubbimint for nothing! Not roads, not schools, not fire departments, not Social Security and Medicare. Nothing!

Chronicling Mitt's Mendacity, Vol. XXXIV — Towards the end of the interview, however, Romney looked ahead to the upcoming debates and said he'll have a challenge to deal with: "[T]he president tends to, how shall I say it, to say things that aren't true." There's no sense of shame and no sense of irony. We already know the Romney campaign isn't interested in the facts. They've said so themselves. Welcome to conservative America, a post-truth society.

Video: Romney hoped for American hostage "opportunity" — Stay classy, conservative America. It's what you do best. This man is your nominee. I really want to thank all my Republican friends who nominated Mitt Romney for helping everyone in the United States see the truth of what I've been yammering about for years: the moral rot and endemic hypocrisy of the conservative movement.

Where Will the GOP Go If It Loses 2012? — Conservative commentator Daniel Larison is fascinating.

?otD: Does the weather ever, ever do a thing for you? 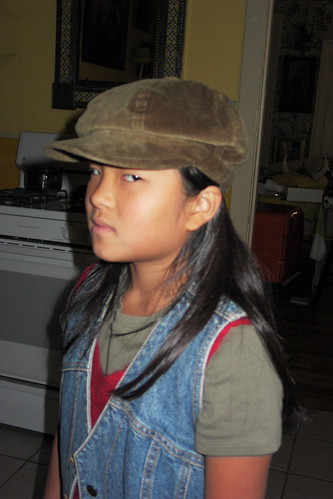 I've managed 4,200 words on a Green novelette in the past two days. She's in her late twenties in this story, and facing a problem she cannot solve through her usual rather questionable methods. It's fun to write this character in a more mature voice.

It's also good to be back to writing first draft prose after all the recent emotional and personal upheaval. I've remained fairly productive in terms of the business of writing, but new wordage has been elusive. Cancer is not good for my creative brain. Since I'm not likely to see less stress any time soon, I just need to adjust to living with it.

Having Green await my further attentions is a good way to accomplish that.

Did I mention I'm writing again?

On Monday, September 17th, prior to my second oncology consult at John Hopkins, I went to NASA's Goddard Space Flight Center with Ace Jordyn and Lisa Costello. We were guests of EW, a friend of Lisa's, who'd invited us over to show us a few things on the campus. We also had a generous invitation from a Goddard manager and blog reader, though time constraints kept us from also meeting up with her.

Thanks to a security snafu, Ace couldn't come on the grounds with us, but after some discussion, Lisa and I proceeded with our host. We were tight for time, so only saw a fraction of what there would have been to see there. EW took us first to see the assembly room where the James Webb Space Telescope is being built, then the centrifuge where they test space-based components. We then drove over to his office, where I met fellow SF writer Alan Smale. We also discovered NASA's secret stash of Doc Brown Delorean time machines while out there.

EW and Lisa Costello, at the assembly facility

Me and Alan Smale

Yes, that really is the JWST down inside all that yellow scaffolding

An engineering model of one of the mirror segments

The centrifuge, a real beast

The test chamber from an exterior view

A small, temporary clean room area within the centrifuge chamber

NASA's attic, stuff stored beneath the rotational path of the centrifuge — pretty sure the Lost Ark is in there somewhere

One of the Deloreans close up