Mountain Man — A very short film about me from Waterloo Productions. Which will make you laugh your ass off… (And yes, this really happened. It isn't just clever editing.)

Jay Lake on “The Fathomless Abyss” — In which I am interviewed at SF Signal by Charles Tan.

ALT/1977: WE ARE NOT TIME TRAVELERS — But we damn well should be. This is hilarious. Retro gadgets.

Collier’s: Gorgeous Art, Breathtaking Ideas — Days of future past for the space program.

Do the Bacteria in Your Gut Also Influence Your Mind? — My world can certainly be all about the poop, but then I'm not a baseline case.

Scientists ask for legal safeguards to keep their work out of court — Oil spill researchers have their preliminary data subpoenaed by BP.

Great Barrier Reef has lost half its corals since 1985, new study says — Remember kids, climate change is a liberal hoax. The Republican party says so. Who are you going to believe? Conservatives, or the evidence? Really. Nothing to see here, citizen. Move along.

The Last Four Years in One Quote — Ah, the miracle of the conservative mind. (Via Slacktivist Fred Clark.)

Food Stamp Ridicule Humiliates Woman At The Supermarket — This is a woman on dialysis, and public assistance, who says, "Most of the people that we have to choose from -- Obama with his spending and his health care reform, and then Mitt Romney, he just wants to let poor people die, so either way we're doomed. So I don’t see any point in voting." That spending and that healthcare reform is what's keeping her alive, but the conservative narrative so dutifully fostered in Your Liberal Media has convinced her it's a bad thing for the government to work to keep her alive. I could weep for this country.

Feeding perceptions of the U.S. abroad — Wayne Swan has launched a blistering attack on US Republicans, declaring "cranks and crazies" have taken over the party and have come to represent the No 1 threat to the world's biggest economy.

Arrested Man Snags Pics Of Cops Allegedly Searching His iPhone Without Subpoena — Huh, there's an app for that?

Top Florida Republicans have no advice for election officials about voter fraud by ... Republicans — But boy are they all over any potential fraud from likely Democratic voters. Because reasons. And ethics. Conservatives are made of ethics.

No, You're the Racist, or Blogging About Obama Phones — Mmm, the gentle art of political suasion.

Top Seven Errors President Obama has made on the Middle East — He's not doing a hell of a lot better than R. Money threatens to.

?otD: Are you the mermaid who took King Neptune for a ride? 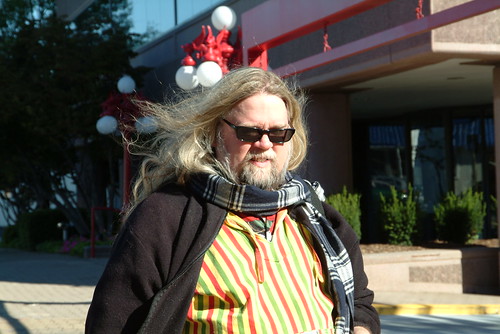 Yesterday, I spent an hour doing a first-pass edit of the Green novelette, "A Stranger Comes to Kalimpura". This wasn't really a prose edit, or a plot edit, or a redraft. It was a continuity edit. Which I don't usually need to do a heavy job of on short fiction.

This is what happens when one writes a story about a character and setting documented through three published novels and a handful of shorter pieces. Especially when writing with tendrils of chemo fog still writhing on one's brain.

So, for example, I knew I wanted Mother Adhiti in the story. She's a very minor character in the books, but has a distinctive personality and physicality that fit what I wanted to do in several scenes. As I was drafting, I knew what she looked like, how she would act and speak, but for the life of me, I could not remember her name. So she was Mother [Name] in about a dozen places, until I could bat clean-up with the manuscripts from all three novels open and searchable on my laptop.

Likewise the spelling of various place names, the orientation of landmarks, and so forth. None of which had any particularly deep effect on the story I wanted to tell. But that color, that detail, is what makes this a Green story, and not a story in some other similar, self-plagiarized setting. I'm not above filing the serial numbers off a failed experiment and retrying, but Green is hardly a failed experiment. So I had to get a bunch of things right.

I marked them in text with [brackets] as is my wont, and yesterday, I went on a search-and-destroy mission for [bracketed text]. The problem, of course, will be the mistakes I made without realizing it. The things I assumed I got right when I did not.

And, well, actually making the story work as narrative. But that's work for today, tomorrow, next week, as the mental weather allows.

The small Willamette Valley town of Jefferson, Oregon, has learned that their 150-year-old library building can no longer be used. They're working like crazy to build a new library, keeping the town and its people supplied with books, information and services.

Librarian Linda Baker is reaching out to authors seeking support through autographed copies of their work. They're also taking direct donations, and I imagine other forms of support as well. Though cancer is eating my wallet faster than I can replenish it, I'll at least be sending them some of my books.

Banned Books Week seems like a terrific time to help keep a small town library going. Whether you're an author, a reader, or just an interested human being, surf on over to the Jefferson Library Blogspot page to see how you might help.
Collapse