SFWA Northwest Reading Series — A quick reminder that this event takes place the 15th (in Portland) and the 16th (in Seattle). I'll be reading at the Portland event along with M.K. Hobson, hosted by Seanan McGuire.

Etymonline — An online etymological dictionary. You weren't doing anything else this weekend, were you? You're welcome. (Via a mailing list I'm on.)

A New Contest, Centered Around Usage — Fake linguistic prescriptivism, on the hoof. I think Poe's Law may apply here.

BREAKING: MAPLE SYRUP FOUND — A follow-up for those of you who fondly remember the recent coverage of the Global Strategic Maple Reserve theft.

Should You Go on Google's Field Trip? — The new app is an ingenious way to learn about what's around you—and points to a potential gold mine in location-based advertising.

A Tax Taxonomy — Interesting and funny little piece from Freakonomics.

Tucker Carlson Fails at Trolling — For those of you who like to pretend the media is overrun with liberal bias, do you think for a moment that the entire media establishment would have spent a day on fast spin over the alleged forthcoming leak of some Romney video? (Though in fairness, since the 47% thing splashed hard, maybe they would now.)

Reruns again? — In which Tucker Carlson, and conservatives in general, prove themselves idiots, yet again. In their own words, yet again, with that stupid video.

Akin's Campaign Stands By Claim Of Abortions On Women Who "Are Not Actually Pregnant" — Not on evil, but also stupid. Really, really stupid. In that special conservative way.

Marriage equality is a gateway to socialism? — Because reasons! Good conservative reasons! Do not trouble my beautiful mind with your stupid liberal "facts" and "definitions" and "dictionaries" and "reality"! Reasons, I tell you.

Attacked — On being mixed race in the GOP's America.

Romney Did As Well in the Debate As He Could Have Hoped — As far as Democrats were concerned, Romney had become such a wounded, joke candidate that he was almost fated to lose the debate no matter what he said. Because most Democrats underestimated Romney, there was a certain amount of shock in how well he was able to perform.

?otD: What's on your plate for Thursday? 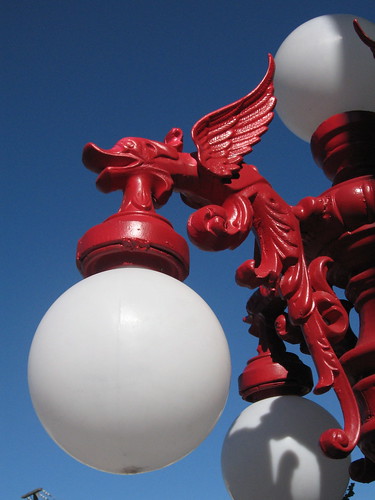 Recently, I posted about 's idea for observing this iteration of my cancer journey by sewing bells onto a length of cloth, much as Green does in my books.

I've now received three batches of bells, and am aware of more to come. Thank you to everyone who has sent them so far, and especially my thanks to my daughter for thinking of this.

You people are wonderful.

Another terrific batch via the Hemp Beadery, not sure who sent them

My sweetie Lisa Costello arrives in Portland today, thanks to the good offices of my best buddy helping her haul herself across the country.

Here's their trip, in three and a half days:

I am so terribly pleased. Ace Jordyn likewise. And pretty much everyone else around here as well.