A review of my novelette "A Long Walk Home"

A review of Mainspring — In my local library newsletter.

Scientists Use Stem Cells To Create Eggs In Mice

Black mamba venom could contain a fantastic painkiller — As effective as morphine, but with fewer downsides. Non-opiate painkillers are very important.

Would you kill baby Hitler? — Roger Ebert on biology, destiny and film.

The CIA and Jeff Bezos Bet on Quantum Computing — With funding from the Amazon founder and the CIA's investment arm, the Canadian company D-Wave is gaining momentum for its revolutionary approach to computing.

Are You Annoyed By the Right People? — This made me think, hard. (And I'm not even a Christian.) (Snurched from Slacktivist Fred Clark.)

Chick-fil-A’s Biblical Family of the Day — Chick-fil-A president Dan Cathy: “We support biblical families.” Today’s Chick-fil-A Biblical Family of the Day: Jephthah (Judges 11:30-40) See, he didn't mean the real Bible. He meant the Bible as American Christianists imagine it to be. The one that supports the prosperity gospel despite all of Jesus' words about the poor. The Bible that emphasizes gay hate, despite Jesus' total silence on that matter. The Bible that requires you to vote Republican or burn in hell, despite Jesus' avowed apolitical stance. That Bible. Not the real one that is biased against the conservative worldview.

US jobless rate falls to 7.8 pct., 44-month low — Despite the best efforts of Your Republican Party to keep the economy mired and deny President Obama any substantial achievements.

Every Way You Look at It, You Lose — Scrivener's Error on the presidential debates.

Another Reason Not to Trust Romney — One of the ongoing flaws in the Romney campaign is not just the tendency to make important errors, but its stubborn refusal to own up to those errors. The campaign has continued defending Romney’s blunders weeks or months later when a quick correction would have been far more effective in putting the issue to rest. And where does Romney's acknowledgment of the essentially stupidity of his 47% remarks leave all his conservative defenders who've been sticking up for that?

Romney lied about pre-existing conditions during debate — Romney claimed his plan protects people with pre-existing conditions. His adviser now admits it doesn’t. That doesn't matter. The Republicans are running a post-truth campaign, and the Romney message got out to the voters. That it was deliberately mendacious is something most of them will never realize, and many of the few that do hear it will dismiss the correction as liberal lies. This is how conservatives win elections in America. Not ideas. Not merit. Not truth. 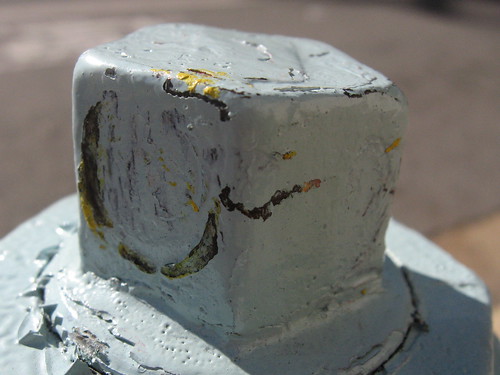 Got a package from my agent yesterday. The Russian edition of Green, and the German edition of Escapement were lodged therein.

As I go off for my second infusion of this third series of chemotherapy this morning, I have received more bells and some spoons in the mail.

Bells from a/k/a my mom, and AH

You guys are so wonderful.