Outlawed by Amazon DRM — A couple of days a go, my friend Linn sent me an e-mail, being very frustrated: Amazon just closed her account and wiped her Kindle. Without notice. Without explanation. This is DRM at it’s worst. If you think Amazon is your friend, you are sadly mistaken. A lesson I learned the hard way a couple of years ago myself. (Via .)

Daily Idioms — More like weekly, given the posting frequency, but ZOMG are these some amazingly cool links. (Via Lisa Costello.)

Soldiers Lost and Found: Students Rediscover the Fallen — History, one war casualty at a time. (Via .)

Elephants — Not to mention incendiary pigs and howdah pistols. And Special Forces field manuals. And, um, yeah. Because reasons, that's why! (Snurched from Daily Idioms.)

Dissolving electronics – medical sensors that disintegrate after a fixed time — This is some serious cool.

Mammatus Clouds Over Saskatchewan — I've seen these in Texas.

L'Aquila quake: Italy scientists guilty of manslaughter — This is kind of freaky. Has the American conservative "science is lies from the pit of hell" attitude infected Italian politics as well? Or let me put this more succinctly: this is fucking insane. More here.

Carbon dating to 50,000 years — An article in Friday’s Science magazine details how a team of scientists provided a calibration for carbon dating accurately to 50,000 years, or about 10 times the age of the earth according to many creationists. Amazing how accurate and detailed those lies from the pit of hell can be. Warning: Facts not valid for conservatives. (Via .)

Costumed Pa. girl mistaken for skunk, shot — Police say a costumed 9-year-old girl was accidentally shot outside a western Pennsylvania home during a Halloween party by a relative who thought she was a skunk. If you're one of America's gun owners, how's that whole defense of essential liberties thing working out for you? Sure worked out well for this kid, didn't it? I'll bet she's grateful as hell for the NRA and the GOP vigorously standing up for her right to be shot at a party.

CNN anchor to hate group: “I am a proud, card-carrying member” of the gay gestapo — Republicans think truth has a liberal bias, so they lie routinely as a matter of strategy.

Steve King: Comparing Immigrants To Dogs Was 'A Compliment' — Stay classy, conservative America. It's what you do best. (Via my Aunt M.)

Akin: McCaskill fetches expansive government “like a dog” — Mr. Legitimate Rape is at it again. Stay classy, conservative America. It's what you do best.

Can a businessman help the economy? For presidents, the answer has been no. — The startling bottom line is that the nation’s GDP has grown more than 45 times faster under presidents with little or no business experience than it has under presidents with successful business careers. And on average, when there has been a successful businessman in the Oval Office (so, Truman is excluded), GDP growth has been negligible. I've never understood why business experience is a selling point for political office. Governments are not for profit entities, nor are they non-profit entities in the 501©3 sense. (Via David Goldman.)

A ‘greatest hits’ of misleading Romney claims — Once again, we see the guiding principle of contemporary conservatism: When you can't win on your ideas, lie.

Romney’s Major Flip-Flops in the Third Debate — Remember when Republicans despised John Kerry for a flip-flopper? Yeah, neither do they.

Verdict on the Foreign Policy Debate — Conservative commentator Daniel Larison on last night's debate. A review of the transcript will show that Romney delivered a lot of incoherent answers, but that probably won’t hurt him with most viewers. Likely Republican voters in a nutshell, right there.

The Undisclosed Mitt Romney — With the presidential election just two weeks away, Romney’s gamble may be paying off. He has failed to specify where he would wield the budget knife, and he has defied, with a striking degree of success, the relatively quiet group of people who have called for him to honor a host of traditional disclosure and campaign practices. Post-truth campaigning is succeeding admirably for Romney and the GOP so far. Which may be a death knell for honest politics in America, insofar as they've been honest before this point.

?otD: What does a beaver do when she's lost and cold? 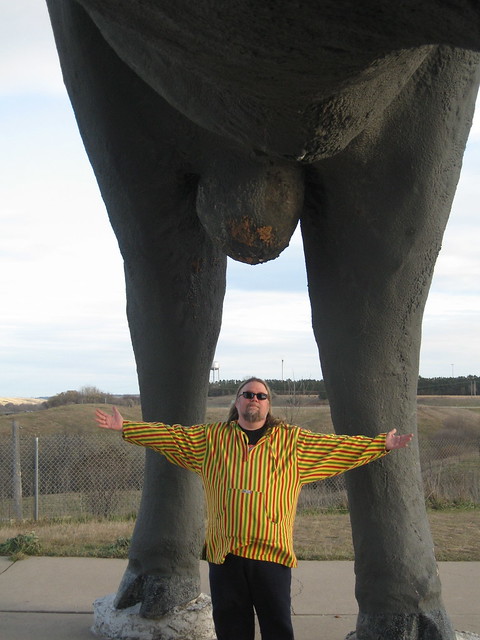 Spent about two and half hours revising my Green novelette "A Stranger Comes to Kalimpura". Oddly enough, I landed at 14,900 words, out of an originally targeted 15,000 words. Funny how that works out.

I treated this short piece like I treat novel revisions these days, with multiple reading and editing passes, as well as an audio pass. That is very much worth the trouble, though the final rounds of changes tend to be fairly subtle.

It was an interesting story to work on in other ways. For one thing, it's about an outside context problem. Admittedly, having Green resolve this is a bit of a cheat, since by definition, outside context problems can't be solved within the cultural framework in which they occur. On the other hand, since her very beginnings as a short story in Aeon magazine, long before there were three novels and half a dozen pieces of short fiction about her, Green has been a master recontextualizer.

For another thing, it's about Green at around thirty years of age. I had originally stated her age at twenty-five, but that created continuity conflicts with the final scenes of Kalimpura. The age of thirty nicely puts her daughter Marya at the same age as Green herself in the events of Endurance and Kalimpura, creating some strong implied conflict that I touch on only briefly in the course of "A Stranger Comes to Kalimpura", but that I might profitably revisit in future projects. Not to mention the whole "What is this ageing that steals upon me like a sunset shadow" thing that people start to go through when they begin to viscerally comprehend that they're not going to be young and beautiful forever.

Mostly, though, it was fun to finish a piece. Now "A Stranger Comes to Kalimpura" is off to market. We'll see what the editor thinks.

Next up, a Sekrit Projekt novella for which there has been substantial pre-gaming with the writing team involved. I'll announce when I can, but it's cool as hell, and getting cooler. I probably won't start laying down new prose today, as I have to do 60,000 or 70,000 words of background reading to refresh continuity before I begin writing, but I'll get all my pins set. When I emerge from the fog of this coming Friday's chemo session, I hope to write like a demon.