SP4: Tom Edison and His Amazing Telegraphic Harpoon by Jay Lake — A reader rather likes one of my Original Destiny, Manifest Sin short stories.

The US Navy wants great (rotating, detonating) balls of fire! — Looks to replace its gas turbine engines with rotating detonation versions. Sounds a lot like my ex-brother-in-law's turkey fryer to me.

DC comics pins Krypton to the star map — I love it when nerddoms cross over. I don't want to talk about nerd doms, though.

Still 'paranoid' after all these years — An interesting piece, up to a point, but it's painful watching the author struggle to find an equivalency between endemic and institutionalized Right wing paranoid illogic and something, anything, on the (American) Left. (He actually cites the Move On "Hitler" ad. (Helpful tip: One random Internet video from a private individual almost a decade ago doesn't exactly stack up against the Republican Party platform and the daily rhetoric from GOP politicians and candidates nationwide.) False equivalency reigns in the name of media balance.

Sandy Versus Katrina — ]T]he contrast between Sandy and Katrina demonstrates that leaders who hold government in contempt cannot provide that aid when it is needed.

Dems Want FBI To Probe Jeff Flake Polling Place Robocalls — The campaign Republican senatorial candidate in Arizona placed calls to Democrats directing them to the wrong polling places. That's the GOP m.o. nationwide right now: When you can't win on your ideas or your record, cheat. Hence all the weird restrictions on early voting and provisional ballots, all the voter suppression, the screaming about non-existent voter fraud.

'I don't want everybody to vote' — Late conservative activist Paul Weyrich in 1980, talking about voter turnout. "I don't want everybody to vote. Elections are not won by a majority of people. They never have been from the beginning of our country, and they are not now. As a matter of fact our leverage in the elections quite candidly goes up as the voting populace goes down." Which is a key difference between liberal-progressives and conservatives. I want everybody to vote, whether I agree with them or not. Conservatives across the country have manufactured outrage at non-existent voter fraud to justify a wide array of voter suppression techniques designed to bring home the state electoral votes for Romney. They've said so in so many words.

Visualizing the US Election 2012, with burgers & fries — Hah. (Thanks to Lisa Costello.)

Mitt Romney relying on teleprompters to deliver his closing speech — Remember when every Republican everywhere was loudly proclaiming that Obama's use of a teleprompter was prima facie evidence of his incompetence and unfitness for office? Yeah, neither do they.

Romney Willing to Win Without Honor — Mitt Romney kept quiet last week when the subject was rape and God’s will. He remained silent the week before when the news was all about Illinois factory workers pleading with him to stop his alma mater Bain Capital from offshoring their jobs. At no time this year did Mitt denounce Republican employers who threatened their workers if President Obama is re-elected or condemn repeated Republican legislative attempts to suppress Democratic votes. Well, duh. He's a Republican. The GOP gave up principles in favor of political expediency decades ago. All you have to do to understand this is look at their party platform and record in office.

Romney Refuses To Comment On Plans To Eliminate FEMA, 14 Times — Because principled consistency is the conservative way. Remember how they used to rail against the situationalist ethics of liberals? Yeah, neither do they. (Via Slacktivist Fred Clark.)

Can a ‘post-truth’ candidate be elected president? — If there is one constant to this campaign, it’s that Romney has startled many observers by operating from the basic premise that there is literally no set of boundaries he needs to follow when it comes to the veracity of his assertions, the transparency he provides about his fundraising and finances, and the specificity of his plans for the country. On the dishonesty front, this has grown more pronounced in recent days, with Romney’s embrace of the Jeep-to-China lie as a closing argument in Ohio and his absurd attacks on Obama for urging people to vote. (Via .)

?otD: What will we talk about tomorrow? 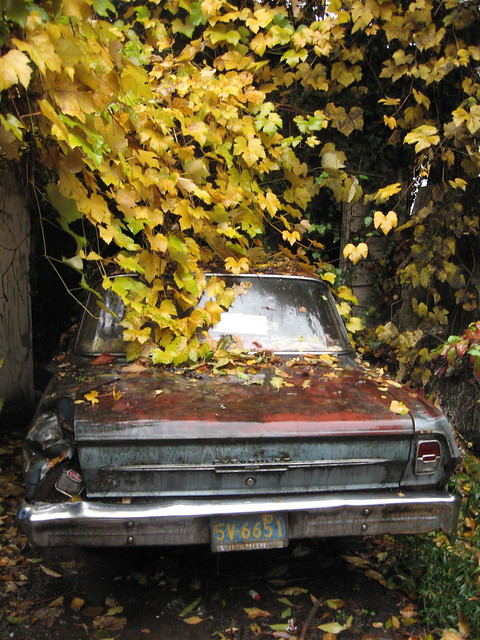 First and foremost, if you haven't already, go vote. Obviously I care passionately who gets elected, but your vote is yours, not mine. I'm not entitled to an opinion about how you vote, only about whether you vote. Even if you and I have diametrically opposed political views, I still think it's critical that we both vote. Call me idealistic, but I never thought the way to winning elections was to discourage the people I disagree with from voting. Quite the opposite, in fact.

For Oregon voters, here's some information on last minute voting.

Context for people who don't live in Oregon or Washington: All our elections are 100% vote by mail. We don't have Election Day polling places, though the county offices are open for ballot drop and for people who had trouble with their mail-in ballots. It's a clean, simple system that seems to optimize turn-out with virtually no fraud at all. Sometimes there are problems with people who've recently moved and may have two addresses, but that amounts to a literal handful of votes statewide in any given election cycle. I don't why all fifty states don't adopt this system — virtually all the nonsense about voter ID laws and limiting early voting simply vanishes with this system. It also eliminates all the issues around polling places and staffing and having the right forms and so on. Clean, simple and fair.

Note, per a brief discussion in comments yesterday with , that I do not favor some sort of permanent single party liberal-progressive government. I have no equivalent vision of the GOP's triumphalist Permanent Majority. We need a balance of viewpoints and opinions in government, simply because no one is right all the time, and solutions which are sensible under one set of circumstances can be destructive under other sets.

Whether that balance is best provided by a two-party system is another discussion entirely, but that's the system the United States has today. The only path I see to meaningful multiparty democracy in this country would involve a complete shattering of the Republican coalition. While I think that given the current nature of the Republican party that would probably be very good for the country, I find it unlikely to actually happen. There's way too much money tied up in GOP interests, and the media is too deeply invested in both conservative aims in general, and in their own conservative ownership and management.

My issue with the GOP and the conservative movement isn't their existence, or even necessarily their nominal aims as parsed through the lens of pre-Reagan conservatism. My issue is with the scorched earth, spoke-in-the-wheels style of politics the GOP practices in lieu of actually governing when they are in office. My issue is with the eliminationist politics of resentment the GOP absolutely relies on for votes, poisoning society and culture as a whole. My issue is with handing government over to people dedicated to drowning it in a bathtub, to people who believe that government is incapable of competence or effectiveness, and therefore govern incompetently and ineffectively.

The modern Republican party doesn't have a different vision of government than I do. They have a contract out on government. If they were interested in reform, or an alternate vision for the future, we'd have something to talk about. But despite the high minded rhetoric they throw around to make themselves feel good about decades of wholesale political and social vandalism, the GOP is a party that wants to destroy the village in order to save it. A village we all have to live in, regardless of whether we vote or who we vote for.

To put it in SF nerd terms, the GOP has become Frank Herbert's BuSab. And that's good for none of us. Not even the conservatives so busy setting fire to the village they live in.

So, yeah, I voted for Obama. Because I'd like there to be a functioning American government tomorrow, and next year, and next decade.