Skyfall review: James Bond from a Russian perspective — This is more interesting for the history of Russia's relationship with James Bond than for its comments on the newest release. (Thanks to Marta Murvosh.)

Why David Petraeus’s Gmail account is a national security issue

Where are all the millennial feminists? — I understand the frustration, but doesn't this count as a 'win' for feminism?

Memo to the Right Wing: Women Know You Really Have Our Backs — Hahahah. (Thanks to Marta Murvosh.)

It all makes sense now — A brilliant interpretation of gay marriage and legalized marijuana. (Via Lisa Costello.)

Mapping Racist Tweets in Response to President Obama's Re-election — Nope, no racism in conservative America. These are only "facts" and "data", which as any good conservative know have a conservative bias.

What The 2012 Election Would Have Looked Like Without Universal Suffrage — These five maps look at how the 2012 election would have played out before everyone could vote. No wonder the GOP worked so hard at suppressing votes. It really was the only way they could win.

Training up children in the way they should go — Slacktivist Fred Clark on Christianist brainwashing of children into reflexive homophobia, and how that distorts their thinking over the long term.

"Ex-Gay" Counsellor Arrested For Molestation Of Two Young Men — Hey, look, another Christianist homophobe caught fooling around with men. Because, yeah, insofar as I can tell, religious homophobia is major case of psychological projection every damn time. Any time I see a conservative preacher or political railing against teh gay, I assume self-loathing closet case. (Via Slacktivist Fred Clark.)

Why Didn’t Religion Matter More in This Election? — (Via Slacktivist Fred Clark.)

Fox News Guest: Obama Won by Lying About 'Rape Camps' Under Romney — Conservatives really are unhinged, on the plain face of their own words.

Rachel Maddow on Obama's Re-election — hio really did go to President Obama last night. And he really did win. And he really was born in Hawaii. And he really is legitimately President of the United States. Again. And the Bureau of Labor Statistics did not make up a fake unemployment rate last month. And the Congressional Research Service really can find no evidence that cutting taxes on rich people grows the economy. And the polls were not skewed to oversample Democrats And so on and so on.

Texas Republican Wants State To Leave U.S. Over Obama Win — “We must contest every single inch of ground and delay the baby-murdering, tax-raising socialists at every opportunity,” Morrison wrote. “But in due time, the maggots will have eaten every morsel of flesh off of the rotting corpse of the Republic, and therein lies our opportunity.” Apparently, Republicans only like representative democracy and Federalism when their guys win. Admittedly, this is pretty fringe stuff even by the very loose standards of the GOP, but still sadly unsurprising.

Florida's West refuses to relinquish seat in Congress to Murphy — Math says Allen West lost his Florida congressional seat to Democratic challenger Patrick Murphy. West begs to differ. That's the really great thing about being a conservative. When those liberal "facts" and "data" don't agree with your ideology, your ideology is always right. Conservatism cannot fail you, you can only fail conservatism.

Orca — Language Log is both funny and serious about the failure of Money Boo Boo's Orca software. 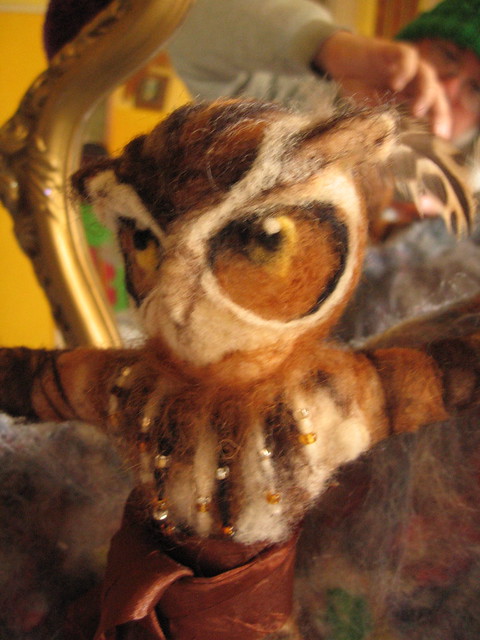 After last weekend's deconstruction of Chitty Chitty Bang Bang (1968) [ imdb ] as an ur-James Bond move [ jlake.com | LiveJournal ], we watched The Incredibles (2004) [ imdb ] during the week. A friend once described that as "the best 1970s James Bond movie never made". It also has some deconstructionist tendencies.

So, more with the deconstruction yesterday. Marta Murvosh, Lisa Costello and I watched a double feature of the director's extended cut of Watchmen (2009) [ imdb ], followed by Mystery Men (1999) [ imdb ]. Those movies are oddly well matched. First, cynical superheroes in a dying world (with some odd echoes of Incredibles, intended or not). Then, earnest not-quite-superheroes in a world sort of like Bladerunner filtered through Pleasantville. Plus, Herkimer Battle Jitney! And Geoffrey Rush! And bonus Tom Waites! In both cases, the superhero dialect is turned on its ear in different directions. If we'd had time, we could have watched Kick-Ass (2010) [ imdb ] for the trifecta.

I like to be entertained. I like to think. (Even through the chemo fog.) Watchmen and Mystery Men were a great way to do both those things and have a hell of a good time. Gently (and not-so-gently) mocking love letters to the superhero genre.

As The Shoveler says: "We've got a blind date with destiny... and it looks like she's ordered the lobster."

Got this email from my oncologist yesterday, excerpted and edit slightly for clarity:

Your CEA is up slightly to 4.6. I think we should get a CT scan the week of Nov 19th to see what is going on.

This is not good news, and is probably very bad news.

For those who haven't been following until recently, CEA is carcinoembryonic antigen. Per Wikipedia:

It is normally produced during fetal development, but the production of CEA stops before birth. It is not usually present in the blood of healthy adults, although levels are raised in heavy smokers. CEA is a glycosyl phosphatidyl inositol (GPI)-cell surface anchored glycoprotein whose specialized sialofucosylated glycoforms serve as functional colon carcinoma L-selectin and E-selectin ligands, which may be critical to the metastatic dissemination of colon carcinoma cells.

In other words, it's a tumor marker associated with my kind of cancer, especially in its metastatic form.

CEAs can manifest for other reasons. Wiki mentions smoking. Severe bowel inflammation can also cause CEAs to be present.

In my case, while I certainly have bowel inflammation as a result of chemotherapy's persistent ravaging of the cells lining my GI tract, my historical CEA levels over the past four years have not tracked with that problem. They have tracked inconsistently with the presence of tumor activity in my body. In brief, I've had low CEA levels during periods of tumor activity, but I've never had elevated CEA levels except during periods of tumor activity. That is to say, low CEAs are not an affirmative sign that I am cancer-free, but elevated CEAs are always associated with increased cancer activity.

Now, three rounds into my FOLFOX and Vectibix treatment, my CEAs are up to 4.6, about a 31% increase over the 3.5 measured last August when this metastatic presentation was first diagnosed. That would be what we in layman's terms call a trend in the wrong direction.

The cut off for clinically significant CEAs is 3.1, anything below that is considered normal. For reference, my all time high CEA was 10.9, 5/21/2011 during the early phases of dealing with my liver metastasis. My low CEAs are 0.2 to 0.3 when there's no tumor activity.

So, this likely doesn't mean my cancer has gone into runaway train mode. What is does (probably) mean is that something is growing when it really, really shouldn't be. My somewhat informed speculation as a long term cancer patient (over four and a half years with Stage IV colon cancer plus metastases) is that either the current multi-focal metastatic liver tumors (Bush, Cheney and Rumsfeld) are proving chemo-resistant and growing despite the current regimen, or that a new metastatic tumor or tumors have appeared elsewhere and are proving chemo-resistant.

Neither of these is a good thing, though I have no real notion which would be worse. "Worse" isn't really a concept that applies in my world anymore. Everything's bad, basically.

My special horror is that Rumsfeld, the tumor at the back of my liver adjacent to the peritoneum, has begun to interpenetrate the peritoneal wall, and that I now have peritoneal cancer as well. This is an issue I brought up with both my OHSU oncology team and my Johns Hopkins oncology team last summer, when I queried whether surgery could best come before chemo specifically to deal with that possibility, just in case this round of tumors proved chemo-resistant and continued to grow. All four oncologists I saw felt that chemo before surgery was a be a more responsible option.

If I was right, if this is peritoneal interpenetration generating the new spike in CEAs, I am going to have to ride myself my hard not to pitch a truly epic shit fit. It won't do any good if I do, after all. And it's not like anything in oncology can be stated with certainty. This is a medical specialty that relies almost entirely on statistical outcomes, and individual disease progression can only be observed in realtime, not forecast with sufficient accuracy.

My best guess now is that we'll stop this chemo, have surgery in early to mid December, and pick up with the newly approved fourth chemo series, which is based around a drug known as Regorafenib. This would put me on chemo through June or July, most likely, and mean the past two months have been a waste of time.

My emotional landscape on this is complex but unsurprising. If we have to abandon Vectibix, that's another year shaved off my already profoundly foreshortened life expectancy. If this is peritoneal disease (only one of a number of possibilities), it will not be the first time I've been right about something very important in which I was then overruled in by medical advice. No matter what it is, my fear and frustration and depression are all multiplied. I won't know much about any of this until the CT scan results are interpreted and released to me, likely not for a week to a week and a half. Uncertainty, of course, is my greatest demon.

Whatever this means, I will adapt and adjust. I always do. But for now, I am very, very upset.

ETA: This post was written while still on the 5-FU pump in the current round of chemo. My apologies for the larger number of typos and misstatements than usual.