Finding the Courage to Reveal a Fetish — All depends on who you hang out with, now, doesn't it?

Invisibility cloaking in 'perfect' demonstration — Scientists have succeeded in "cloaking" an object perfectly for the first time, rendering a centimetre-scale cylinder invisible to microwaves.

Online Courses Put Pressure on Third-World Universities — How a teacher in El Salvador became an advocate of massive open online courses, and why hardly anyone listens to him yet.

Would You Buy A Gun? — Women and guns. Just what America needs. More guns. Those thirty deaths a day from gun violence are certainly worth it, aren't they? (Via Marta Murvosh.)

"God Knew We Would Have Satellites": A Map of Jesus In Arabia — Uh, yeah. Pareidola run rampant.

When God is Your Lifeboat — If your way of thinking is that it is God's plan to have this Earth go to hell because in that said aforementioned deity is your lifeboat then what does it matter if life on this planet goes to "hell in a hand basket." Such thinking is delusional and Mr. Erickson in any other country would be dismissed as a lunatic not to mention as a seriously misguided practioncer of Christian theology. That line of thinking is starkly dangerous and should be universally condemned for what it is, insanity. (Via Slacktivist Fred Clark.)

Global warming felt by space junk, satellites — Manmade increases in carbon dioxide might be having effects that are larger than expected.

Pandas Threatened by Climate Change — Between 80 and 100 percent of livable habitat will disappear from a major panda enclave in China. Amazing, the lengths liberals will go to in order to perpetrate the climate change hoax. Including wiping out an entire major Chinese ecosphere. Thank god we have the Republican Party to keep us straight on this stuff.

Is America Ready for a White, Male Secretary of State? — John Boehner isn't white, he's orange, and we know he can cry. Maybe he should be tapped? (Via Marta Murvosh.)

How Oregon differed from nation on presidential vote — This article makes me proud of my adoptive home state.

Will politicians actually heed lessons of Sandy? — Not as long as ideology trumps reality in conservative America, no.

Mitch McConnell: 'We Have a Voter Mandate Not to Raise Taxes' — Give the GOP one vote, and they have a mandate. Must be nice, being able to choose the color of the sky in their world. Reminds me of Dick "Dick" Morris saying that a Romney 325 to 213 electoral win be a landslide, but an Obama 332 to 206 electoral was barely "eeked" [sic] out. Um, Dick... Numbers are magic when you're a conservative. 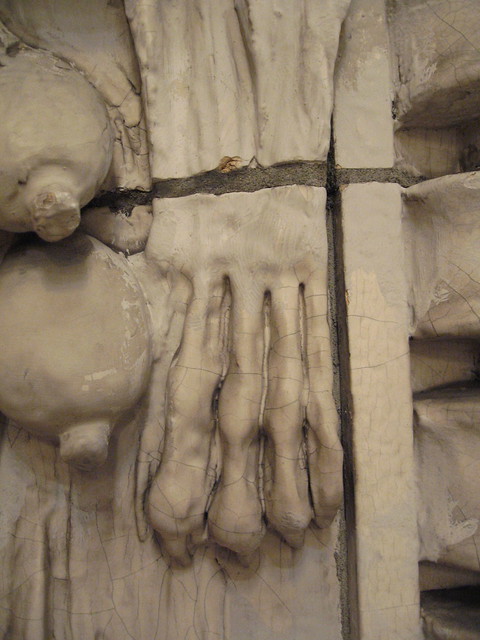 Yesterday I came off the needle. It was also a day with a very crowded house, which eventually became confusing, then overwhelming for me. I love my friends and family, I love visitors, but not always all the very same time. It didn't help that the de-needling process ran into some snags with retracting the Huber needle.

Mostly though I was in a mood due to the disturbing news about the CEA levels. [ jlake.com | LiveJournal ] There is one possible benign interpretation, that I'm experiencing a "CEA flare". However, I've never experienced such in the past, and my CEA response have always been a bit idiosyncratic. My oncologist doesn't seem to think this is likely either, though there's no point in further speculation until we see the imaging. (Beyond feeding my imagination, I suppose.) I'll be in to the oncology clinic this afternoon for my Neulasta shot, at which point we'll also schedule the CT and go from there.

There's some genetic testing available for my tumor tissue, that has done a lot of good work hooking me up for. Essentially, that's an option for verifying whether we're targeting my tumors with the right chemo drug series. It's way expensive, and almost certainly out of pocket as the procedure is still experimental, so a bunch of logistics and some fund raising may be in order. Not to mention some serious coordination between my hospital and the offering lab. Stuff to think about, stuff to do.

Note: This is a fusion of recent observations I have made in various posts, with some editing to pull it together.

There's something I've continued to wondered about since election night. Given the Romney
campaign's apparent astonishment at their loss, and other signals such as Karl Rove's near meltdown over FOX calling Ohio for Obama Tuesday night, I wonder if the GOP leadership thought they had the fix in with the voter ID restrictions, voting machine errors and early voting shenanigans in Florida, Pennsylvania and Ohio. We have a lot of evidence of that being the intention, such as PA State Rep. Mike Turzai's statement that voter ID laws were going to allow Romney to win the presidency.

My current hypothesis is that the GOP figured either on winning Florida, Pennsylvania and Ohio outright through a combination of voter suppression and a certain amount of ballot rigging (especially with the electronic voting machines in PA miscounting Obama votes for Romney), or to lose by a close enough margin that the voting irregularities would given them sufficient smokescreen to launch a Bush v. Gore attack on the outcomes. The clear lesson Republicans learned back in 2000 was that if conservatives can cloud the popular vote sufficiently, a partisan Supreme Court will hand them the presidency regardless of legal merit or national interest. The Supreme Court's own shame-faced disclaimer that their ruling in Bush v. Gore could not be considered as future precedent confirms this right on the plain face of the facts.

Under this hypothesis, the only way they could lose would be if Obama won by a large enough margin to make recounts and challenges moot. And given the GOP's demonstrated willingness to read polling data with the same ideological blinders they use for virtually everything else, that would have been the genuine surprise.

Maybe I'm being a bit too paranoid, but this idea would explain a lot of what's bothering many commentators around the Internet about the apparent utter lack of preparedness on the part of the Romney campaign for a loss. They had the fix in after all, with Rick Scott and John Husted and so forth. Nothing about that would be out of character for the way the GOP has operated in the Atwater-Ailes-Rove era since the rise of Reagan.

Combine this with the current conservative hysteria over the evils that will rain down on the country like Old Testament retribution now that Obama has been re-elected, and you have a very ugly portrait if completely unsurprising of the conservative mind. As I've said before, liberal-progressives were afraid of a Romney presidency precisely because of what he said he would do. Conservatives are afraid of an Obama presidency precisely because of what they imagine he might do. It's two completely different world views, reality and conservative mania, that don't even align well enough that they could reasonably be said to compete.

To that end, I hate to report that there are no black helicopters over my house, no FEMA troops in the streets, the local golf courses are all still open, and all the area churches seem to be open and prospering.