Summary: Asimov's, 2012 — Rich Horton with a year's summary, and kind things to say about my novella "The Stars Do Not Lie".

The Pacific island that never was — Sandy Island 'may turn up nearby' after geologists find no trace of it despite featuring on Google Earth and various maps.

The Cell and the Pyramid — Wow is this some cool microtech.

Electoral math for ‘all you climate people’ — [T]here’s important information in the fact that a senior reporter for a major network could dismiss climate change as essentially a special interest issue. The important information there is that in this area, at least, conservatives are winning their War on Reality. (Snurched from Steve Buchheit.)

Grand Old Planet — Paul Krugman: What was Mr. Rubio’s complaint about science teaching? That it might undermine children’s faith in what their parents told them to believe. And right there you have the modern G.O.P.’s attitude, not just toward biology, but toward everything: If evidence seems to contradict faith, suppress the evidence. Except I'd leave the word "seems" out of that last sentence. As for the GOP, likewise if evidence contradicts ideology. Speaking of the conservative War on Reality.

The science of antediluvian plushies — More on the marvelously endless idiocy of Biblical literalism.

We're living the dream; we just don't realize it — A commentary on the state of progress.

Five Things I Want My Daughters to Learn about Feminism — And one's sons, too, I should think.

DesJarlais: Regret past actions, no plans to resign — Shorter GOP Congressman: I'm now going to punish you for doing things that I did back when it was convenient for me to do them. Mmm, unbending ethics and intellectual consistency, those hallmarks of the modern conservative.

?otD: Don't the sun look angry to you? What do the trees look like? 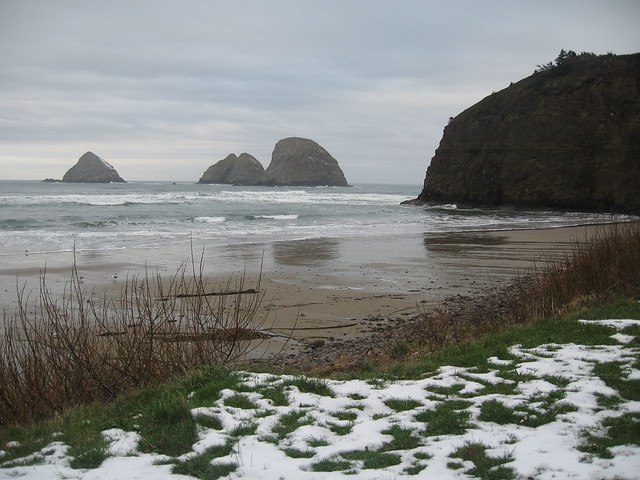 Yesterday ten of us got together for a post-Thanksgiving feast. My parents were back from Texas, Team E— was home from their travels, and H— was available. That meal was so good it hurt.

The menu was incredible. Team E— smoked a pork butt, spiced with rub special #1 augmented with ginger, black pepper and a touch of cinnamon. (a/k/a my mom) made knot rolls (again) and caesar salad. Jersey Girl in Portland made potatoes au gratin and carrots poached in butter with ginger and garlic. H— made Mama Stamberg's cranberry relish (which was righteous when matched up with the pork butt), and a very nice cranberry ring. My (step)mom brought roasted Brussels sprouts and Mama Dudley cake (think devil's food carpet bombed with fudge icing). I made roasted potatoes. Plus we had leftover apple pie from Thanksgiving.

The smell and taste trumped even my food issues. I ate the first full meal I've managed in weeks. ZOMG was it good...

This story keeps getting longer. My original estimate of 14,000 words has been blown wide open, given that I'm at 20,200 now, and probably going land somewhere between 22,000 and 24,000. That's okay. This piece is contracted but not to tight length. With luck, I'll finish the first draft sometime today.

A funny thing happened this writing week. Around the midpoint of the story there's an extended scene that really bothered me when I wrote it. Something was wrong with the motivations of the secondary characters in the scene, and my protagonist essentially got away with something important in a manner which didn't make sense either within the story's internal narrative continuity or from an external plot-and-structure perspective. I flagged it for attention on rewrite, and even remarked upon the problem to several people.

Well, a day or two ago, while writing, five or six thousand words deeper into the manuscript, the reason for the problem in the earlier scene presented itself in a manner which also tied up some threads from the previous two METAtropolis. Everything made sense in retrospect. What had felt like a pushover at the time turned out to be a set-up, and well justified in terms of the larger story arc. Fred, my writing mind, had been way the heck ahead me of the whole time.

From a purely craft perspective, writing on chemo is always strange. My writing brain is asleep at least half the time, if not more. That means when I pick up the draft again, I'm not in the straight through flow state I often achieve when writing short fiction. It makes the project more like a novel, from a craft point of view, in that the writing process is more interrupted and acontinuous. I have to rely heavily on written notes and rereading earlier sections to make sure I've got the voice right, the information reveals going on in the right order, a decent amount of character continuity, and so forth. More work spread out over less time plays merry hell with my productivity.

I am sad that this is probably the last piece of fiction I'll write before next May or June at the earliest. I may sneak in one or two much shorter stories before my brain evaporates, but I'm damned close now. And there might be a window of opportunity in January around my surgery break, depending on quickly and how well I bounce back from the chemo.

For now, I'm fairly pleased with this one.

Meanwhile, a little bit of WIP:

“Nice view, huh?” said Bibendum, his voice crackling over a dedicated suit-to-suit channel as he towed the both of them through empty space with a little powered sled to which the suits were closely tethered.

“You’re orbit-born, aren’t you?” Bashar asked, confirming an earlier thought. How had he gone all his life without ever seeing this view in person?

The kid replied in a disgusted tone. “You think they’d bother to lift someone like me out of the gravity well?”

“No.” Then reluctantly: “I have Yonami syndrome. It’s a genetic disorder that’s unrelated to being conceived or gestated in orbit. One or more of my grandparents got into some pretty toxic stuff. I also have friable bones, from growing up here. I can never go down the gravity well. Not if I want to keep on living.” That sounded like a rehearsed speech.

Bashar could almost feel sorry for the kid. At least, he would have if Bibendum weren’t neck deep in trying to murder a million people on Bashar’s own home turf.