Inclusion Linkfest — Jim C. Hines with some important links on diversity and inclusion in SF. And, I suppose, life in general.

Subterranean Prospector — Here are some pen and marker sketches for the cover of James Blaylock's 1984 science fiction novel "Digging Leviathan."

Aircraft Graveyard — God, do I love this image.

First Observation of Gravitational Waves Is 'Imminent' — Astronomers have underestimated the strength of gravitational waves, which means they ought to be able to see them now, say astrophysicists.

Namib Desert beetle inspires self-filling water bottle — A US start-up has turned to nature to help bring water to arid areas by drawing moisture from the air.

Traffic pollution tied to autism risk: study — I wonder if the anti-vax lunatics will pay any attention to this?

Fischer on Rubio: ‘Eyewitness account’ in Bible proves Earth created in 7 days — Not only is Fischer divorced from reality, he's divorced from his own Bible. Pretty sure the competing and mutually-contradictory-but-literally-true-and-infallibly-correct creation stories in Genesis 1 and Genesis 2 are not eyewitness accounts, even when viewed from the internal perspective of Christianity or Christianism either one. Also, to state the obvious, this link contains more of the intellectual cesspool of the Religious Right, so be warned. (Snurched from Slacktivist Fred Clark.)

Saudi Arabia implements electronic tracking system for women — This is what happens when you run your government on religious principles. And no, in this context there's no difference between Christianity and Islam from a secularist point of view. Both are religious systems that in certain incarnations feel compelled to control all of civil society according to their parochial and potentially toxic views. (Via David Goldman.)

Ugly law — From the late 1860s until the 1970s, several American cities had ugly laws making it illegal for persons with "unsightly or disgusting" disabilities to appear in public. Ah, those good old days Republicans are always longing for. (Snurched from Daily Idioms, Annotated.)

Your daily stupid — In which many angry conservatives are too historically ignorant to know that the Pledge of Allegiance didn't mention God until 1954, 62 years after its introduction.

Why Climate Deniers Have No Scientific Credibility - In One Pie Chart — Yep. Pretty much tells the story in one go. No one comes to climate change denialism on the basis of the evidence, any more than anyone comes to evolution denial on the basis of the evidence. Those are both faith-based delusions for which people madly search for post facto justification of in order to rationalize their position.

U.N.: Thawing permafrost to cause increased warming — The United Nations is warning that a thawing in the permafrost that covers almost a quarter of the northern hemisphere could "significantly amplify global warming." Amazing what those greedy liberal scientists will do to justify their lavish government grants. Actually arranging to thaw permafrost to keep their worldwide climate change conspiracy going. Thank God we have the Republican party and Rush Limbaugh to keep us straight in the face of those "facts" and "data".

High Places, Low Expectations — These are two unrelated issues that illustrate how standard misrepresentations and ideological clichés get woven together into resentment narratives that are rarely challenged in the conservative media, and never in the conservative evangelical media. And very often, they’re the work of people who should know better. Yup. This. Conservatism thrives on resentment narratives — that's the entire raison d'être of politicians like Sarah Palin, and is precisely how the GOP goes about generating those angry white men they need to keep Republicans in office. Not good ideas or constructive narratives or hope for the future. Resentment and fear. (Snurched from Slacktivist Fred Clark.)

Former Florida GOP leaders say voter suppression was reason they pushed new election law — Former GOP chair, governor - both on outs with party - say voter fraud wasn’t a concern, but reducing Democratic votes was. That's why people vote Republican: for the principled consistency and unwavering commitment to the democratic process. Unlike the ACORN scandal, which never existed except in GOP fever dreams, this is real voter fraud, from the other direction. Too bad they'll never be called to account for it.

The 47 Percent for Mitt Romney — Of the 10 states that receive the most federal spending relative to how much they contribute in taxes, Romney was the victor in all but New Mexico and Virginia, and in the end, he got his 47 percent. So the moochers did vote for Money Boo Boo.

Tom Ricks finally Tells Fox News (“GOP TV”) off on the Phony Benghazi “Issue” — More on why this nothingburger scandal is a nothingburger. Unfortunately that doesn't stop the GOP, especially Senator John McCain (R-Palin), from wasting words, airtime and political energy. That worked so well for another nothingburger scandal called Whitewater, after all, that they just can't help themselves.

?otD: Can you hear the wind blow? 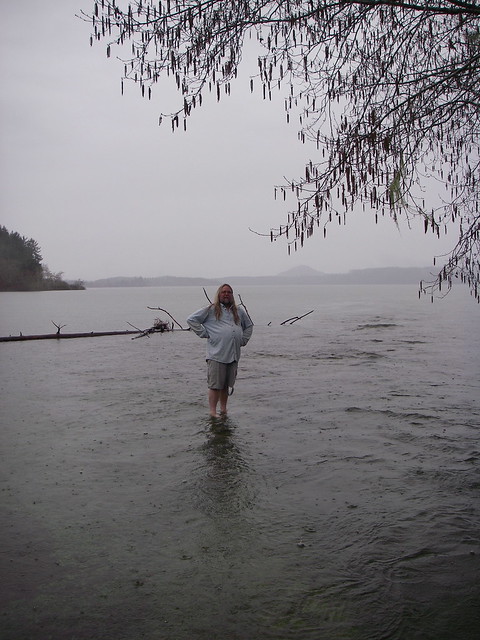 Yesterday's post about why I write so much about cancer [ jlake.com | LiveJournal ] drew some pretty interesting comments. I responded to a number of them in place. Both composing the post and reading the comments have sparked some further thoughts.

In no particular order…

One thing no one has ever said directly to me, or about me insofar as I'm aware, is that I've brought the cancer on myself through my emotional or spiritual conduct. I've seen this claim made in other contexts. This sort of victim-blaming is one of the most pernicious, evil things I can imagine saying to a cancer patient. If anyone ever did say that to me, I would violate my policy of not trying to create Internet dogpiles and tear them a new one up, down and sideways, right out in public. First of all, it's silly magical thinking of the first water. Second of all, it's just an unspeakably vicious way to talk about the disease.

On a related note, something else I have not seen, to my mild surprise given some of my history with certain other people on the Internet, is any assertion that I would somehow deserve this for being who I am. Sort of a real life version of the "die in a fire" thing some people like to say about people they disagree with. Again, magical thinking; again, vicious. Again, very grateful I haven't run into it.

So, yeah, I'll cope with comments about my dramatic oversharing.

Speaking of comments, pretty much boggled me with this one:

Fifty years ago, if you got a cancer diagnosis, you knew it was pretty much the end. Put your affairs in order, you are dying soon. Medical science has produced effective treatments that can prolong life significantly, and even cure the disease in some cases. Although on the face of it, that's a great thing, what has resulted is a uniquely tortuous liminal journal between terminality and life, one for which humans are in no way emotionally equipped. Are you equipped for a terminal diagnosis. By the grace of god, yes, you are. Are you equipped to spend five or ten years or your life *not knowing* at any given time whether you might be terminal? Absolutely not. Even the cure rates are cruel. In most cancers, it's a minority who are cured, and even the most dire-seeming cases have their rare cures. Is that a good thing? For the person getting cured, absolutely. For all of the rest of patients, who have been thrust into a Las Vegas slot machine situation, stuffing quarters in to save their lives, it becomes the highest stakes gamble of their entire lives.

If someone thinks you're being over dramatic, or over sharing, they better PRAY TO THE FUCKING ALMIGHTY that they never find out for themselves.

She reminds me of something I've said to my therapist a few times, that it would almost be a relief to have a terminal diagnosis. That's not suicidal ideation, and it's not a death wish in the more prosaic sense. It's my response to what Catherine so brilliantly refers to as "a uniquely tortuous liminal journal between terminality and life".

I really need to do some deep, patient thinking about that. Her words do a wonderful job of encapsulating so much of my personal anxiety and fear.

On a slightly related note, a friend of mine (unconnected to the writing community or my online community either one) died over the weekend very unexpectedly of heart failure. We weren't particularly close, but we've been on good terms for years as we crossed paths fairly often, and he had been very supportive of me in my cancer journey. His life was quite different from mine, and Jesus was very important to him, so perhaps that is some comfort to his wife and children. I am very saddened. I cannot imagine death is any easier when it comes swiftly as it did to him. I suppose he had less time to fear, but his family had less time to prepare. There are no good answers here.

Also, something I noted in my most recent re-read of Lois McMaster Bujold's Cryoburn (a novel that exists entirely for the purpose of setting up the last three words of the book, insofar as I'm concerned):

“All the worry people expend over not existing after they die, yet nary a one ever seems to spare a moment to worry about not having existed before they were conceived. Or at all.”

I like that a lot, though I can answer it well enough. Before I existed, there was no me to worry about being conceived or wonder what would happen next. Before I die, there is a me to worry about mortality, and wonder what will happen next. After I die, well, I'm just 10,000,000,000,000,000,000,000,000,000 atoms looking for a place to go. My cadaver will be donated to the medical school associated with the hospital where I receive treatment, to help train future doctors. My memory will live on in the hearts and minds of everyone who knew me, whatever they think of me. And, for a while, my books and stories will yet stand on some people's literal and metaphorical shelves. I'll be a grace note in a few personal histories, and in two or three generations more, I'll be little more than an entry in some genealogical tables and a footnote in the history of science fiction and fantasy.

I'm okay with that. I mean, I won't be here (or anywhere else) to know the difference. Erase me from history, erect statues to me, it's all the same once I'm gone. That's atheism for you.

It's what I do while I'm here that matters.

Tell me about a story I haven’t written, and I’ll give you one sentence from that story.