Sometimes there's no unitary rule — Language Log with more than (most of) you wanted to know about the who/whom distinction.

Grotto-esque — Art guru James Gurney with a neat little squib on the history of the grotesque.

Can a Jellyfish Unlock the Secret of Immortality? — Long but nifty piece on jellyfish, science and scientists.

For Winning The Nobel Prize, Niels Bohr Got A House With Free Beer — So was free beer the reason why Bohr was able to make great strides in developing quantum mechanics? (Via David Goldman.)

Mercury's water ice at north pole finally proven — Scientists have finally shown what has been postulated for decades: the planet Mercury holds billions of tonnes of water ice at its north pole.

Who Will Solve Wearable Computing’s “Jetpack” Problem? — Wearables are supposed to be the future of consumer tech–and that’s what’s holding them back.

Spaun, the new human brain simulator, can carry out tasks — I need this as a prosthetic.

Wormholes: not just for physicists anymore — A biologist investigates old illustrations to find new data about bugs. Heh. This is clever.

How Do Porcupines Mate? Very Carefully. — Their stark, night-piercing shrieks aren’t just about the quills. Yeah, I've been on dates like that. (Via Daily Idioms, Annotated.)

Central Auckland super brothel approved — Headline of the week. (Via .)

Heart Gadgets Test Privacy-Law Limits — I don't like to link to the Wall Street Journal because of their deep conservative bias, and lunatic mendacity of their editorial board, but this article is fascinating.

New Study Shows Global Warming Is Rapidly Melting Ice at Both Poles — A new international study—done by 47 experts using data from multiple satellites and aircraft—shows that the Earth is losing ice at an ever-increasing rate from both poles. We’ve known for years that the Arctic has been suffering massive ice loss, with the record low broken more than once in recent years. What’s devastating about this new report is that it shows unequivocally and quantitatively that the Antarctic is also losing land ice, with the critical West Antarctica ice sheet losing on average 65 billion tons of ice every year. This would be what we in the reality-based community call "data", which is therefore irrelevant to conservative beliefs and rhetoric. Just ask any Republican about climate change and see what answer you get.

How sensitive is the climate to added CO2? — 65 million years of Earth's history suggest we're in uncharted territory. Another great thing about science is that it doesn't have all the answers, so it keeps asking questions. This is where dogma, both religious and political, fails. When you already know the truth, you have a strong disincentive to ask further questions. Especially those that might challenge a closely-held and cherished belief masquerading as that truth.

A 60-Million-Year Debate on Grand Canyon’s Age — Note this is how science works. Disagreement and revision based on experimental data and field observation. Not reasoning backward from an ideological or faith based conclusion.

Complaints Aside, Most Face Lower Tax Burden Than in 1980 — This would be what we in the reality-based community call a "fact", which is therefore irrelevant to conservative beliefs and rhetoric. Just ask any Tea Partier about tax burdens and see what answer you get.

Legends of the Fault — Jon Stewart of The Daily Show displays the arrant hypocrisy of Sens. McCain and Graham in opposing Susan Rice, in their own words on videotape. See, it's ok to knowingly lie about foreign terrorism if you're a Republican, but not if you're a Democrat. That's about the only difference here. Except that Republican Condoleeza Rice never has clarified her statements or apologized, while Democrat Susan Rice has — which is clearly unforgivable to the same people who supported Rice's unrepentant lying. See the difference? More of that justly famed conservative intellectual consistency proudly on display from Sen. McCain (R-Palin) and friends. 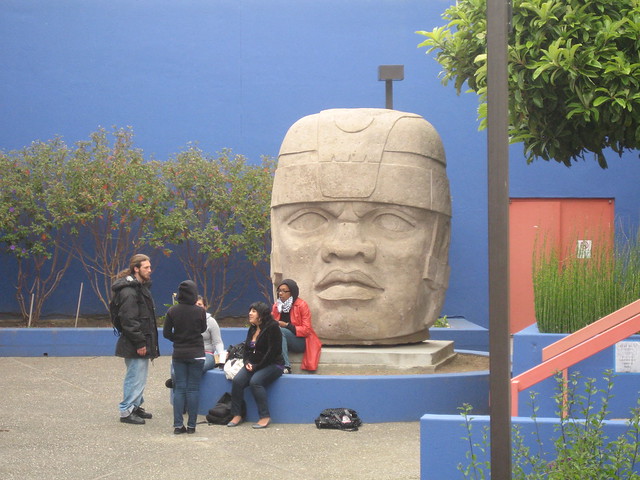 Wow, the dreams last night. I almost miss taking the Lorazepam, which is not a sentence I'd ever thought I'd say.

I had a really fitful night's sleep, surfacing into consciousness after every REM cycle. (This is how I sleep sometimes, especially when I'm in physical distress. Which is of course a continuous state of being on chemotherapy.) As is often the case with that sleep patterns, my dreams have a threaded commonality that extends from REM cycle to REM cycle.

I'm not even sure I can describe what I was dreaming about. It wasn't surreal, but the dreams were very crowded with imagery, color, people. In fact, crowding might have been the predominant theme. I was somewhere semitropical, surrounded by bougainvillea and and other bright flowers, at times crowded by children and their mothers in bright clothes, at other times struggling with traffic that consisted of classic cars in bright colors (sort of like an Andrew Niccol movie with the palette reversed). There was a slightly erotic episode when I encountered an old lover, there were extended bits about cooking, there was me jumping off a bridge into a river. And all of it was intensely, richly, fractally detailed across the senses, to the point of overwhelming. At one point I woke up in a state of frantic distress, breathing so rapidly and loudly that Lisa Costello woke up in fear for my health. I had to tell her I was not experiencing a seizure.

Sometimes my dreams are obvious garbage collection, the subconscious mind blowing the dust out of my mental and emotional buffers. Other times, they are obvious problem solving. Or obvious expressions of my anxieties and fears. Then, like last night, sometimes it seems like all the chocks were removed and my imagination went to the red line for no real reason I can understand. Not nightmares, mind you, just confusing.

If dreams are postcards from the subconscious, last night's dreaming was an ink spill in the postcard printing plant.

Yesterday I passed my blood tests and was cleared for chemo today. However, two items of note cropped up.

One, my neutrophil count is actually higher than the guidelines. Not by a huge amount, but it's noticeable. My oncologist isn't concerned, so I'm not, as insofar as I know I don't have any infections that such elevated counts might imply. In point of fact, with the chemo skip week, I feel pretty good.

However, my magnesium levels have dropped below minimums. I've measured 1.5 mg/Dl when the healthy norms are on a scale of 1.8 - 2.5 mg/Dl. See the chart below for trending. This is an expected side effect of my chemotherapy regimen. My oncologist has prescribed a magnesium supplement for me.

Of course, nothing is ever simple. The magnesium supplement and my Doxycycline do not get along well, so I cannot take it when I take my other pills. Now I have a lunchtime medication to go along with my morning and evening medications. Whee.

And of course, the potential side effects include stomach upset, nausea, vomiting, and diarrhea. Not unlike my everyday life already.

Regardless, I'll be at the infusion center at 8:30 am today. Another weekend on the pump. Sigh.