The Acts of Whimsy cancer fundraiser and the Lakeside Kickstarter for the documentary about me, , and cancer are still live. Both have made goal, but additional support is always welcome. Please check them out if you have not done so yet.

Dog and Cat Dress-Up for Great Justice — Cherie Priest with a steampunk pet fashion show as an Act of Whimsy in support of the cancer fundraiser on my behalf. Hahahah.

In Which I, John Scalzi, Sing a Lost Bob Dylan Song For Jay Lake — A musical interlude from our esteemed Mr. Scalzi. As the man himself says, harmonica is the new cowbell.

Jay Lake cancer fundraiser: expect a 3D scan of my head while making a funny face originated by John Scalzi — Cory Doctorow on the forthcoming scan of his head.

Human rites — Rituals bind us, in modern societies and prehistoric tribes alike. But can our loyalties stretch to all of humankind? Refleshing? Really? Wow. (Via Daily Idioms, Annotated.)

Mind over Map: the World Is What You Make It — Some interesting mind games with world maps.

In California, It’s U.S. vs. State Over Marijuana — I am strongly in favor of legalization, or at a minimum, significant decriminalization. Our drug laws are hypocritical at best in a culture that so strongly endorses alcohol, tobacco and caffeine. No dog in the fight personally (I've never even bothered to seek a medical marijuana card for my chemotherapy), just fairness and common sense.

IBM's Watson Gets A 'Swear Filter' After Learning The Urban Dictionary — Heh. (Via David Goldman.)

Tetrapod anatomy: Backbone back-to-front in early animals — Textbooks might have to be re-written when it comes to some of the earliest creatures, a study suggests.

NASA Awards $17.8M Contract For Inflatable Addition To Space Station — Sometimes the jokes just write themselves. For reals, this is cool and significant, but how can it not be funny?

Can This Man Save Pinball? — An arcade entrepreneur has a plan to resuscitate the dying pastime—with a little help from the Wizard of Oz. (Via .)

Dick Armey dishes dirt accidentally — Dick Armey had no idea he was speaking to the left-wing Media Matters organization during an interview last week, he told The Daily Caller Tuesday. Instead, Armey thought he was chatting with the conservative Media Research Center. (Via Slacktivist Fred Clark.) 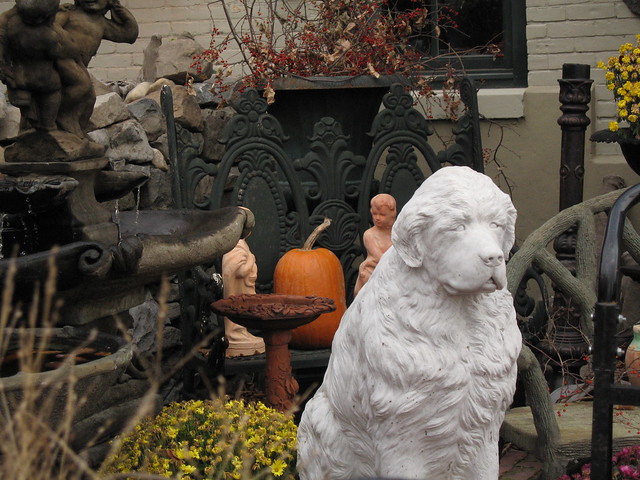 Yesterday, Jersey Girl in Portland and I went to see Django Unchained [ imdb ]. Roger Ebert and Ta-Nehisi Coates have already covered the angles on this movie much better than I could, so I commend you to their comments if you're considering the film, or even just wondering about it. Meanwhile, I'll add my two cents.

This is classic Tarentino. Everything from the typography of the opening credits to the score reflects film history: spaghetti westerns, blaxploitation films, revenge flicks. As critic John Shales once said of True Lies [ imdb ], this movie is so far over the top it makes all previous attempts at wretched excess seem like timid understatement. The viewer is signaled from the very beginning to simultaneously not take it too seriously, and yet to go deep with the film as it ventures into difficult and dangerous territory.

It's very hard to have an honest conversation about slavery in our culture. The defensive pride of Southern white culture (my birth culture, and that of my ancestors these past seven generations and more) colors our national consciousness deeply. Racism, both historical and present day, stains that national consciousness even more deeply. I don't believe I'd call Django Unchained an honest conversation, either, but it at least leverages an approach that isn't typical.

The movie relies heavily in stereotyping. This is explicitly acknowledged even within the film's narrative structure, and given the nature of the storytelling, I'm okay with it. Likewise, the geography is confused, to put it mildly, but the location shots were obviously chosen to emphasize the nature of individual scenes, not to document the landscape of Texas, Tennessee and Mississippi. A touch I liked was that the towns and people of the era were portrayed in realistic, muddy misery the likes of which I have not personally seen on film since Jim Jarmusch's Dead Man [ imdb ].

As for the characters, one rapidly falls in love, or at least in fascination, with both Christoph Walz' socipathically murderous Dr. King Schultz and Jamie Foxx' one-in-ten-thousand Django. Their "buddy" story arc is also stereotypical of film, but very well done. To that end, the deep cleverness of Schultz plays well against Django's relentless determination and nearly superhuman competence. Though the movie glaringly telegraphs us to focus on Django, I'm not sure this isn't really Schultz' story. He is more changed by events than Django. Django, after all, plays out his destiny, admittedly against tremendous odds. Still, he is becoming who he was apparently born to be. It is Schultz who materially changes the course of his life, and ultimately pays a larger price for his choices than Django does.

The other characters are so steeped in the era's unselfconscious immorality of slavery that they are chilling for that quality. We are supposed to be revulsed by and despise Leonardo DiCaprio's Calvin Candie, for example, and we are; but I ultimately found Samuel L. Jackson's character, Stephen, the lead house n****r (pardon the censorship, but that is the term the film uses, and it will cause this blog problems with search engines and filters if I spell it out), the most frightening character. His evil is perhaps the most relentless and appalling of them all.

I recommend this film highly, assuming you can tolerate Tarantino's signature penchant for exaggerated, bloody violence. The movie is at times funny, loving and moving, but it is overall impressive as heck.

Last night, the Acts of Whimsy cancer fundraiser crossed 200% of goal. Many deeply hilarious Acts of Whimsy have been unlocked, and I know there are more to come. Among other things, has recorded a "How to Write Like My Dad" video which is currently in post-production at Waterloo Productions, and will be offered as a stretch goal at a modest additional level of fundraising.

I want to emphasize again my profound thanks and appreciation to everyone who is participating. I am humbled beyond my capability to put into words, and grateful past measure. You guys are magnificent. Especially, my thanks to Mary Robinette Kowal and Catherine Shaffer for driving all this, and making so very much happen.

But I also wanted to say a couple of other things.

First, this fundraiser is at its heart for me to be able to pay for whole genome sequencing of my tumor tissue. That's what the initial 100% goal of $20,000 is for. The test alone costs $13,000, with OR costs, pathology costs, shipping and fees for interpretation adding as much as another $5,000. We rounded up to $20,000 because I also have to pay taxes on the money raised as income, since I am not personally a legally recognized charity or non-profit organization. (Insert obvious jokes here.)

The fundraising site explains this in detail, but the basic purpose of the testing is to determine if there are better treatment courses than the standard of care for my type of cancer. This is because a small percentage of cancers express themselves differently than their genetics would suggest. Diagnosis is done by presentation and tumor morphology, but the treatments are based on the presumed genetic signatures of the cancer. In other words, my cancer might be genetically kidney cancer (or whatever) despite presenting as colon cancer. If so, that would explain my poor responsiveness to chemotherapy over the past five years. We're almost at the end of the treatment flowcharts, and everything we've tried has failed. I'm not terminal yet, but the odds of me going terminal in the next couple of years are well above 90%. The testing gives us the possibility of another way out of this dead end, another treatment path that hopefully could lead to a cure, or at least significant life extension for me.

However, because this kind of testing is still experimental, not part of the routine standard of care, nor covered by insurance, it is expensive and non-trivial to procure. My tumor genome will also become part of the research process, as the companies, institutions and laboratories working on this project continue their efforts to prove the validity of whole genome testing for tumors. In other words, SCIENCE!!!

Your donated dollars are doing double duty to look for a way to save my life, as well as contributing to a long-term research effort that could eventually save millions of more lives.

What better way for a science fiction writer and the SF community to transmute the horrors of cancer into something approaching a public good? For this, I thank you.

Second, a few people have asked me how I plan to spend the money, since we are well over goal and continue to tick along nicely. The stated usage of the overage per the fund-raising site is for me to afford a leave of absence. I'm still considering exactly what to do about that. However, here is the current plan:

As you can see, there is really no level of goal achievement on this fund raiser that can't be put to good and immediate use.

Again, my profound thanks to everyone involved. I really appreciate the continued support. As does , Lisa Costello and my entire circle of friends, family and loved ones.