The Great Lake Conspiracy — A Mustache and the Mutt Mystery (Audio Drama for Jay Lake) — Skiffy and Fanty perpetrate another Act of Whimsy.

Genomic Analysis, the Office Edition — More on genetic sequencing and interpretation. (Via my Dad.)

China's Chicken Syndrome, and the Man in the Iron Curtain — Strange Maps gets a little weird.

The Author Himself Was a Cat in the Hat — Ted Geisel's toppers.

Court Rules Icelandic "Girl" Can Use Her Own Name — Weird.

How to Build a Nanotube Computer — IBM creates a new way to make faster and smaller transistors.

Last-stand Neanderthals queried — We may need to look again at the idea that a late Neanderthal population existed in southern Spain as recently as 35,000 years ago, a study suggests.

Noisy Sex Really Is Better Sex, Study Reveals — So much for my duct tape.

Tree ring history spurs actual climate science debate — Scientists argue about errors in tree ring records vs. cooling from volcanoes. This is science, constantly self-correcting based on new facts and data. Unlike ideology, which is right by definition regardless of facts and data. Guess which I choose?

Health Care’s Trick Coin — the entire evidence base for medicine has been undermined by a casual lack of transparency. (Via .)

Krugman: The NRA Is An ‘Insane Organization’ — They have this vision that we're living in a 'Mad Max' movie and that nothing can be done about it. Gun culture.

Memo Cites Legal Basis for Killing U.S. Citizens in Al Qaeda — In other words, summary execution without due process of law. No. 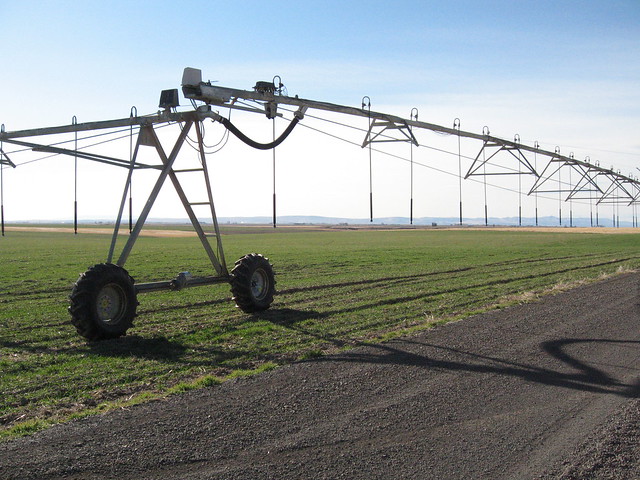 I'm on Vectibix, which is an anti-EGFR monoclonal antibody. One side effect of this type of drug is excessive eyelash growth.

I am not kidding.

Of late my vision has been getting foggy due to runaway eyelash growth. And people have been commenting on my unusually lush eyelashes, included various nurses while I was in the hospital recently. So last night, and Mother of the Child undertook to trim my eyelashes. Lisa Costello was kind enough to photo document. (Note this is a profound act of trust in your trimmer's very steady hands.) 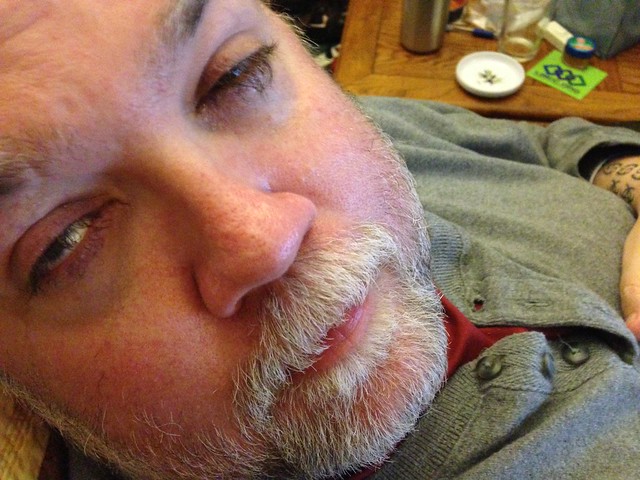 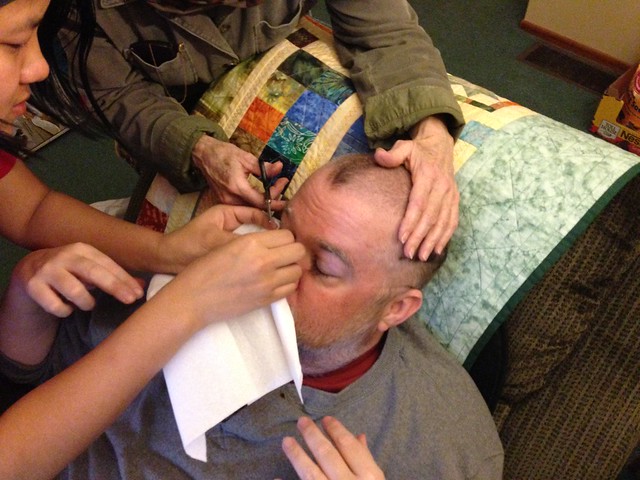 The operation in progress 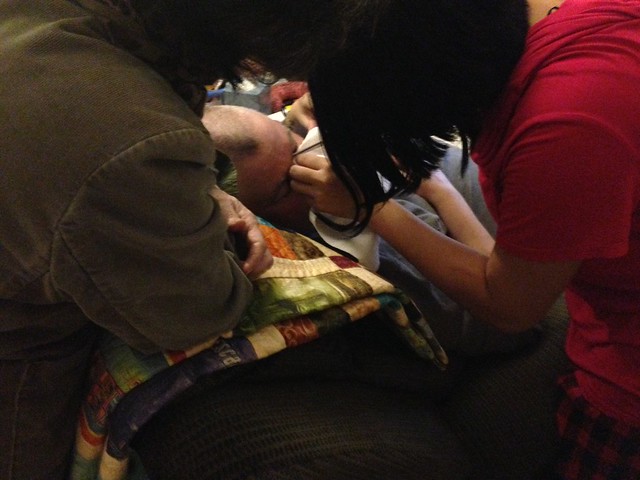 Me, trying not to struggle

Yeah, cancer is weird. The Great Eyelash Caper of Ought Thirteen brought to you by my disease and its discontents.

I saw my medical oncologist yesterday. Dad and Lisa came with me, because of the increasingly complex situation.

The basic takeaway is that we are no longer treating me with the expectation of a cure, but rather we are treating me for life extension and quality of life.

The tumors in my lesser omentum and my thoracic diaphragm are most likely a spread from the liver, rather than a new set of systemic metastases. (This is good news.) Beyond that, things are pretty much as expected.

I will have a CT scan every two months to check for new metastases. It is reasonable to assume that they will appear fairly quickly, perhaps in a six-month time frame. In the mean time, as of early March I will resume Vectibix infusions every two weeks, but we are abandoning the FOLFOX infusions as ineffective. This means chemo will be two hours every other Friday afternoon, rather than all weekend with a Monday recovery day. I will also be a lot more energetic and less fatigued, and possibly my writing window will stay open these next months. The Vectibix will stay in play indefinitely, until my next metastasis, so I'll be wrestling with extreme photosensitivity and terrible skin conditions for some time to come.

When the next metastases appear, we will have another round of surgery, then switch to Vectibix and Irinotecan. The mets after that will be addressed with further surgery and infusions of Regorafenib. After that, we are out of chemo options except for the possibility of enrolling in an experimental study somewhere.

The game is over either (a) when I metastasize in a location which is not surgically addressable, such as my liver stem or my lymphatic system, or (b) when we run out of chemo options to treat a new metastasis with. At that point, I will go terminal.

There is still some modest hope that the genomic sequencing will produce a new option which may lead to a cure. Likewise, we are seeking a second opinion at a major national cancer center (not yet confirmed), and there is some hope to be had from the possibility of successfully participating in a study. Frankly, the odds of any of these succeeding are small, but I am not giving up.

I continue to work with Dad on planning for disability leave and end-of-life issues, but that is planning ahead. I am not terminal now, and won't become terminal until one of the conditions mentioned above is met. That could be in a few months or a few years. Once I become terminal, we are probably looking at six months to a year.

On Wednesday (tomorrow) I am seeing my surgical oncologist for a post-operative followup, but other than some administrative issues around the genomic sequencing results, I don't expect any new information from that visit.

I have seen the future brother, and it is murder.

Meanwhile, life is for living.