And Then There Was One — Scrivener's Error on the Macmillan settlement in the DOJ's antitrust case.

Don’t Take Medical Advice From the New York Times Magazine — The dangerous chemophobia behind its popular story about childhood arthritis. (Via David Goldman.)

The Funniest Traffic Jam Outside of Hollywood — (Via .)

How the Gun-Control Movement Got Smart — Why are advocates so optimistic now when reform has failed so many times before? Because they have a totally new strategy.

QotD?: Is it showtime here on the edge of the stage? 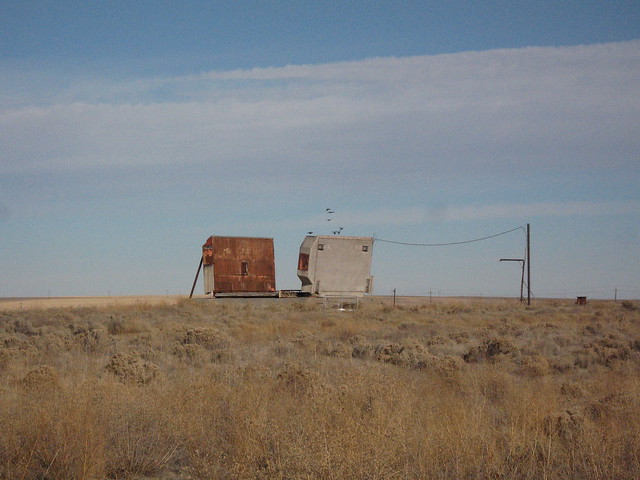 A few years ago, I started writing about my biography, informally and occasionally. I had a fairly unusual childhood, and questions about it come up often enough in interviews and conversations that I'd like to discuss it. I'm not going to focus on the objective details, so much as my own sense of my experiences, and how they might have led to where I am today.

I'll add to this series on an irregular basis as the spirit moves me. Feel free to ask questions, or treat this as a meme and discuss your own recollections.

My sister and I moved to Austin, Texas with our mother when she and our dad separated around 1968. I don't remember much about those years, but have a vague memory of living in two different houses during that time, and attending pre-school or kindergarten (I'm not sure which). 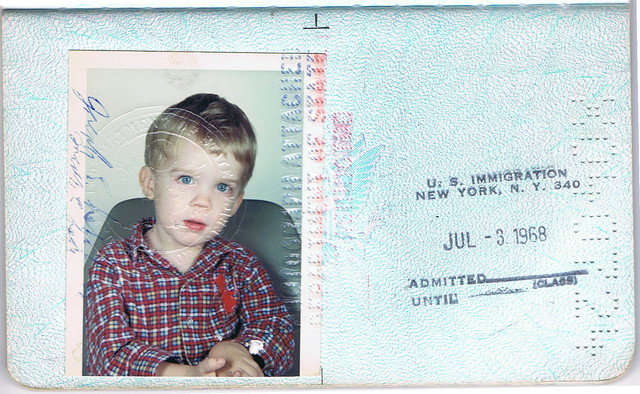 One house was on a hill where the Mopac-West Sixth Street interchange now stands. The entire neighborhood was later torn down to bring the highway through. At the time, it was just a place with a railroad track running through it. I remember us kids would go play in the creekbed below, where Johnson Creek ran along below the right of way. One time I managed to fall down some distance onto my head, giving myself the first of my closed head injuries, while also rendering young Jay bloody and unconscious. This did not go over well with my mother. And I still have a small scar in my left eyebrow where the scalp split was.

I only recall two things about my school back then. One is a brief flash of memory of a girl in my class choking on her milk, and having the white fluid come out of her nostrils in two streams. I thought this was the coolest thing in the world, and wished I could do it, too. The other was that we had mandatory naptime. Now, I'm very bad at keeping quiet and still. If I were ten or fifteen years younger, I'm sure I would have been a prime candidate for Ritalin. The way it worked in my class was that whoever was the quietest naptime kid got to be the wake-up fairy, and go around one by one tapping the other kids to get up. Well, that was never me, since I always twitched and huffed and wriggled through naptime. Likewise, as I was a poorly socialized loudmouth even then, and was not particularly popular with my classmates (a situation that persisted right into college), I was almost always last picked to wake up. It's a specialized kind of torture, to force a kid who isn't naturally quiet and hates taking naps to lie still for twenty minutes, then arrange the social structure so he's always the last to be set free.

I have a third memory of those days, sort of a memory of a memory, of taking my wagon to the little store nearby to purchase bread and milk for my mother. I also think I remember a solar eclipse, around 1969 or 1970, but I can't place that.

I do know there was time with my Lake grandparents somewhere in there, but I don't recall it directly, and can't place that in a timeline.

Around that time, my mother lost custody of us kids to my father. In 1969 (or so), to a single dad. Think about how unusual that is. My sister and I went to Washington, DC to live with him. His parents moved in with us, and my Granddaddy Lake was primary caregiver through my first-grade year. Which, given how incredibly Old School a white southern man my Granddady Lake was is rather mind boggling in retrospect. Grandmother Lake was quite ill at that time, and my memory is that she was bedridden. My sister and I shared a room next to hers, and were enjoined to strict silence at all times while in our room so as not to disturb her. This did not go over so well.

I should say one of my memories of Grandmother Lake is from some unspecified time around that same part of my life, being with her at their house in Gainesville, TX. It was a magnificent Victorian with giant pocket doors and stained glass windows, that is now a B&B which still has my grandfather's nameplate on the door jamb, along with a medallion celebrating rural electrification. They had a dining room set which had come out of a castle in Germany. You could literally have stashed a parted-out Volkswagen Beetle in the china cabinet, it was so huge. 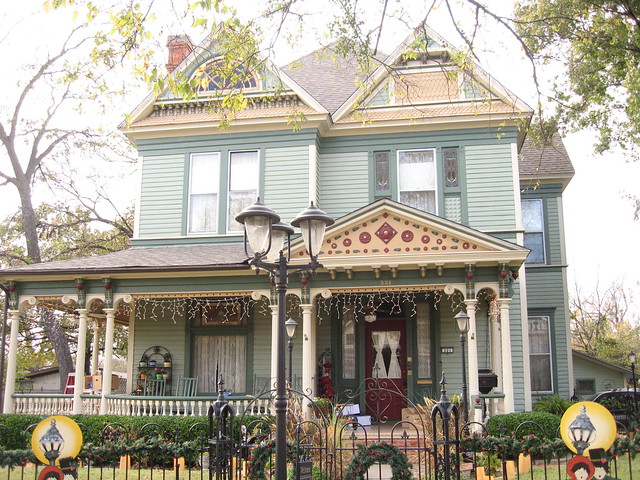 The Gainesville house, in 2007 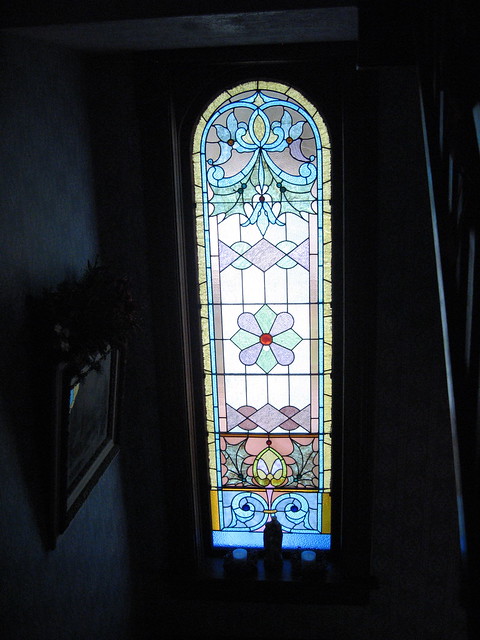 One of the stained glass windows in the stairwell

Grandmother apparently really liked The Little Rascals, but she didn't really want to admit that. So whenever the time was right, she would announce to me that my favorite show was on, and generously offer to watch it with me. We'd sit down together, and watch something that made very little sense to me, but made Grandmother happy.

At any rate, back in Washington it was decided that due to my notable clumsiness and malcoordination I should take ballet lessons. The only boy among two dozen giggling girls, this was deeply humiliating to me. It also didn't help my klutziness a bit. I was also sent to a rather drastically conservative Sunday school at the nearby Disciples of Christ church, which is where I first found myself wondering how a supposedly just and loving God could murder thousands of the firstborn of Egypt, who demonstrably hadn't done anything, just to make a point to Pharaoh; and why we celebrated this as a miracle of Passover.

In that period, my Dad and (step)Mom got married, on the front porch of our house. 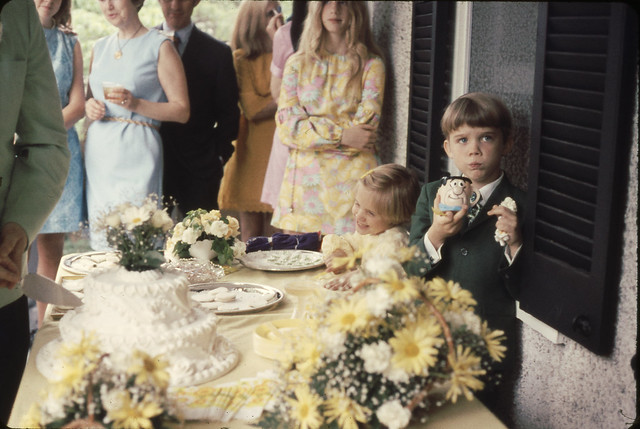 Me at the reception, with my sister to the left of me 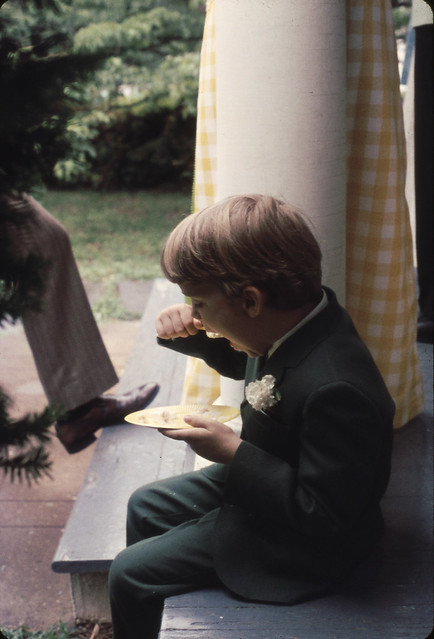 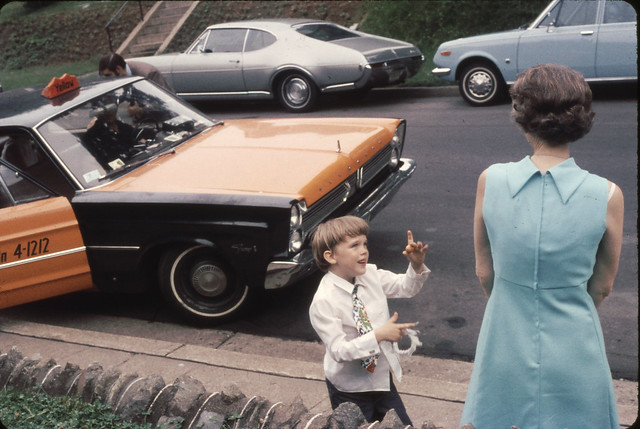 Me, holding forth to my Grandma Kessler, in a pose that is tiresomely familiar to all my friends and loved ones

Immediately thereafter, we headed to Taiwan, which is where my more collected memories really come into play.

This period of my life was marked by a lot of disruption and unwelcome change. The groundwork for much of my later serious, chronic depression was laid, though in truth I don't remember that time badly at all. Really, it was a transition from the earlier period of family life to the second period of family life, a long pause where I learned some misplaced lessons about trust and permanence which took me years to unlearn later on. And, of course, kept my view of the world churned and churning, feeding what would eventually develop into my writer's mind.

This work by Joseph E. Lake, Jr. and others is licensed under a Creative Commons Attribution-Noncommercial-Share Alike 3.0 United States License.

Had a nice dinner last night here in Seattle at the Bellevue location of Maggiano's. 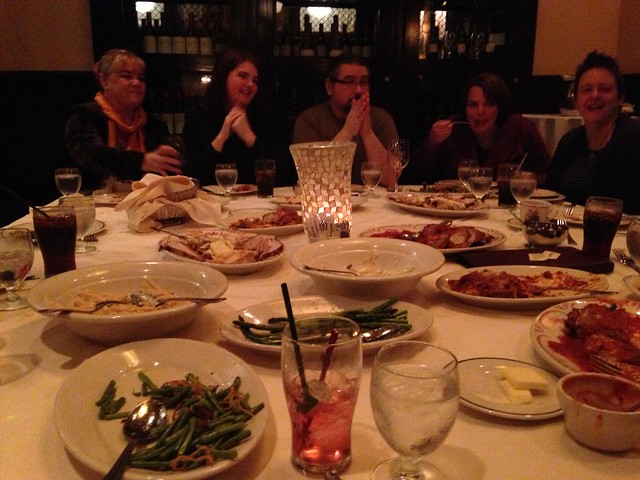 Eighteen people in all, so that we overflowed the banquet room had to calve off a small sub-party. More food than twice our number could have eaten, and quite good.

Lisa Costello and I are hanging with the Pitts family this morning, then off to a small brunch, then heading home, so's I can see by suppertime, and hear all about her weekend at the beach with her mother.

Back in the saddle tomorrow, including the usual Day Jobbery as well as a telephone consultation with an oncological geneticist.