Mass Production for Genomics — Sequencing a complete human genome may soon cost less than an iPhone. Will China’s BGI-Shenzhen decode yours? Mine cost $13,000. The perils of being an early adopter...

Lewis Cass Technical High School — Haunting photos of the decay of a school. (Thanks to .)

Researchers Control Animals’ Movements with Light — he response is not dependent on the fish perceiving the light—embryonic fish treated with the chemical react to light even before their eyes develop, and decapitated adults respond as well. Wow, working in that lab must be a barrel of laughs.

Bionic Muscles Toughen Up — Hybrid materials made of cardiac cells and carbon nanotubes might patch damaged hearts and provide muscle for robots made of living tissues.

Bend man shot by wife's gun improving — Carney said a preliminary investigation revealed that Richard Lee Cooper, 47, and wife Barbara Annette Masters, 48, were sitting in the restaurant’s dining area when Masters leaned forward and the gun fell out of her pocket and hit the floor. The impact with the floor caused the gun to go off, with the bullet striking Cooper in the abdomen, he said. Think how much less safe he would have been if his wife hadn't been carrying a handgun. A bullet in the gut is a small price to pay for self-defense. Moar gunz!

Proper response to the State of the Union address — GOP needs fresh method to deliver message. And maybe a fresh message, too.

The Excellent Age of No-Fuss Drones and Remarkable War — Ta-Nehisi Coates on American exceptionalism. But our real problem is that we somehow think we're above our own interests, that our virtue is divine. Our problem is we think we're better than we actually are. We've gotten so good at telling ourselves this. This.

Will Obama Stand up to the Keystone XL Pipeline & Climate-Destroying Tar Sands?

QotD?: Are you stepping out into the night? 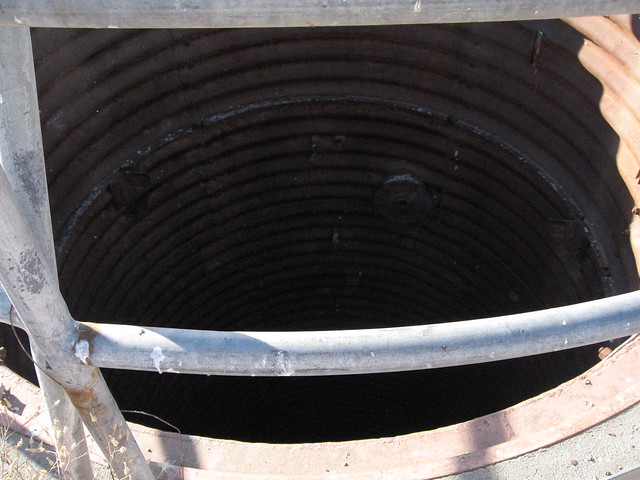 Yesterday, before leaving Seattle for Portland, Lisa Costello and I visited with a friend whose cancer is more advanced than mine. They are already in that state which I am approaching of having outrun all the available treatments in the normal clinical path, and are currently depending on drug trials to keep them alive. As it happens, this friend's family has emotional difficulty in engaging with their treatment and prognosis, so they don't get to talk about the disease and its discontents in frank and clear terms very often.

We are both dead men walking, this friend and I. Formally classified as incurable. Looking to treatments that might keep us alive another few months or a year or two. Hoping the metastases don't recur quite so quickly next time. Dreaming of a cure which, while still theoretically possible, is unlikely to the point of vanishingly so.

When two people in this situation know each other well enough to speak freely, the conversation quickly grows brutal. The three of us had met in a coffee shop in a Seattle suburb, and the lady at the next table kept glancing up at us with a horrified expression on her face. I'm honestly not sure how Lisa kept her composure as well as she did.

But there are home truths that occupy your mind and soul when you walk the paths of the dead. And this is a very expensive game of diminishing returns. Cancer is smart, and adaptable. A new drug which works for six months or year then loses its effectiveness. And treatments are horrifically expensive. In my case, we are closing in on a lifetime cost of a million dollars, at adjusted insurance contract rates. January alone was a $100,000 month for me, thanks to surgery and hospitalization. My friend commented that their current drug trial, which is fairly successful for them, requires out of state travel every two to four weeks to the research center, and when the trial ends, they will probably have no access to that drug at any price, as its not yet FDA-approved. That moves things from the category of "expensive" to "impossible".

So, like Odysseus seeking Ithaca, late stage cancer patients voyage from island to island, risking being turned into pigs or drawn into the sirens' fatal embrace for the sake of one of more hit, one more high, one more extension on our tenuous and already cancelled lease on life. We are junkies desperate to stay in the light just a little longer before we descend so deeply into the paths of the dead that no pharmaceutical Orpheus will ever be able to sing us back to the lands of the living.

Yesterday Lisa Costello and I drove home from Seattle. This after a very nice brunch with John Pitts, Melissa Shaw and her husband, and Greg Bear and Astrid Bear. We visited with another friend on our way out of town, then hit the road hard and fast for Portland.

was already home from the beach when we got back, so we collected her, made a fast turnaround, and hooked up with Jersey Girl in Portland to admire the new house she and Lisa are sharing, and go to dinner.

We headed for the Good Food Here cart pod on SE Belmont, but on arriving discovered that none of us had thought to bring enough cash. So we wound up at Dick's Kitchen where elk and buffalo burgers were had by all, along with kielbasa and oven fries with Cambodian garlic sauce. Nobody tried the water buffalo sausage, which I may go back for. (I've also had the dork burger there in the past, ground duck and ground pork mixed together, but that's an occasional special which wasn't on last night.) Good food and good company for four tired people.

Today I am back at the Day Jobbe where I will spend the next few weeks working on an exceptionally large project. Also, with the new, reduced chemotherapy in play, I am as of now back to being able to drive and have a social calendar. (Hooray!) Somehow the next month's worth of weekends have rapidly filled up. I'll even be making a few appearances at conventions and events, including (probably) Norwescon, as well as being Guest of Honor at Gaslight Gathering in San Diego in May.

Also in the department of fun stuff, I will be writing a chapter on steampunk for a forthcoming Writers Digest book on genre fiction. I'll be doing this after my current novella-in-progress (working title: "Pan, Human", though I may change it to "Hook Agonistes") is finished and before I dive back into Original Destiny, Manifest Sin.

So, yeah. Life goes on. Cancer giveth and cancer taketh away.