This is the last day of the Acts of Whimsy cancer fundraiser. It has made goal, but additional support is always welcome, especially given my new complications. Please check it out if you have not done so yet. And my thanks to the over 1,200 people who have contributed.

Why Even Radiologists Can Miss A Gorilla Hiding In Plain Sight — Wow… (Via Nate Lee.)

Due to changes in my cancer treatment protocols, I will be at Paradise Lost after all

Every Step You Take, Tracked Automatically — A new app called Moves logs walking, biking, and running—no extra effort required. It’s how self-tracking is meant to be.

Space Marines, Water War, and Uplifted Elephants — Howard Tayler Is Wise on MCA Hogarth, Games Workshop and the naming of things in fiction.

How to take a great author photo — Hahahah.

Computer program roots out ancestors of modern tongues — Automated reconstruction of long-extinct languages can test theories on how words evolve.

The best bar in the world that I know about — Another of Roger Ebert's gorgeous meditations on life.

How “Bullet Time” Will Revolutionise Exascale Computing — The famous Hollywood filming technique will change the way we access the huge computer simulations of the future, say computer scientists.

Landsat Data Continuity Mission Takes Off — I love the photo. The article is interesting, too.

An autochrome of a yellow dirigible in Paris, early 20th C. dirigible - Paris — (Thanks to .)

Chiune Sugihara: The Hero Who Didn’t Walk Away — Wow. Another story of the WWII era that I had never heard. (Via Slacktivist Fred Clark.)

A Call for Drastic Changes in Educating New Lawyers

Can the Pope Legally Resign? — Lowering the Bar weighs in.

On being white in a white white world. What’s a person to do? — A curious but encouraging post from Feminist Mormon Housewives.

Op-ed of the day: a depression sufferer begs, “Please take my gun away” — The Big Lie about guns is this: that they will keep you safe. But facts are facts, and actually, the opposite is true. Owning a gun will make you less safe. Ah, truth, of so little use to the conservative mind when cherished beliefs are challenged. (Snurched from Slacktivist Fred Clark.)

The Ignorance Caucus — Paul Krugman on the state of the GOP.

Can GOP end the ‘carnival of the crazy’? — In a word, no. The crazy is how they keep manufacturing more angry white men. Conservative politics is hooked on the crazy like a junkie on smack.

QotD?: Are you in a yellow taxi? 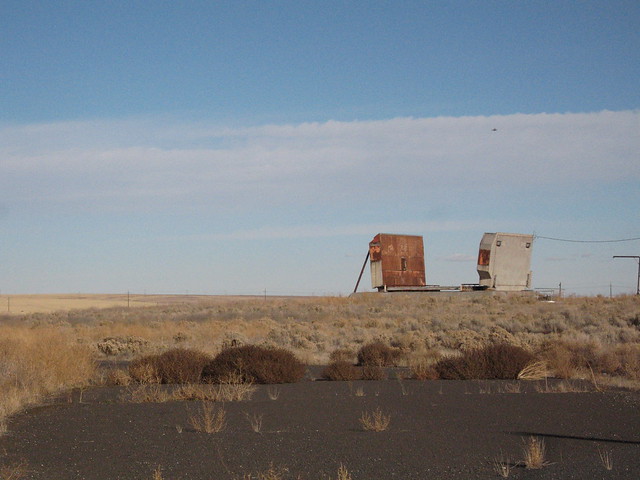 Yesterday was an interesting mail day. sent me a coprolite. 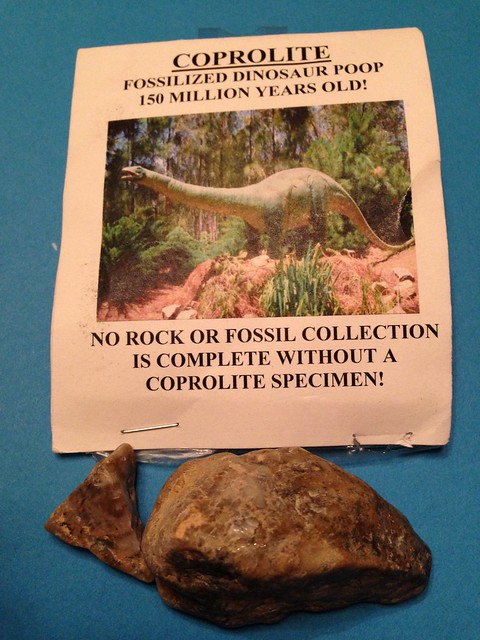 I think I've passed a few of these the course of my own chemo journey. And Elise rocks. (So to speak...)

At the same time, Tom Kaye, through the good offices of Amazing Stories, sent me some more coprolites. 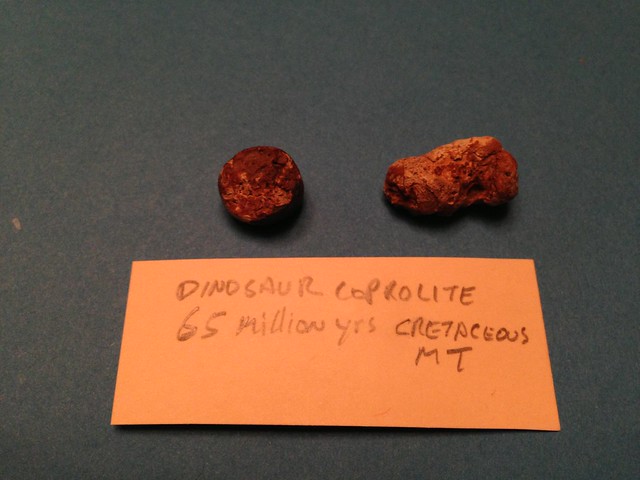 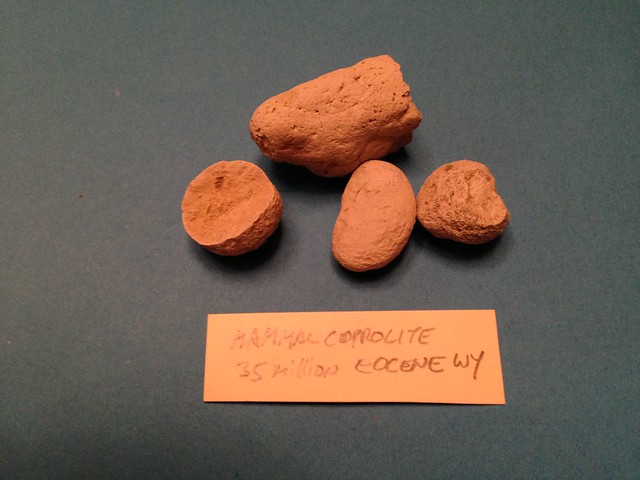 And since anything worth doing well is worth doing to wretched excess, Tom and Amazing Stories sent along a few bonus items. 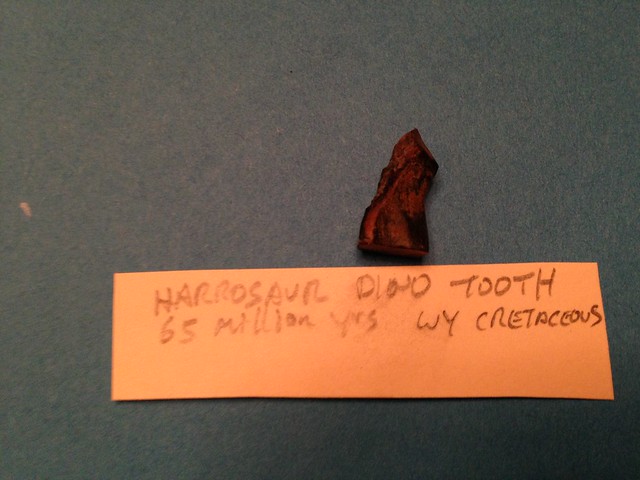 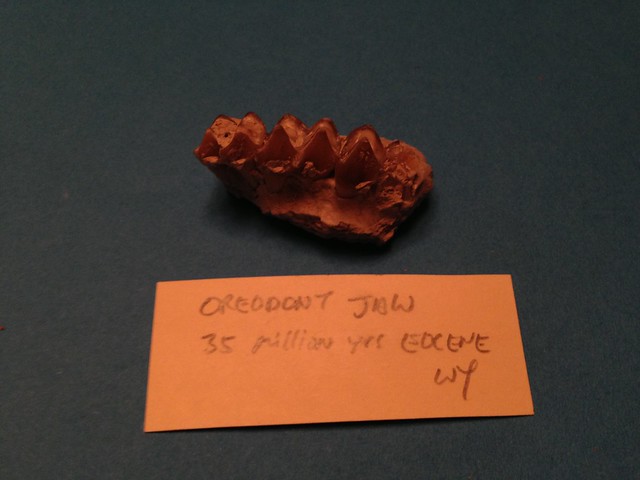 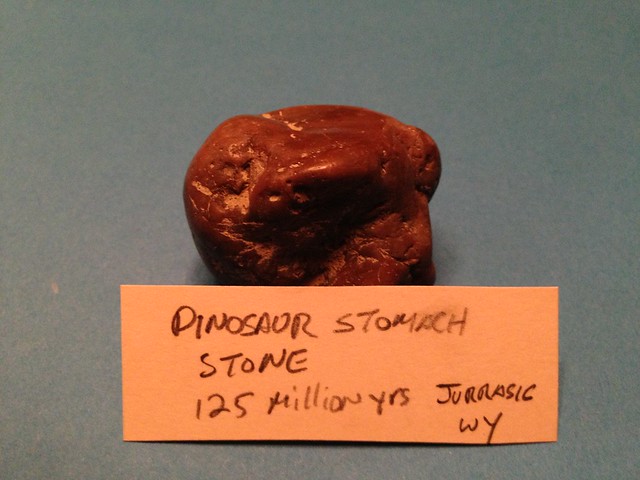 125 million year old dinosaur stone — I at first thought this was a bezoar, but I then realized it's probably a gizzard stone

So last night, we sat around and fooled with these objects which are acheingly old. And cool. And strange. Holding deep time in your hands is an amazing thing.

Because everyone with a severely disrupted lower GI tract needs stone poop to remind them of who and what they are. This is cool.

Thank you Elise, Tom and Amazing Stories. Thank you so much.

Yesterday, Dad and I had a conference call with the leading oncological geneticist at my home hospital system. We didn't learn much new, other than a recommendation for the RNA-SEQ we're currently trying to source, but we had a lot of things confirmed, which was good. They also commented that we were among the best prepared patients they'd ever spoken to. I asked if there was anything they would be doing if they were in my position, that I wasn't doing. The answer was basically, no. Keep moving, keep trying, explore all the options. So I suppose in the end that was a good thing.

The reduced chemotherapy prescription means I can start making plans again. This includes uncancelling my attendance at Paradise Lost and Norwescon. It also includes making or renewing social commitments which have been impossible for me under chemo. Even though the reasons for this aren't so swell, the re-opening of my options is fundamentally good for my spirit. So who knows? You might see me around soon.

More things in the mail

Another thing that came in the mail yesterday was this shirt: 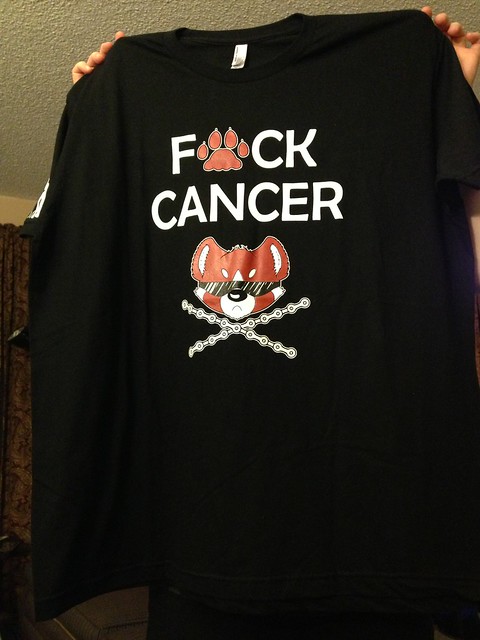 Courtesy of the delightful , who spotted it at Further Confusion and felt like I really needed to have it.

This is the last day of the Acts of Whimsy cancer fundraiser. The degree of support that I have received has astonished me, and beyond astonished me. You guys are awesome.

To speak for a moment about where the money is going, we've already spent $13,000 on the gene sequencing process, another $500 or so on miscellaneous medical expenses (co-pays and what not), and about another $9,500 is already budgeted for RNA sequencing ($7,000ish, no hard quote yet), as well as paying off my portion of the expense for last month's surgery ($2,500 out of pocket, plus some more co-pays). So you can see spending has already gone over the original $20,000 goal. There's a lot more to come, expense-wise. And I wouldn't be doing this if it wasn't for you.