Con or Bust is auction my Green trilogy, donated by me and Tor Books — Go make a bid!

I hate being disappointed by a promising book… — A reader reacts to Green. Not very much with the liking at all, I am afraid.

Calvin and Hobbes on writing for academia

Defence nerds strike back: A symposium on the Battle of Hoth — Hah!

A tale of two worlds: habitable, or colonizable? — Karl Schroeder is smart.

Cultural Diffusion and SETI — What happens to us if our SETI efforts pay off?

How Nest’s Control Freaks Reinvented the Thermostat — Two men who created the iPod and iPhone founded Nest and injected new technology into the humble thermostat. Now they have their sights on the rest of your house. I've been wanting one of these for a while, but not enough to do something about it.

Flirting 101: Coaches teach daters to cozy up — Maybe I need this?

Bits and Pieces — It is quite amazing how many parts of the body belonging to famous people in history, somehow become separated from the body itself and turn up again, many years or even centuries later. Let me give you some examples… Heh. (Snurched from art guru James Gurney.)

Tiny mutation may have shaped modern humans, scientists say — genetic variant could have helped people survive crippling heat by giving them extra sweat glands, says a report from a team that sought to replicate the effect in mice.

Hints of cosmic ray-climate link in sediment core from Japan — But the correlation only holds during some of the times examined. Weird.

Geocentrism and a historical Adam — Slacktivist Fred Clark on the idiocy of some Christianist doctrine. And yes, geocentrism was once Church doctrine as well.

Wrapping up the ‘Biblical Family of the Day’ series — The gatekeepers indignantly claim that every word in the Bible is, by definition, completely moral. That doesn’t reveal a reverent devotion for the Bible, but rather an ignorant disdain for it.

How to Think About Guns: A New Freakonomics Radio Podcast

Fox Claims That Declining Minimum Wage Is "Growing Exponentially" — Which happens to be flatly untrue. But since the facts as usual don't fit the conservative narrative, Fox as usual outright lies. Millions of Republicans nod along.

Senate Republicans Make a Spectacle of Themselves — Except for dedicated partisans, no one can look at the display most Senate Republicans have put on over the last eight weeks and conclude that these people should be in the majority.

QotD?: Have you been around for a long, long year? 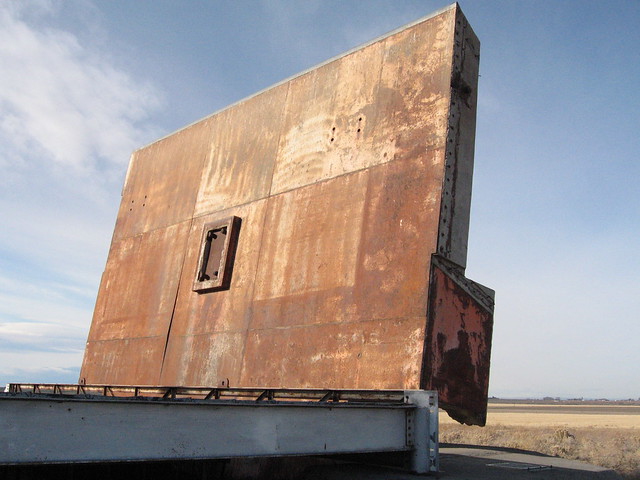 Meeting with my primary care provider

I was recently exchanging emails with my primary care provider. I'd asked them if I should come in for my more-or-less annual cholesterol screening now, while I'm in the relatively healthy trough between chemo series. They replied that it wasn't worth doing, as monitoring my cholesterol levels would neither improve my quality of life nor extend it.

I really had to think about that one. Just another affirmation that while I have not yet been given a terminal diagnosis, I am on a terminal path. We're no longer worrying about my long-term heart health.

My primary care provider also suggested I come see them to talk about palliative care and hospice. Their point was while I certainly didn't need that now, it would be better to understand my options and plan ahead than try to deal with this in the moment of maximum stress. As this has been my general view of forward planning for late life, end-of-life and post-mortem issues, I agreed. We're meeting near the end of the month.

That will be a sobering consultation.

This is my reality now, planning for the manner of my death. Not the overwhelming reality, or even a majority of it, but still a hard nugget at the center of my world.

The genomic sequencing has been done, and we're now wrangling with the lab about how many copies of the data to release. They are grudgingly agreeing to produce a second copy, at my cost, and are flatly refusing to produce more. Which seems sort of strange, and extremely patient-unfriendly. The issue from my perspective is that the data comes encrypted on a high-capacity hard drive. It's not clear to me that I'll be able to make copies myself, depending on the nature and degree of the encryption.

I may be putting out a call for some help from a white hat hacker soon, on this one. Ideally someone in the Portland area, so I don't have to keep mailing this thing around, once I have received it.

At any rate, the data now exists. Our next step is to get it off to the analysis group.

I continue to cope in various ways. (See below.) Mostly I'm keeping it together pretty well. This has surprised my therapist, considerably I think. If my family and friends are likewise surprised, they have kept it to themselves. But who has time to melt down, or slip into a black depression? Either of which would be reasonable responses to the unreasonable stresses in my life. But life is too short. Figuratively and literally.

Sunday we are having an archive party at my house. We will be boxing up and prepping for shipment everything that needs to be sent to Lynne Thomas the Northern Illinois University Special Collections. There will also be cookery, as Jersey Girl in Portland has threatened a bacon explosion. Meanwhile, Lisa Costello and I stumbled upon Benesse whilst out and about yesterday, and came home with several high end flavored olive oils to go with the bread and cheese I will be providing that day. So a small, artery-clogging feast will accompany our labors on the part of literary posterity.

Speaking of coping, I got three new tattoos yesterday. The work was done by Spike Palmer at Sea Tramp Tattoo in SE Portland. 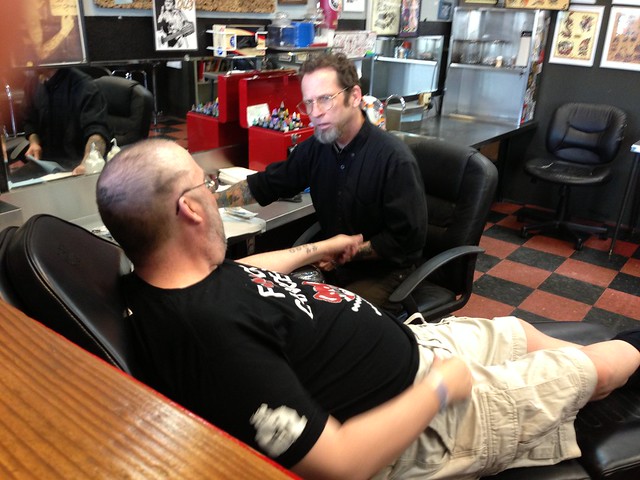 Me and Spike, setting up 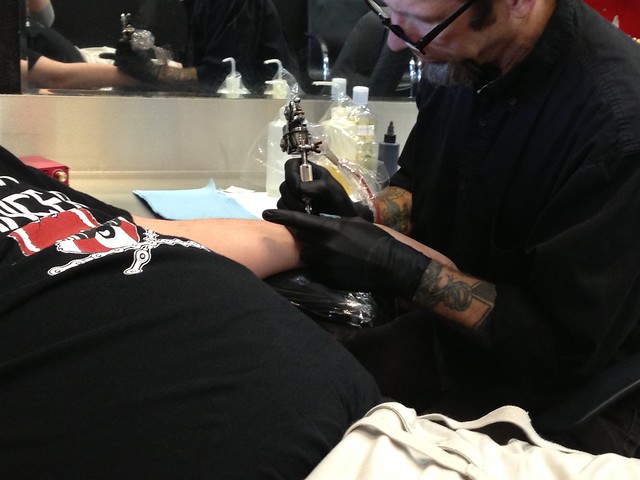 The man at work 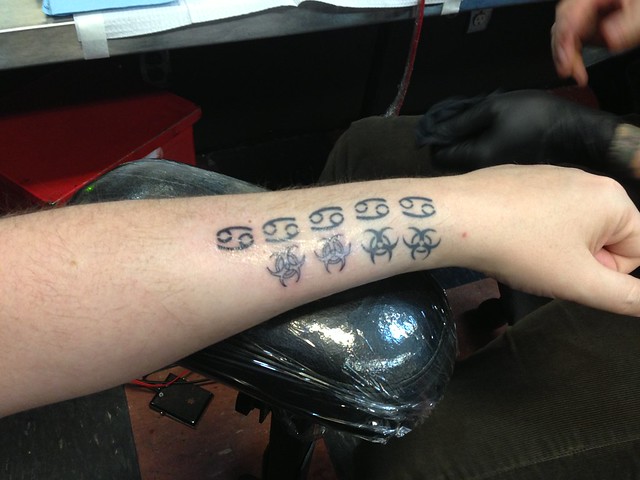 We're also discussing the possibility of a modest tattoo on my upper left chest marking my status as a permanent cancer patient. I didn't want to deal with it all at once, though. Ah, pain. (Though to be honest, I would describe tattooing as extreme discomfort rather than actual pain.)

Making a spectacle of my death

My dear friend John Pitts recently described me as making a spectacle of my death. I was mildly offended by this at first, but then I realized he meant this in a literal sense, almost a Roman sense, rather than in the contemporary pejorative use of that phrase. And he's right. I've been public about this cancer since the second day, even before we knew it was cancer. Five years later, I have lived out this disease and its discontents in a very public forum. I can do no less with the process of my death and dying.

I do it because it helps. It helps me cope, to spell things out clearly, to try to wipe away the fears and assumptions in cold, objective words. It helps others, demonstrably so from the mail I receive on a far too regular basis. It demystifies the processes of cancer just a little more, for those who come across my blogging. And I have to believe I'm making the world a little bit better place for this.

As I said to John, one of my great gifts is story telling. If I can't tell the story of this cancer, who can? It's perhaps even the case that my entire fiction career was little more than preparation for my career as a cancer patient and cancer blogger.

I can't say for sure about any of that. What I can say is that I embrace John's comment. Yes, this is spectacle. Whether you are amused, edified or horrified, if you are reading this, you are participating. I've stripped away the confining veils of privacy and common decency in favor of as much honesty as I can muster. And so many of you have paid me back in kind, as well as paying it forward.

Thank you for coming along this far. I hope you can follow the rest of the journey without too much heartbreak, and I hope this story makes everyone's process a little easier when they or their loved ones approach this dark door I am on the step of.