Helium-burning binary stars give us a new tape measure for the Universe — Gives the distance to the nearest galaxy with 1/3 the uncertainty.

Return of the Neanderthals — Should scientists seek to clone our ancient hominid cousins?

Good Reason to Kill #30: Wouldn't Honor Your Dollar-Off Coupon — This is why we need more guns. Don't you feel safer knowing that people with the discerning judgment of this woman have the right to keep and bear arms?

Study: States with more gun laws have less gun violence — New study finds that tougher laws on guns can have an effect on homicide and suicide rates. Also, this just in: water is wet, sky is blue. Unless you're part of the gun culture, of course.

Gun advocates split with NRA on background checks — Let us hope that the NRA, one of the deadliest organizations in American history, blusters itself into irrelevance.

The Nonsense of Austerity — A despatch from the reality-based world. 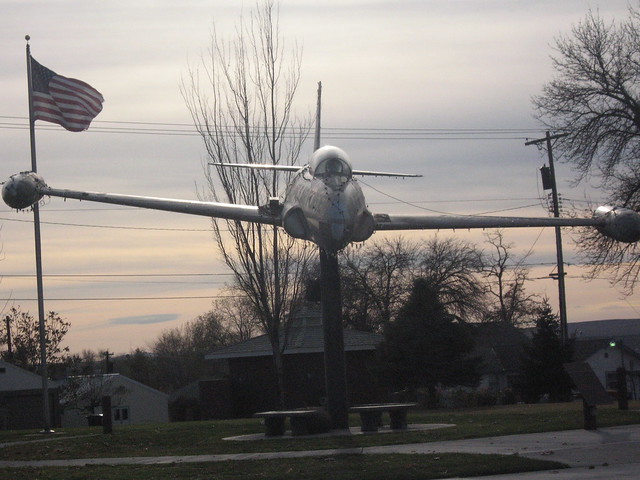 We had ten people last night, including myself and Lisa Costello, at Dimassi's Mediterranean Buffet in Houston. (Dad wasn't feeling well, and so did not join us.) That was a heck of a lot of fun, and the food was pretty good. 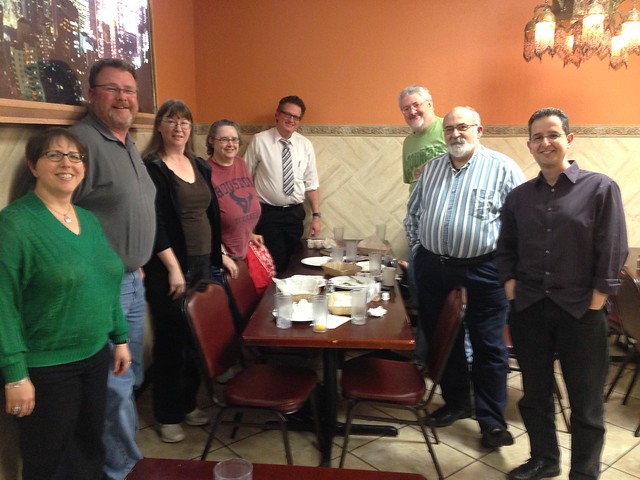 We had a lot of fun, talking about writing, cars, cancer, life and so forth. Some funny stories are told. Some delicious food was eaten. A minor emergency or two was solved with dispatch.

Thank you everyone for turning out.

Yesterday, Dad, Lisa Costello and I had the opportunity to meet with Rich Mazzarella, Ph.D., the Chief Computational Biologist for Appistry, the company that is doing the clinical analysis of my genome sequencing. That was a fascinating ninety minutes. There was no particular agenda to the meeting, though Dad and I had prepared a few questions which were eventually covered in the process of the discussion.

Rich discussed my personal DNA sequencing and Appistry's analysis of it, including reference to some issues they had loading the data. We reviewed the value of RNA sequencing, what we can expect to see from it, and how we might accomplish that. Rich promised to call a colleague at one of the few labs doing RNA sequencing to seek a possible second source for that procedure since our primary source is requiring a multi month Institutional Review Board (IRB) process before they can proceed. He also talked quite a bit about the DNA and RNA sequencing process, how it's being used now and where it's going clinically. This strayed into some overview of animal genomics and how human and animal genomics work.

In addition to that, we discussed some elements of my diagnosis, treatment plans and the conversation with the oncologist here at M.D. Anderson in Houston. Rich offered some specific opinions on some of the outcomes there.

Rich said that the data they'd received from the sequencing lab presented some problems at loading. He didn't believe that the sequencing process was bad, but he felt they'd made some odd choices encoding the data and with their choice of software and protocol for the first-tier analysis. Appistry backed out of that analysis to the raw data and re-encoded with a different software package more to their liking. There is currently a problem with the end portion of genome, which reflects a much larger base pair count than expected. Rich believes this is likely a trivial artifact of data processing, and plans to review my files in the next few days. He feels it may be two to three weeks before a final report is available, but he can provide an interim report sometime next week.

What we can expect to see in the report is a summary of overly activated gene complexes which may have clinical significance for me and my cancer. To that end, we also talked about the process of cross-referencing those identified gene complexes with pharmaceutical databases that list drug-gene interactions and provide suggestions for drugs targeting the identified gene complexes. Rich mentioned that Appistry will shortly have access to a database at M.D. Anderson which he feels is superior to their current data sources. This is one reason for the delay in getting us a final report on the gene sequencing; he wants to use that database to run the cross-reference.

The Value of DNA and RNA Sequencing, and What We Can Expect From It

We talked about the value of the sequencing process, especially in light of an observation made by my M.D. Anderson oncologist that the science was too far in advance of clinical practice to be useful. Rich clearly didn't agree with that, though he conceded that this was an issue. Up until this point, and for the next few years, DNA and RNA sequencing are going to be personal medicine. There aren't yet best practices or regulatory guidelines for how apply these technologies, and many doctors are either resistant to or indifferent because of this. In my experience thus far, the team at at my home hospital is interested in learning more from this process, and applying whatever we can learn to my clinical benefit.

Rich indicated that identifying the active gene complexes via DNA sequencing was only half the battle. He felt that RNA sequencing was if anything perhaps more important, as that will indicate which genetic instructions are being most widely executed at the cellular level. This in turn would point to the most likely treatment targets. The challenge is that RNA sequencing resources are even more scarce than DNA sequencing resources. We have a request into a major university with which Appistry has affiliations for RNA sequencing, which they are willing to do, but right now that request is pending a multi-month IRB process. This is another area where the lack of consistent regulatory guidance and the absence of best practices causes problems. Rich knows a scientist at another institution who may be able to do the work for us on a faster turnaround basis, and will be following up.

He confirmed my feeling that fundamentally we are still shooting in the dark here. Rich's point was that if we do reveal treatment targets through DNA or RNA sequencing, we can have a much higher degree of confidence that those treatments will be effective. Instead of working from statistical medicine as oncology normally does (i.e., out of every 100 patients with my cancer history, X% will respond to treatment A, while Y% will respond to treatment B, etc.), we are aiming for personalized medicine based on my precise genetic factors (the DNA sequencing) and a close look at what's actually going on inside me at the cellular level (the RNA sequencing).

The DNA and RNA Sequencing Process, Including Use Notes and Comments on Animal and Human Genomics

We talked about the current state of play in DNA and RNA sequencing. Rich has been working in this field since the early 1990s, including about 10 years with the Human Genome Project. The throughput on these processes is still very minimal, vastly below the levels required to be clinically useful. Even now, with the current generation of sequencing equipment and analysis software, it can take multiple calendar weeks and many person-days and computing-hours of effort to process one DNA sequencing from start to finish.

Essentially, this is still a boutique or craft service with no commercial availability yet. The effort around me is near the leading edge of the science and well beyond the leading edge of clinical practice. Even on a case-by-case basis, it can be difficult to get work done, especially work with clinical applications.

We talked about the variation in human genomes. This amounts to rather less than 1% of the total human genome. We share 60% or more of our genome with mice, for example (and presumably other mammals). Rich discussed the value of conservation in genetics, and copy density, specifically how a high copy density (i.e., number of repetitions of a gene within a total genome) can reflect both the importance of that gene through redundancy and the opportunities for evolutionary change through plasticity. One of the things they look for in the DNA sequencing is that copy density, as cancer (as well as other disease) can switch off or delete gene copies that might be effective in fighting them -- this is called reduction in heterozygosity.

My Diagnosis and Treatment Plans

Rich agreed with the M.D. Anderson oncologist's negative view of prescribing Vectibix for me at this time, given my recent metastatic history. Also, after reviewing my genetic test report from my home hospital, he questioned the use of EFGR inhibitors against a tumor with an EFGR resistant mutation. I told him I'd asked this same question and been told that the evidence of EFGR resistance was literally a handful of cases, and wasn't considered statistically significant.

He also looked up the drugs cited in the experimental study I've been referred to here at M.D. Anderson. Rich did not feel they'd be particularly effective for me, and considered going forward with the Regorafenib to be the best option by far for now, pending new ideas emerging from the DNA sequencing and analysis or the proposed RNA sequencing and analysis.

Rich emphasized the value of multidrug treatments with respect to cancer treatment. This has to do with the mutation rate in response to selection pressure from the drugs being administered. A single drug treatment requires only a small mutation for the cancer to become resistant. A multidrug treatment requires two, independent mutations, which squares the odds in my favor. This suggests to me that even if we do go forward on Regorafenib, we should consider a second drug at the same time.

Dad asked about the citation of Celebrex as an off-label cancer fighting drug due to its role as a COX-2 inhibitor. Rich pointed out that if I were taking daily aspirin (which I am), I was already taking a COX-2 inhibitor, so the role of Celebrex for me would be relatively minimal. I want to discuss this with my medical oncologist at my home hospital, however. I do know they are supportive of the sequencing information and potential new directions in prescribing. Rich felt like I really needed an oncologist who was a Ph.D./M.D. with some specific expertise in this area.

We learned a few other things. For one, Appistry writes the software that manages all of FedEx's air express dispatching. Dad asked how they had gotten from there into genomics. Rich said that from an IT point of view, it was all Big Data. We talked about how the Appistry server arrays were configured to be highly fault-tolerant without central controllers to provide a single point of failure, and how analysis of sequencing data was parceled out among those servers.

I wouldn't have been having this conversation yesterday if not for the Acts of Whimsy fundraiser; all the hard work by Mary Robinette Kowal, Catherine Shaffer, and so many others who contributed their time and effort; and most especially the generosity and support of all of you who supported this process.

You guys brought me to this meeting, and to the testing and clinical effort behind it. If we find a path forward to extend my life or possibly cure me, it will be because of you.

Meanwhile, today, I take my leave of Texas once again and fly back to Oregon. Lots to think about.