Where Things Stand — Nearly 90% of the books reviewed by The New York Times are written by white writers. That is not even remotely reflective of the racial makeup of this country, where 72% of the population, according to the 2010 census, is white. We know that far more than 81 books were published by writers of color in 2011. You don’t really need other datasets to see this rather glaring imbalance. (Snurched from .)

Dork Tower on tweeting and writing novels — Hahahah. (Via .)

Toward a Space-Based Civilization

Electronic Sensors Printed Directly on the Skin — New electronic tattoos could help monitor health during normal daily activities. I can think of some pretty cool nonmedical uses for this, too.

Sequencing the Underdogs — Transcriptome studies reveal new insights about unusual animals whose genomes have not been sequenced.

Failure to Hunt Rabbits Part of Neanderthals' Demise? — The inability to shift prey may have been deadly, study says.

Japan Erects Massive Sculpture of the Last Standing Tree from a Forest Destroyed by the 2011 Tsunami — (Via .)

Why the world is so angry with Christians — It’s ludicrous, really, the way some Believers carry on in this nation about being persecuted. You know the type. They can be heard most often on talk radio or some cable television channel whining about how their religious freedoms are being infringed upon. (Via Slacktivist Fred Clark.)

Calgary Cruz sure is lucky he wasn't born in Hawaii — Anyone with the foggiest awareness of the facts understands that there's nothing controversial about Cruz's status. He's just really damn lucky that he was born in Canada instead of someplace overseas, like Hawaii, because then we'd have some investigating to do.

The GOP’s Bush Baggage — Bush did everything that fever-swamp conservatives like to accuse Obama of, and far worse. Why would anyone vote Republican after that disastrous presidency?

QotD?: Did you lose yourself in a familiar song?

3/12/2013
Writing time yesterday: 0.0 hours (took the day off)
Hours slept: 7.25 hours (solid)
Body movement: 0.0 hours (21 degrees and snowing outside, what do you think?)
Weight: n/a (away from home)
Number of FEMA troops on my block escorting ACORN thugs to steal the votes of "Real Americans": 0
Currently reading: Reaper Man by Terry Pratchett 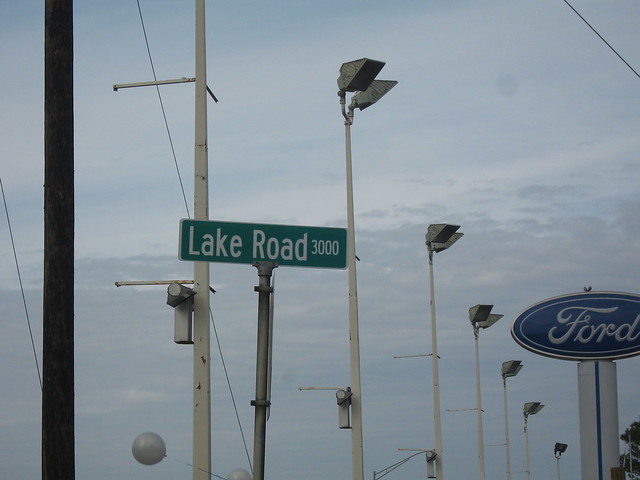 While we were in Austin, Donnie Reynolds took Dad, Lisa Costello and me to the Foundations in Austin, Texas. [ Google Maps ]

I remember this abandoned condo complex project from when I lived there, but at the time it was just a concrete maze on the side of a hill. Now, though, it is a graffiti park. 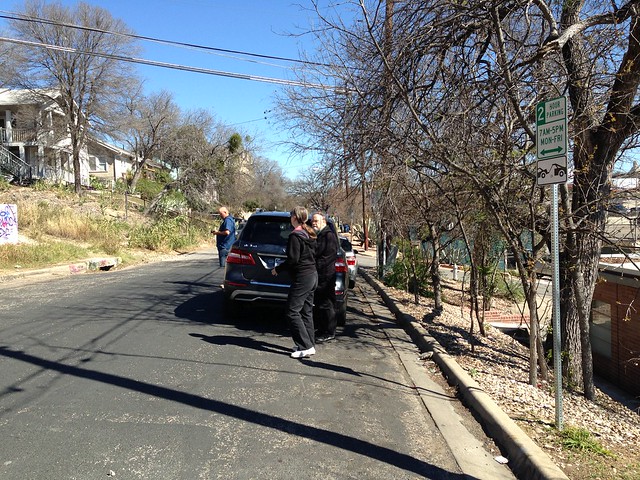 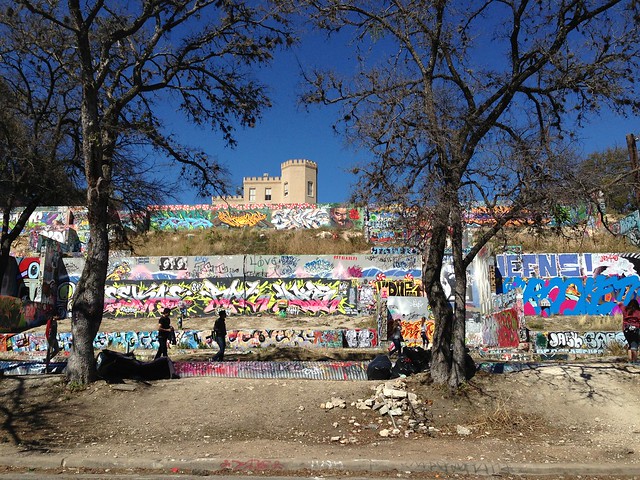 The view from Baylor Street, with the old Texas Military Institute castle rising behind it 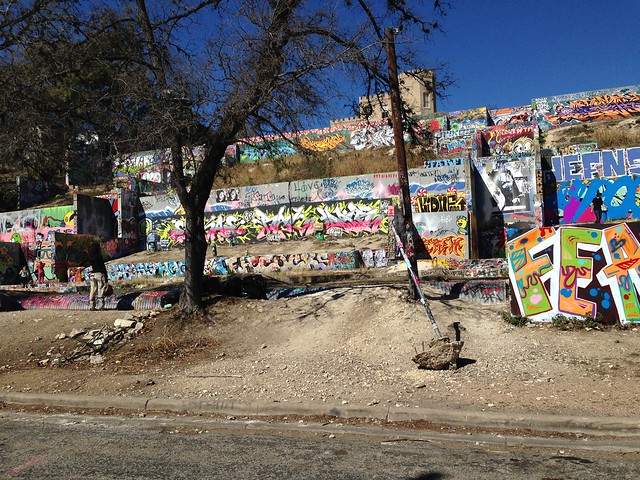 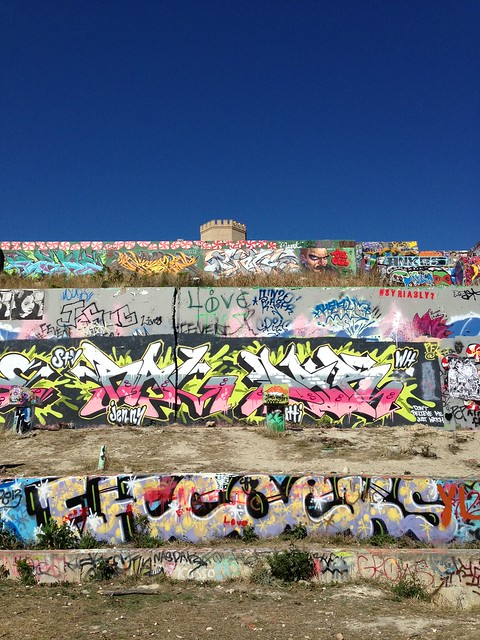 The castle rising above the walls like a post-apocalyptic fortress 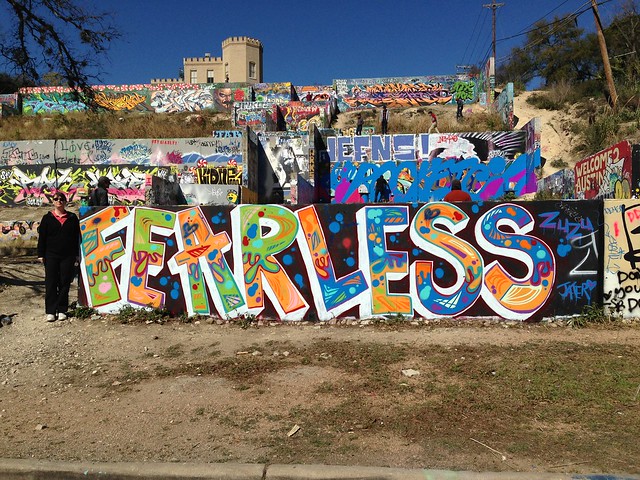 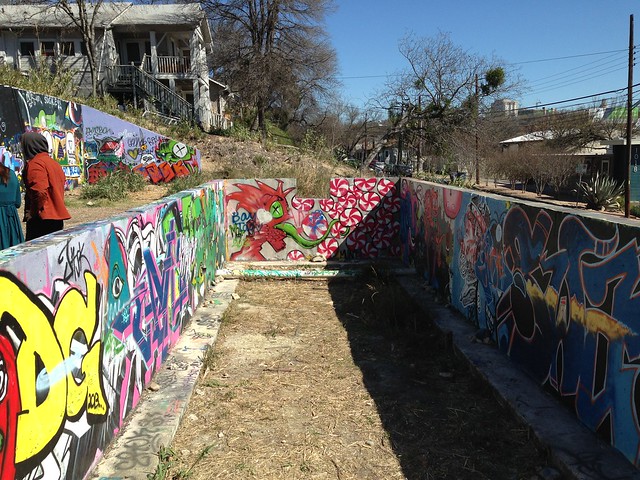 One of the foundation pits 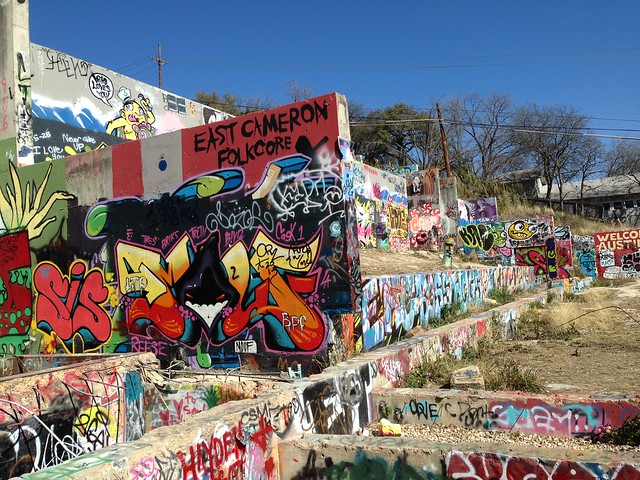 An off-angle view of the walls and pits 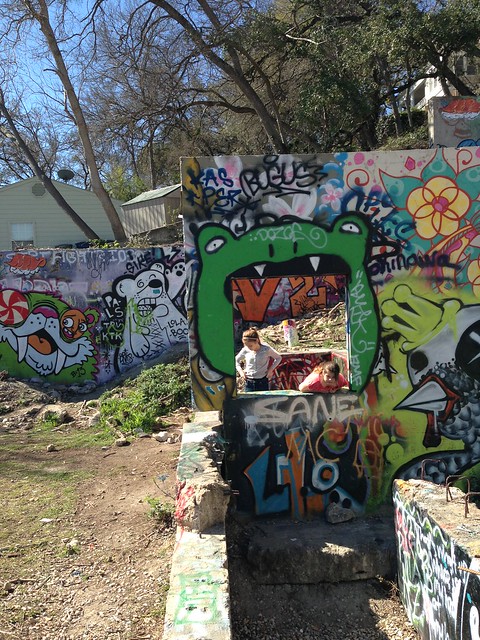 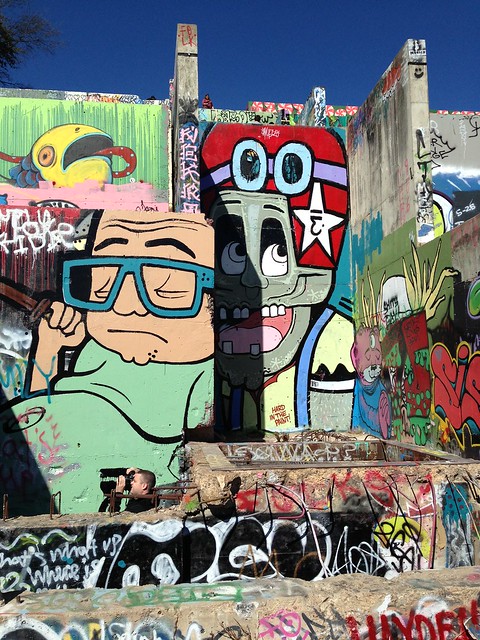 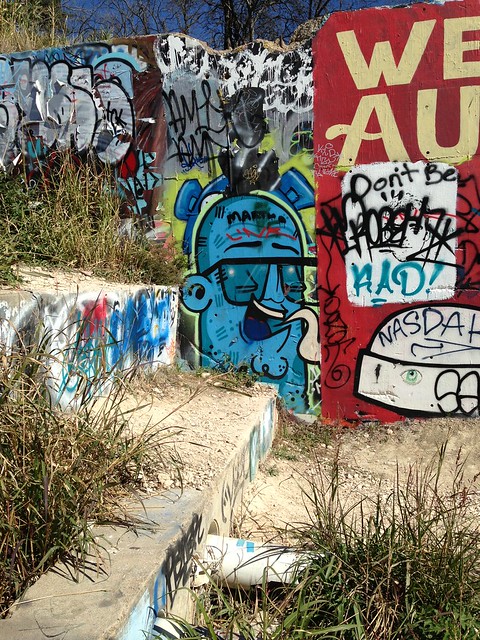 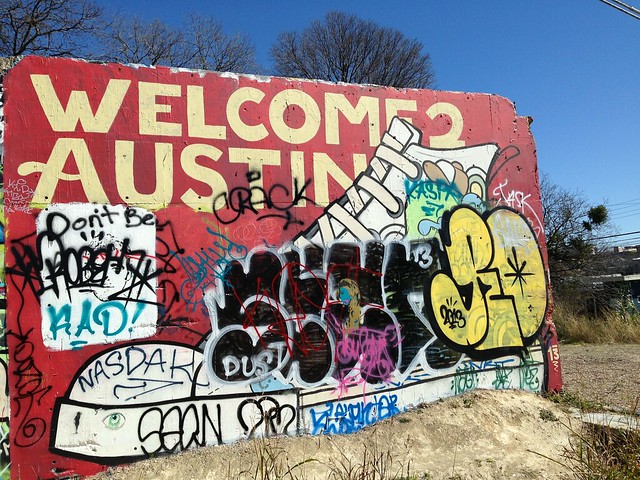 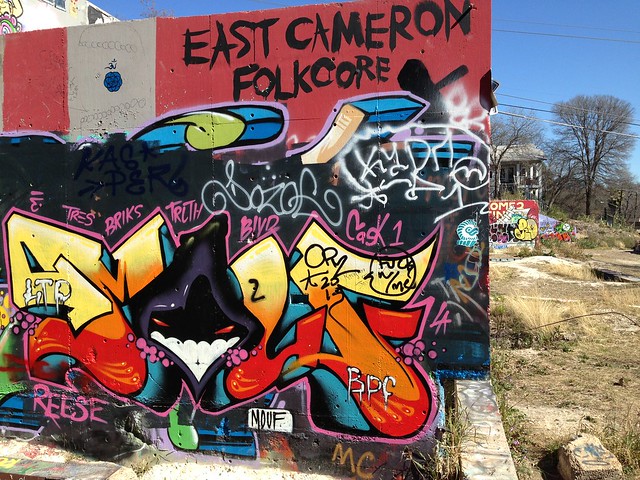 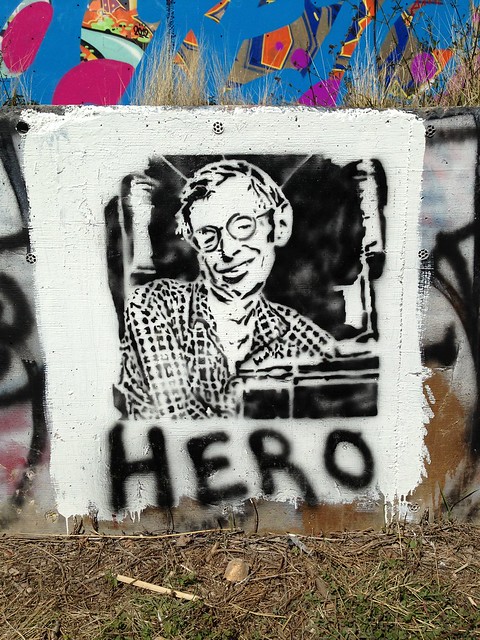 First, if you have a minute, go watch the new trailer for the Lakeside documentary. It does a pretty good job of capturing where I am right now.

I've been feeling my mortality again lately quite a bit. The recent trip to Austin, being in Omaha now by myself: lots of food for thought. Just settling in to the new reality, really. Not so different from the old reality, just a little worse. My oncologists have redefined hope from "finding a cure to return you to a normal life" to "finding ways to keep you going as long as we can." Well, okay then.

I hadn't really been expecting to be in this place at 48 years of age.

John DeNardo made a comment to me the other night at dinner about how much strength it must take for me to face this cancer and carry on. But it's not strength. It's just daily living.

I've been doing this for five years come April. In retrospect, the first year was easy. I spent most of it thinking I'd dodged the bullet. That's what I was told, after all. Then there was the lung metastasis, almost exactly a year after the initial presentation. My lung was surgically resected, I did a tour of duty in chemo hell, and we thought again I'd be fine. Then it was my liver. Then it was my liver again. Then it was my liver a third time.

It's not like I just woke up one day and found myself living in a cheap horror show. This is a very expensive horror show, constructed bit by bit over an extended period of time by my own body, its genetics gone awry and descending into the errant metabolic process that we label as cancer. I've been on a glide path into the valley of the shadow of death for years.

When I seem brave? That's mostly a combination of routinization, inevitability and psychic numbness. When I seem competent? That's just me doing what I must believe any rational person would do in my situation: gather the data, seek to understand the interpretations, and work at making the best decisions possible.

I want to live. What else could I do?

I'm probably going to die of this, probably in the next couple of years. That doesn't make me want to live any less. Quite the contrary. I'm neither particularly brave nor particularly competent. I'm just a guy with cancer who sometimes cries for fear of his life and the existential terror at the bottom of his soul. Then gets up the next day and does the best he can. Surrounded by a world full of good, loving people who do the best they can.

When you think about it, there's not a lot more to life than that.