Jay’s Genome Project — Astrid Bear takes the wrappers off something cool in progress.

Erosion — Scrivener's Error with a much less than rosy view of the Random House ebook contracts issue and its resolution.

Floorplans of the homes of television characters — (Snurched indirectly from Found in Mom's Basement.)

Ancient Egyptian Cemetery Holds Proof of Hard Labor — Heretic Pharaoh Akhenaten's capital was no paradise for many adults and children.

This is What Happens When You Run Water Through a 24hz Sine Wave — Oh, wow. Brings a whole new meaning to "don't cross the streams". (Thanks to .)

Life Under a Tiny, Red, Angry Sun — Reminds me of my first marriage.

QotD?: How far can you walk? 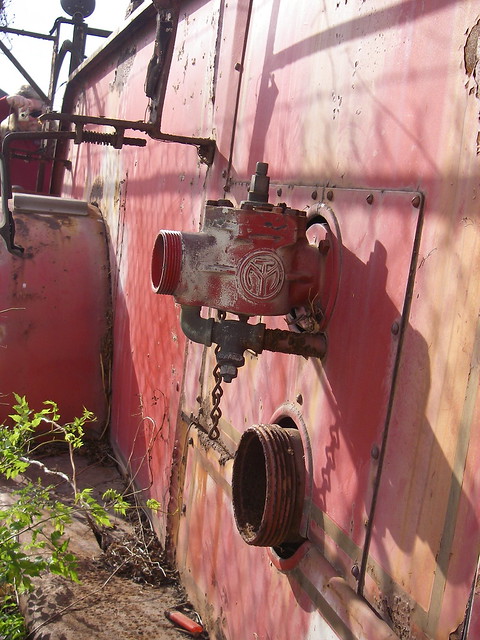 I'm still adjusting to my deepening sense of foreshortened mortality. Doors keep closing on my future, and I'm trying to live in the moment. In Omaha right now for work, which used to be a (nearly) monthly occurrence, but now happens far less frequently. I'm off to ICFA next week, along with some other event and personal travel plans in the next couple of months, because quite frankly I'm trying to cram in not just a year's worth of living, but probably the rest of my life's worth, into what will likely be a very narrow window.

At the same time, things happen at home. On this blog I rarely discuss the issues faced by people around me, and even then only with their permission. It's not for me to breach other people's boundaries of privacy and confidentiality. Suffice to say that in my circle of family and friends my own cancer journey has brought not just the obvious severe distress, pain and sorrow, but more serious issues including emotional breakdown and even hospitalization for stress-induced illness.

Yesterday afternoon there was a major eruption back in Portland. So serious that I looked into changing my flight home, but that was profoundly cost prohibitive. People are angry, bitter, and very sad; and some extremely expensive things happened which I shall have to pay for out of pocket. At this end in Omaha, I was on the telephone for over three hours dealing with what I could. Friends and family in Portland were far more deeply involved in dealing with things directly.

As a result I did not get any further writing done last night.

As a result I went to bed late and am short slept.

As a result I am probably going to have to cancel my weekend plans back at home.

As a result I am strongly considering canceling my trip to Florida next week.

It's not enough that cancer has to ravage my own life, stealing both my long-term hopes and short-term freedoms. Cancer also fractures and distorts the people who love me. Their pain and anger then flows back into my life, where I have to deal with the consequences of that. I lose on both the first-order effects and the second-order effects.

I know this is not all about me. Other people's distress is genuine and real and needs to be addressed. But God damn it, I feel like I cannot catch a break. Even this narrow slice of time where I can travel and do the things I used to do in my everyday life is compromised.

Cancer: it's why I cannot have nice things.

P.S. — I apologize for talking around the issues. I know this style is classic passive-aggressive Internet drama bait. But some stories really, truly are not mine to tell, and it's hard to talk about my part in them without breaching that confidence. It's equally hard not to talk about them at all.

And yes, everyone involved will be all right.