A statement from Chaz Ebert — Sigh.

Talia's Life: Coping with Cancer! — A 12 year old describes living with cancer. (Via .)

Thousands of Medicare patients just lost chemotherapy because of sequester — Thank you, GOP. Your compassionate conservatism underwhelms. Fatally, for some. Are you proud of your Republican party?

Target apologizes for label on plus-size dress — Shoppers at a Target store in Brooklyn say a label that listed the color of a plus-size dress as "manatee gray" was insulting. The label for the same dress in smaller sizes described it as "dark heather gray."

Police Surveillance May Earn Money for City — Interesting, and a bit frightening. (Via my Dad.)

Brazil Nut Effect Measured in Lunar and Martian Gravity Conditions — I think this is my favorite headline of the week.

The 25 Best Photobombs of All Time in the Universe Ever — Snerk.

Bitcoin May Be the Global Economy's Last Safe Haven — Really?

Western U.S. Created From Geologic 'Pileup' Says New Study — Warning, facts about the majesty of the universe are not valid for Young Earth Creationists and others among the willfully ignorant.

In Sign of Warming, 1,600 Years of Ice in Andes Melted in 25 Years — Glacial ice in the Peruvian Andes that took at least 1,600 years to form has melted in just 25 years, scientists reported Thursday, the latest indication that the recent spike in global temperatures has thrown the natural world out of balance. Amazing, the lengths liberals will go to in order to perpetrate their climate change hoax.

Climate change may be irreversible, but we control the future trajectory — Or not. We all know reality doesn't stand a chance when confronted with good, patriotic, "real American" conservative ideas.

Why expanding background checks would, in fact, reduce gun crime — Oops. Once again that pesky reality contradicts the conservative narrative. As always.

Congress Obsessed with American Muslims, Neglects real threat of White Supremacists — This has been true for years, like when the GOP suppressed the DHS report on the threat of conservative domestic terrorism. Confidential to Republicans: It's hard to think rationally about policy when your entire political fortune is built on lies and fear.

The Conservative Black Hope — For kids like me who came up in Baltimore during the '80s and '90s, Dr. Benjamin Carson has special importance. Ta-Nehisi Coates on Ben Carson. Though he doesn't use this phrase, I would characterize what he is describing as cynical political opportunism.

QotD?: Ever been to a joint in Bakersfield called the Wagon Wheel? 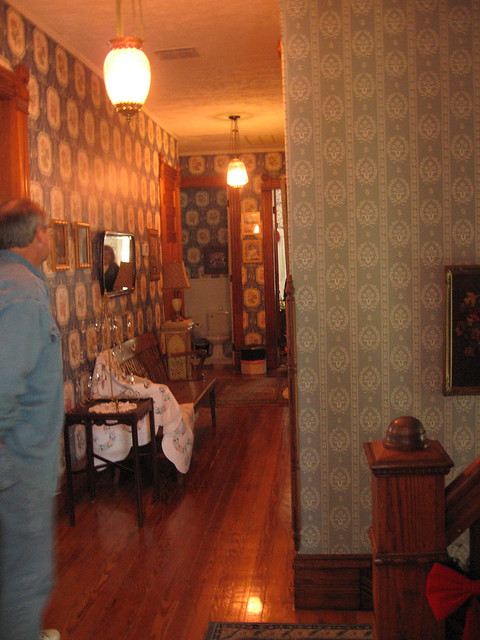 Front hallway in the house of my late grandparents Lake, now a B&B in Gainesville, TX. My grandfather kept an old caboose lamp hanging from that ceiling, and had an office under the stairs. The grandfather clock now in my house sat on the first landing of those stairs. Photo © 2007, 2013, Joseph E. Lake, Jr.

This is an online reprint of a story of mine which appeared ten years ago in The Third Alternative. I've been listening lately to the song which inspired it, Camper Van Beethoven's "Jack Ruby".


All Our Heroes Are Bastards


My cousin Victor and I stood in the night's hot rain, wondering if my sister would come back from the dead. The paramedics had departed, leaving nothing behind of Marisol but a spreading stain on the pavement and the tangy reek of blood. The cops holstered their guns and followed the ambulance; it was more valuable than my sister had been. We watched them go, red-and-blue party lights flickering like spastic stars among east Austin's old limestone buildings, making colored jewels of the rain.

"Drybacks," I said. The word itself tasted like dust.

Four of them had killed her, a Dryback Roll. It was one way they recruited. The cops had shrugged it off, written it up as an accidental death — Marisol hadn't been important enough to go rattle cages over, and Drybacks were big stuff these days. I spat, liquid from my mouth as proof-of-life. "Fucking muertados."

"Caballo," Victor said, laying a hand on my arm. "Show a little respect. Marisol is one of them now. Your sister, man."

When we'd been little kids, I was Horse and Victor was Bull — together we'd throw off the vaqueros and run free in the crisp-grassed, prairied hills east of town. Then the Drybacks crossed over, rising from their graves, and we grew up — pronto.

I sighed. "Toro, they killed her. And if she comes back, she'll be one of them. She's not my sister no more."

He shifted, a knife fighter waiting for the right time to pop the blade. "You got that look, man, like you're going to do something."

"What's to do? We can't kill the dead." I stared at Marisol's blood until the hot rain washed the reek away.

It's a damned complex book. I mean, I knew this all along, but I know it all over again.

So yesterday I drew up a Dramatis Personae. Named characters. Significant unnamed characters. (The killer angels, for instance, do not have names at this point, though they have distinct personalities and important roles in the story.) Named animals, mostly horses, oxen and dogs. (This is the Old West, after all.) Named places that are ahistorical. Named steam rams. And identifying the story year(s) in which each of these occurs, because the narrative spirals through the first 70 years of the nineteenth century, wandering across both space and time as the story unfolds.

I was laughing at myself for naming horses that don't even appear on the page, for example, while leaving all sorts of people referred to only by their presence in a crowd or their profession. It feels right, but it also feels complicated. I expect that by the end of the weekend I'll have begun laying down new words, but I need a very good handle on this indeed for this book to come together anything like my vision of it.

This is the most fun part of writing for me. Primary creation.

Just for fun, here's the named animals so far. One of them is an actual historical character (so to speak). I will leave it as an exercise for the reader to decide which names belong to horses, oxen and dogs, respectively. In some cases, it should be obvious.


I am having a very good time with this.
Collapse