The Author Exploitation Business — A commentary on Penguin and Author Solutions. Penguin has been looking under the Author Solutions hood for 10 months now. Its conclusion was this: we can make this bigger. We can take this scam on the road and start exploiting writers all over the planet.

The Kitten Setting: An Experiment — On trollery, pace John Scalzi.

San Diego-Tijuana Region — A satellite photo from NASA's Earth Observatory site. Mildly ironic, because I woke up this morning in San Diego. I think I can see myself waving from my hotel window.

Telomeres Affect Gene Expression — As telomeres shorten with age, genes as far as 1,000 kilobases away could be affected, including one responsible for an inherited muscle disease.

Why gamma-ray burst shocked scientists — I believe that Dr. Bruce Banner is on the case.

Mars Expedition Possible in 20 Years — Do you really want to go to heaven?

Gearing up to search for gravity waves — Hunt will be on in 2017, but finding the source may still be a challenge.

Government Lab Reveals It Has Operated Quantum Internet For Over Two Years — A quantum internet capable of sending perfectly secure messages has been running at Los Alamos National Labs for the last two and a half years, say researchers. I am deeply suspicious of any claim of "perfect security".

No charges to be filed in accidental shooting of Davidson County 10-year-old — Because guns make us all safer. (Via .)

QotD?: What did you have for dinner last night? 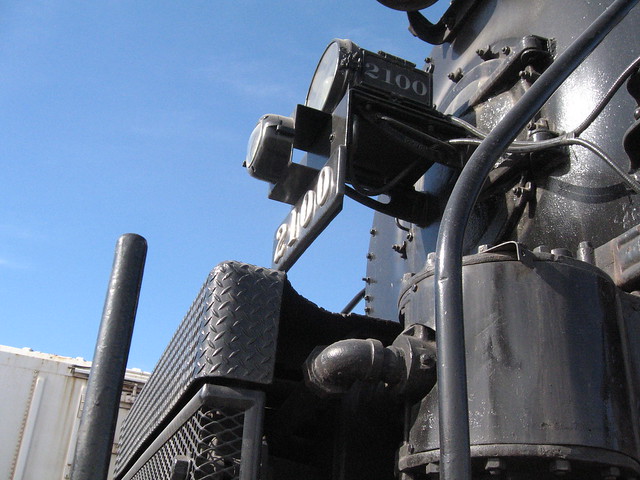 Yesterday was fun, if long. (Like a good date.) , Lisa Costello and I breakfasted as usual. I had a late morning autograph session. We caught a quick lunch, then they headed off for the airport to return home while I geared up for the auction.

I was let off the hook of my ethical dilemma by the excellently good offices of steampunk fan and Gaslight Gathering volunteer Dave Rodger, who is among other things a cattle auctioneer. This violated one my cardinal rules of auction running, which is "Never compete for attention with a cattle auctioneer", but moved bidding along nicely. (Longtime readers will of course recall that my other cardinal rule of auction running is "Never compete for attention with a clown in a straitjacket on a unicycle." Experience is a bitter teacher.) As yet I do not know what the auction cleared, but some pretty amazing items went up for sale, and at a wide variety of prices ranging from painfully underbid to amazingly run up. Such is the way of auctions.

Post-auction, I hung about for closing ceremonies, then rested a while in my hotel room. In the fullness of time, concom chair Anastasia Hunter and a cast of dozen took me out to Phil's B.B.Q., apparently a San Diego institution. Which was quite good, as evidenced by these photos: 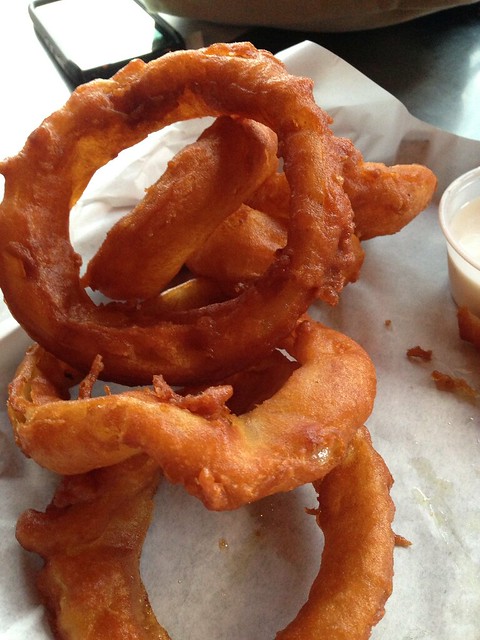 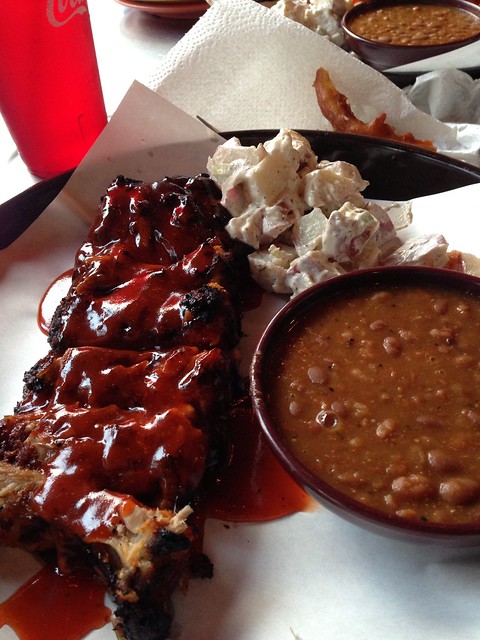 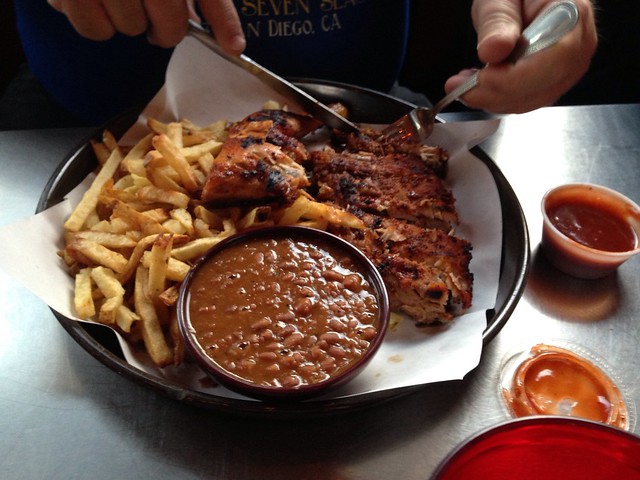 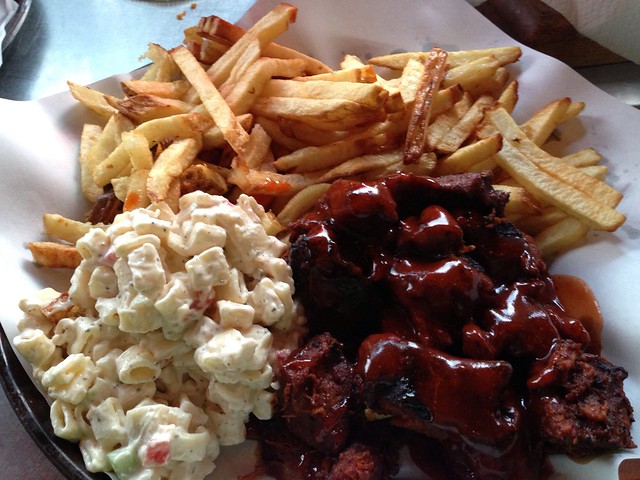 No, I did not Eat All the Things, tempted as I was. Those are the plates of three different diners, that last being my order of boneless pork shoulder. I do find the extremely wide variation in style, presentation and meat selection of barbecue around the country to be fascinating. This was extremely delicious.

Afterward, we repaired to a suite at the hotel for a hilarious yet moderately distressing game of Cards Against Humanity, which is currently my top candidate for Most Inappropriate Game Ever. When we were done, Anastasia had me edit a couple of cards, then autograph them.

This morning I have breakfast with at least some of the concom, lunch with Greg van Eekhout, then I'm off to Portland, where I'll reunite with , Lisa Costello. Starting Tuesday, the rest of this week is dedicated to cancer diagnosis and some likely challenging treatment and life decisions.

I'm very glad I got to spend the weekend here at Gaslight Gathering. My thanks to the folks who invited me, to all the conrunners and volunteers that made this event possible, and to everyone who came to the auction. Also, my especial thanks to all my friends as well as some total strangers who made such amazingly generous donations to the auction. I love the community that is genre.

I had an excellent time at Gaslight Gathering this past weekend. This is the fourth different steampunk con I've attended (speaking off the top of my head), the others being GEAR Con in Portland, Steamcon in Seattle, and the now-defunct World Steam Expo in Dearborn, MI. I've noticed some things about steampunk cons that make them rather different from print-oriented fantasy and science fiction conventions, and in many ways more similar to anime and comic conventions. These differences can confuse authors.

Fundamentally, so far my experience of steampunk conventions is that they are not book-oriented at all. For example, at World Steam Expo, Gail Carriger and I were the only two out of town pro author guests in attendance, with something over 2,000 fan there. Here at Gaslight Gathering, I believe I was the only out of town pro author guest. (In point of fact, I was Guest of Honor.) People are here for a wide variety of experiences. Print publishing is basically a grace note for the steampunk fandom I've encountered. As Kevin Hull said in a discussion here at Gaslight Gathering, "Steampunk conventions are costume-driven." Costumes, yes, and I'll add art, maker culture, re-enactments, and music to that list.

But steampunk cons are very much about story, about narrative. 80-90% of the people you see are in costume. The tradition of hall costumes at SF and fantasy cons is relatively minor these days, but they are nearly de rigueur in the world of steampunk. And unlike the prevalence of cosplay and tribute costumes in the SF, fantasy, anime and comic worlds, steampunk costumes are mostly original work. Almost very one of those people in costume has a story and and character to go along with their creations. Most of them will be happy to explain in great detail, in character, what they are wearing, how it works, and why.

Like I said, very much about story, about narrative. Just not story and narrative the way a book dinosaur like me thinks of it as being packaged and delivered. In effect, the flow of primary creative endeavor is reversed, the fans becoming the creators. This significantly displaces the role of the author.

Hence the confusion. Because superficially, steampunk cons resemble SF and fantasy cons. They are run by many of the same people. They have the infrastructure of programming, the dealer room, registration, con ops, and so forth. Everyone's wandering around wearing badges, most of them with ribbons. It all looks very familiar.

And it's all very different.

The other observation I'll make is that steampunk cons, along with comic cons and anime cons, is where most of young fandom has gone. Hanging around any of these conventions, I see the average age of the attendees is easily two decades younger than the average age at Worldcon, World Fantasy or most other SF and fantasy cons. The kids and young adults are getting their creative buzz on in different way than they were several decades ago.

What does this all mean? Heck if I know. I think it does bode well for the future of steampunk as a cultural element. And these conventions are a lot of fun. But what's going on under the hood is different in some fascinating ways that I believe SF and fantasy authors need to take careful note of and spend time thinking about.

What do you think? Have you experienced the wild, whacky world of steampunk differently? Am I misunderstanding the source and direction of primary creativity in these contexts?