8 biting responses to Erick Erickson's biological critique of 'breadwinner moms' — Because being a conservative means never having to check your facts.

From the Mouths of Babes — Look, I understand the supposed rationale: We’re becoming a nation of takers, and doing stuff like feeding poor children and giving them adequate health care are just creating a culture of dependency — and that culture of dependency, not runaway bankers, somehow caused our economic crisis. But I wonder whether even Republicans really believe that story — or at least are confident enough in their diagnosis to justify policies that more or less literally take food from the mouths of hungry children. As I said, there are times when cynicism just doesn’t cut it; this is a time to get really, really angry. Ah, compassionate conservatism: as always from the GOP, a giant, ringing "fuck you" to everyone who isn't white, male and monied.

The GOP is too juvenile to govern — Also, this just in: water is wet.

Former Bachmann Staffer: Lies Okay Because Her Constituency Believes Them — That's the entire conservative political-media complex in a nutshell, right there. They don't even pretend anymore. Wow. (Via .)

QotD?: Do you know the way to Omaha? 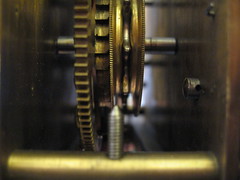 Yesterday, Lisa Costello and I went to see Star Trek Into Darkness [ imdb ].

How you can make such a terribly bad movie with Zachary Quinto, Simon Pegg, Karl Urban and Benedict Cumberbatch is beyond me. It wasn't just bad. It was gratuitously bad. Stupidly bad. Intellectually offensively bad. Sort of like that recent movie that someone who stole Ridley Scott's name claimed to have made. $190,000,000 spent on this dog and they couldn't get a scriptwriter with minimal competence at science, science fiction, plot, suspense or dialog? I could have written a better script. Drunk.

Lisa's first flying snowman came six or seven minutes in. I think I lasted ten minutes before my first flying snowman. After a while, I lost count. I eventually wanted to retitle the movie Star Trek: Lens Flares vs Flying Snowmen. If nothing else, that would have been truth in advertising.

I'll admit this much: it was kind of fun. Stupid, boring, annoying fun, but kind of fun. Seriously, though. Wait for the DVD release. Or Netflix. Or a junior college interpretive dance performance of the script. At a minimum, watch it at home with the sound turned off while listening to old Cheech and Chong routines.

And this movie was made by the man who will make the next Star Wars films? Based on what J.J. Abrams did to Star Trek Into Darkness, I predict an all-Jar Jar cast in a Busby Berkeley style musical about political infighting in the Imperial Senate.

Lisa Costello and I are about to head to the airport for our trip to Omaha. We'll be visiting the children of the corn, along with the Day Jobbe and whatnot. My actual 49th birthday will pass whilst we're there as well.

See some, all or none of you in the jewel of the Midwest.