Naked mole-rat gives cancer clues — A rodent that never gets cancer could hold the key to preventing or treating malignant tumors, say scientists.

Two accelerators find signs of a particle that nobody can explain — There seem to be four quarks involved, but nobody's sure how they're linked.

Demographers Discover The Fundamental Law Governing the Growth of Cities

Personhood Ohio auctioning assault rifles to fund anti-abortion effort — Because nothing says respect for the right to life like a deadly weapon. God bless conservative America, for they surely need it.

Police: Condo complex shooting in Ky. leaves 3 dead, 1 badly wounded — Definitely safer with lots of guns. Imagine how this situation might have turned out without vigorous conservative defense of the shooter's Second Amendment rights. Those dead people are a small price to pay for your guns.

Obamacare Is Killing the GOP — Republicans' obsession with the law will be the party's undoing. We should be so lucky. I'd love to see a functional, sane conservative party in this country. The Republicans are not it. (Via .)

QotD?: What did you dream? 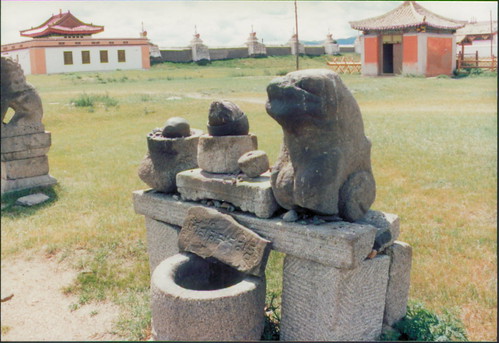 Fragments of the old city gathered at the ruined monastery at the site of Genghis Khan's lost capital. Photo © 1992, 2013, Joseph E. Lake, Jr.

Yesterday, Dad, Lisa Costello and I met with the palliative care specialist. We spoke for the better part of an hour, much of it concerning my medical history and treatment priorities. They gave us a form entitled Physician's Orders for Life-Sustaining Treatments (POLST) which details more of my end of life decisions in the form of a portable medical order. We talked about the difficulty of planning ahead for end-of-life issues given the myriad possible complications. The doctor made the point that I was just as likely to die of one or another of those complications rather than liver failure -- infection or pneumonia, for example. We had not realized this before now. Their point was that detailed advance planning was unlikely to be particularly fruitful until we know more about the course of my disease and the processes of my decline.

We also talked about the processes of liver failure. The doctor explained that unlike people with primary liver cancer, who typically already have seriously compromised liver function, people such as me with metastatic disease in the liver often have a useful amount of liver function even well into the late stages of illness. The tumor growth isn't replacing liver cells, as such, so much as squeezing them aside. The liver is fairly elastic, in several senses of that term, and can continue to function even with substantial tumor growth. I had not known this. The implication for me is that I'm not likely to see significant liver failure complications until very near the end of my terminal decline. At that point, they will be rapid and severe.

Another topic we discussed was my sleeplessness. I was prescribed trazodone, which I took last night. So far, I am not sure what to think. I slept oddly and woke up groggy (which is unusual for me), but I got an extra 90 minutes or so of sleep compared to my recent baseline. It was less satisfying, however. We shall see.

I am going back to the palliative care specialist in mid-August. That will be after the next scan, where the effectiveness of my Regorafenib treatment can be evaluated, and we'll likely have a somewhat clearer picture of my expected survival time.

Fred is elusive these days. Which frustrates me.

Tuesday I'd managed to put in over an hour on revisions and editorial tasks, mostly connected to METAtropolis: Green Space. This after a week+ lost to JayCon and related festivities, overlapped with six days of not having my MacBook Air available to me. "Yay," I said to myself, "I am back on the horse."

Then yesterday I spent the entire day dealing with either Day Jobbery or the disability application process or visiting the doctor. My energy is not what it was, and neither is my efficiency. By the time all this was done, around 5 pm, I was simply too exhausted to then deal with writing.

Mind you, I used to be able to work all day and write all evening. Not so much anymore.

The scary part is that I already know this is how my writing will end. I will simply peter out, too tired one day to put the time in, then the next, then the next, while the brain fog of chemo and cancer settles in ever deeper until one day I'll realize I haven't done anything in a month, and there aren't very many months left for me to live.

So every time I miss a day, I wonder if this is the beginning of the end for my writing. Yesterday wasn't that day, I do know this. But it sure felt similar.