Return of the Girl Cooties — Cora Buhlert with another good roundup about sexism in SF, with a lot of commentary.

Choice of Health Plans to Vary Sharply From State to State — (Thanks to Dad.)

Perigee's Full Moon — A lovely APOD photo of moonrise over the Temple of Poseidon.

Some beautiful kinetic art from the Netherlands — (Via AH.)

Ruins of Maya City Discovered in Remote Jungle — I think it is so cool that there are still lost cities in this GPS-enabled, satellite-mapped world.

The Fighter Jet Take-Off Platform — This be some weird shit, Maynard.

This Man Wants To Power The World With Tornadoes — Fueled by farmhouses?

The MEMO Project — A memorial to lost species. (Via H—.)

HPV Vaccine Is Working. Again. — Vaccination denialism is particularly horrible, because it brings risk and harm to the children of the deniers as well as everyone else. Climate change denialism, for contrast, is a more generally harmful form of willful idiocy that doesn't have much direct correspondence with outcomes in the deniers personal life.

Annals of Surveillance: The Prism — Privacy in an age of publicity. (Via .)

The Real Reason You're Mad at the NSA — On strategic intelligence as a national attribute. (Via Lisa Costello.)

U.S. Immigration Services Believes an Atheist Can’t Be an Conscientious Objector? — Well, you know, atheists can't be trusted. What with their long history of burning people at the stake, slave labor in the Magdalen laundries, widespread coverups of pedophilia, hypocrisy on abortion and poverty, spirited defenses of slavery, segregation and gender-based discrimination, and so forth, atheists can't hold a candle to the virtues of religious folk. Wait, what…? (Via .)

For One Gay Christian, a Search for Understanding While Hanging on to Faith

Religious right will hold breath, turn blue, if DOMA overturned — “We will not stand by,” the statement harrumphs. But, actually, yes, yes they will. Standing by is exactly what they will do because that is all they can do. This doesn’t affect them. It does not harm them — it neither picks their pockets nor breaks their legs. It doesn’t compel them to do anything. It doesn’t compel them not to do anything. They are by-standers to something happening elsewhere, to other people.

Family Policy Institute of Washington Misrepresents Facts in a Child Rape Case — Pretty sure this guy is down with the Biblical verses about homosexuality, yet considers himself exempt from the Ten Commandments. Either that or American Bibles obviously have a footnote to the commandment against bearing false witness which exempts lies told about Planned Parenthood. (Via Slacktivist Fred Clark.)

Controversial GOP NH Rep. Tremblay resigns — Tremblay alleges Marathon bombing may have been faked. Apparently the New Hampshire GOP did the right thing here. If only she'd been in the US House where conservative lunacy is apparently a job requirement, Rep. Tremblay would be a folk hero rather than an outcast. (Via Slacktivist Fred Clark.)

So When will Dick Cheney be charged with Espionage? His Crime was the Same as Snowden’s — It's not treason when Republicans do it.

Illinois GOP Pol Calls Black Female Candidate A ‘Street Walker’ — Because conservatism. Are you proud of your Republican party?

QotD?: Does anybody remember laughter? 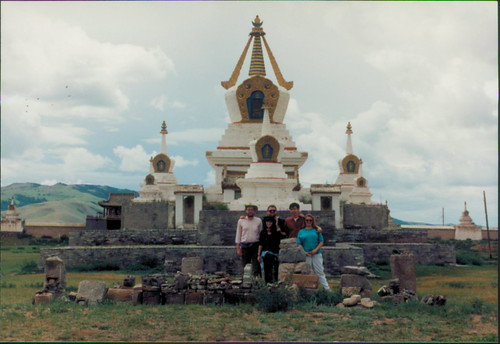 Our traveling group in front of the South Asian style temple at the ruined monastery at the site of Genghis Khan's lost capital. Photo © 1992, 2013, Joseph E. Lake, Jr.

Yesterday was another manic, overly full day. I attended a talk on the ACA implementation in Oregon, sat for a film interview for a couple of hours (not related to the Lakeside project), and was part of a very nice dinner party hosted by Jersey Girl in Portland at the house she shares with Lisa Costello.

Then last night the trazodone kicked in. I slept over ten hours. Given how short slept I've been for the past month, that was like a miracle. I normally detest sleeping so long, but man did I need it. As a result, I got a very late start on today (by my usual standards). I have a lot to do, but it's not a full day's worth of lot. And except for a lunch with Lisa Costello, and half of Team E—, I don't have any outside commitments.

So, yeah. I will finally get caught up on email and minor tasks. Which will mean I can write tomorrow.