It was long after midnight when we got to unconditional love — Lisa Costello talks about her feelings about the current stage in my cancer journey.

The Year's Best Science Fiction - 30th Annual Collection — Go check this out. I'm in it.

The Decline and Fall of the Book Cover — (Via AH.)

REVIEW: Bared to You by Sylvia Day — Wow, what a review. Snarkalicious. (Thanks to Marta Murvosh.)

A penguin being tickled — I will die of teh cutez. (Thanks to David Goldman.)

Chinese Cuisine Patterns Revealed By Food Network Analysis — The links between different regional cuisines in China become clear when recipes and ingredients are viewed as a kind of web, say computer scientists.

Molecular signals identified that let some organisms regrow lost heads — Manipulating the signals can produce a worm with a head at both ends. I've known some people like that.

Pale Blue Dot: An Alien View of Earth — NASA's Jet Propulsion Lab used to have just such a display with the full mosaic of photos posted up in an auditorium, says Hansen-Koharcheck. "And to show the whole thing it covered, oh, I don't know, 12 or 14 feet," she says — of mostly empty black space, with just a few pinpricks of light showing the planets. One of them was labeled Earth. "One of the guys that took care of that display told me one time that he was forever having to replace that picture," says Hansen-Koharcheck, "because people would come up to look at it and they would always touch the Earth." (Via David Goldman.)

Architecture: Designs for the Great Tower For London in 19th Century catalogue — A response to the Eiffel Tower? (Via .)

Hauling New Treasure Along the Silk Road — Centuries ago, the cargo on the Silk Road across Asia included spices and gems. Today, it’s likely to be computers and other electronics, moved by rail along an often-desolate 7,000-mile route. (Thanks to Dad.)

Arctic methane 'time bomb' could have huge economic costs — Man, those crazy liberals and the shit they get up to in order to try to hoax good conservative "true facts". To think that an entire planet's ecosystem and climate would cooperate in such chicanery, not to mention 99% of the scientists in the climate field. Thank God for Rush Limbaugh and the Republican party, or we might have been tricked into doing something.

Virginia governor GOP candidate Ken Cuccinelli launches website that pushes for reinstatement of state's anti-sodomy law — The state attorney general also wants oral sex between consenting adults to be a felony even though a federal court struck down the state's 'Crimes Against Nature' law in March. As Cuccinelli wants to make the private sex lives of every adult in Virginia a matter of public interest, I think he and his wife should lead the way with complete disclosure of their sexual practices. This is what it means to be a conservative, right?

Rise of the Warrior Cop — Is it time to reconsider the militarization of American policing? Sigh. (Via .)

George H.W. Bush Shaves Head In Solidarity With 2-Year-Old With Cancer — I don't have a lot of use for Bush the elder. He helped enable the political and cultural disaster that was the Reagan years. He bears enormous responsibility for Dubya's existence in many sense of that phrase. And Barbara Bush is one of the most manipulative, dishonest characters in late 20th century politics, all of Nancy Reagan's petty vileness in sweet grandma drag. But nonetheless, I have to give props to Bush 41 for doing this.

QotD?: Ever had your lease on life renewed? 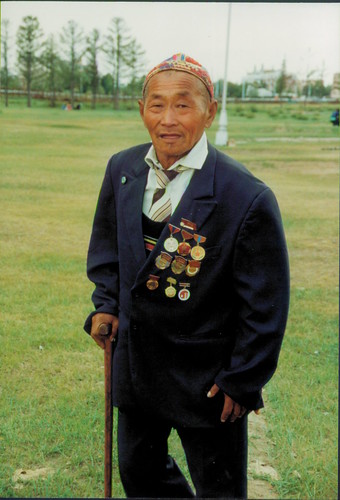 Lisa Costello, Dad and I met with my oncologist yesterday. They had both the CT and PET scan reports with them, which had not been pre-released to us.

Not to bury the lede, the news was about as good as news gets for me these days.

Basically, the tumors in my lungs have continued to grow, but modestly. The largest is about 10 mm. No new ones have emerged that were detectable by scan. As my oncologist says, this is not the most dangerous part of things. While unfortunate, we can live with this for now.

The abdominal tumors, in my liver and in omentum, have shrunk. Again, no new ones have emerged that were detectable by scan. This is a significantly good step, as it indicates the Regorafenib treatment has been effective. Shrinkage is in fact unexpected, as we were hoping for static size or minimal growth.

We discussed the recent highly elevated CEA levels which had so alarmed everyone. My oncologist is not sure what they mean, and neither are their colleagues. Possibly cancer cells under attack are releasing CEA as part of their stress. In effect, this is the first time CEA has given me a false positive. Which is a good thing.

The doctor characterized me as being an outlier, or even outlier to the outliers. My survival time is reaching unusual lengths. They felt like I could look forward to another nine to eighteen months of life, given the drug performance. That is sufficient time to possibly survive long enough to see next-generation treatments become available.

So good news, or at a minimum, least-bad news.

Last night, Lisa Costello, and I were discussing yesterday's consultation at some length.

This is good news. Good news in a fantastic number of ways. It means I'll make it to Worldcon. It means I might even have a chance to go to a few more events later on, if my current state of health holds. (Now I'm dreaming of going to the UK for WFC.) It means my friends and loved ones who come to visit me will find me able to be myself for them. Not a gasping patient recumbent in a powered chair. It means I can see into and possibly through another year.

My lease on life has been extended, by at least a few months. In my current state, a few months is tantamount to eternity.

Hope is a poison that kills sweetly and slowly. Hope has me believing things that are hurtfully untrue. Hope creates expectations that will be shattered. If cancer has taught me anything this past half-decade, it is to never trust in hope.

So instead I plan, and make contingencies in case those plans go awry. And I limit myself, because even with this good news, I live in a body that exhausts too easily and doesn't always cooperate with even the minima of day-to-day existence. And I am careful to tend that shell I have built, like a caddis fly, out of fragments of pain and discomfort and anger and fear.

Because if I hope too much, I hurt too much. The cancer always raises the stakes. Just because I won this hand doesn't put me up for the game. Not at all. I cannot let myself be tricked into thinking that might be the case. Not even for a moment.

Best to live for this day, and the reasonable anticipation of a few extra days between now and the end.