Ken Scholes will be interviewing me for Lightspeed — He's soliciting questions from you.

Climate Change Spells Trouble for Anglers — New science reveals threats to prize fishing streams in warming world. I never fail to be amazed at the lengths liberals will go to for their climate change hoax. 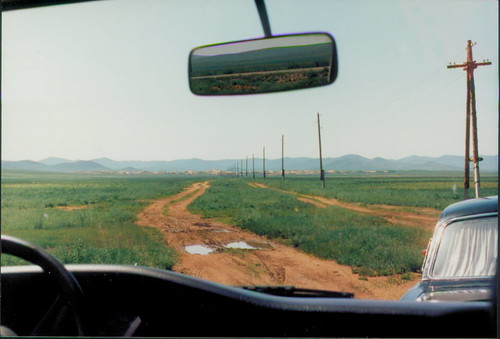 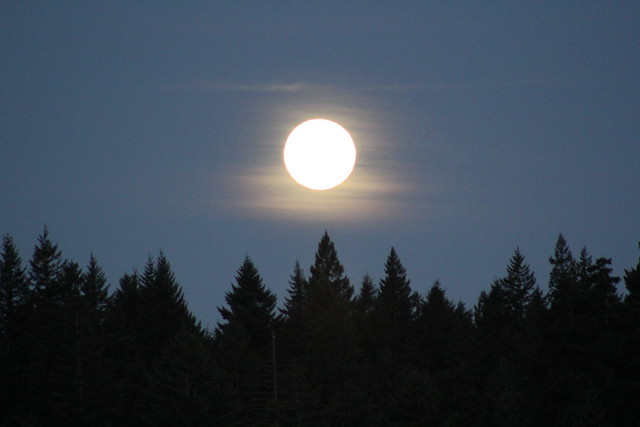 We left our house about 4 pm on Tuesday, July 30th. Traffic was terrible getting to the airport, and I began to worry about timely check-in, except I discovered via FlightTrack that our flight was delayed. When we got to the airport in Portland, then line to reach the counter was incredibly slow. This was due to the previous San Francisco flight being cancelled, and thus everyone having a problem requiring special handling. In this day and age of low staffing levels and machine check-in, exception handling becomes a disaster for both the airlines and their passengers.

We were essentially the third party in the check-in line, and yet as people at the counter were being helped, the United Airlines agents kept disappearing. We had arrived around shift change, and they were going off one by one. When we finally did get helped, there were two agents left, and the line behind us had grown enormous.

It turned out that San Francisco's airport was on a 120-180 minute air traffic delay due to runway slowdown caused by a combination of heavy fog and smoke from forest fires in southern Oregon. However, long haul and trans-Pacific flights were not on the same delay. This meant our delayed connection would arrive after the non-delayed flight to Auckland had left.

The United agent spent twenty or thirty minutes going through all this with me. The next day's flight was full due to the number of people who'd missed connections that day. We would have to come back two days later. Even then, if the fog and fires were continuing, we might be right back in the same situation. We looked at routing through Los Angeles, Honolulu or Vancouver. Because of the recent Pacific typhoon, Honolulu was impossible, and seats through the other two cities were unavailable due to the overflow from the problems in San Francisco and Honolulu. They could get us to Sydney via a later flight out of San Francisco, but for some reason could not get us from Sydney to Christchurch, which was our original destination. They could get us to Sydney to Auckland.

It was either go to the wrong city 1,000 miles away that day, or come back in two days and take our chances with continuing flight delays. We took the Sydney-Auckland routing.

This is how we wound up going to Australia by accident.

This whole process took better than half an hour, and wound up tying up both available agents as the line behind us grew both enormous and irritated while no one new came back on duty at the United Airlines desk..

The change had some other implications as well. Going trans-Pacific on United instead of Air New Zealand resulted in us being seated in United Economy, which is a lower class of seat than we had on the original Air New Zealand flight. (If you've never flown United, they have an Economy Plus, which is reasonable economy seating with more leg room, and regular Economy, which is cattle car seating.) On arrival in San Francisco, after being wheelchair transported to our United international departure gate, I wound up buying us Economy Plus upgrades to restore the legroom we'd purchased with the original tickets. That set me back almost $600, but I figured 13 hours with our knees crammed up around our ears was going to make all three of us crazy.

Also while in San Francisco, I tried to book Air New Zealand domestic tickets from Auckland to Christchurch, to complete our routing. (Mind you, I'd already paid quite a bit of money for tickets to Christchurch with the original booking.) Unfortunately, by the time I was able to deal with this, I was on the aircraft, and could only use my iPhone. Air New Zealand's Web site is not iPhone compatible, and kept freezing about halfway through the booking process. You might well imagine my irritation at this.

To further compound the issue, when and tried to book us that same ticket from inside New Zealand after some frantic text messages from me, the pricing for an in-country booking on the exact same flight was more than double the pricing for me to book from San Francisco. I was looking ay $NZ215 per seat, they were seeing over $NZ500 per seat. Which would have been fine, except the Web site didn't freaking work from the U.S. Air New Zealand was forcing us to buy at the higher price.

The United Airlines flights from Portland to San Francisco and San Francisco to Sydney were fine in terms of the in-flight experience. Assuming you don't mind spending 15+ combined hours seated in Economy class.

It got complicated in Sydney. We were transiting, so did not need to clear customs or immigration, but we did need to go to the transit desk for our Air New Zealand boarding passes. Air New Zealand does not seem to have any staff in Sydney, as everything is handled by a third party contractor. Our tickets were screwed up due to the re-route, and the counter person at the transit desk had a lot of trouble even getting us the Auckland boarding passes. When I tried to negotiate a re-route to Christchurch per my original ticket, I was told that only someone with access to the Air New Zealand booking system could help me. That included absolute no one in the Sydney airport due all the ground staff being third part contractors. There was literally no one present in the Sydney airport (at least in any way accessible to me or the counter agent) with either access to the Air New Zealand systems or authority to do anything to problem solve. Then they had trouble with our luggage routing. Then they couldn't get my name into the system. My full legal name includes a "Jr" after the "Lake", and this apparently causes fits to the Sydney airport computers.

Much as in San Francisco, this whole process took almost half an hour, tied up the only available Air New Zealand contract transit agent, and generated an enormous and irritated line behind us. And no matter what we tried, we couldn't get to Christchurch. Which was the original destination we'd paid almost $6,000 to reach in the first place. I was told to call the airline's customer service number to discuss my Christchurch routing. Except, not having an Australian capable phone (remember, we went there by accident, so I had not activated an Australian voice or data plan), I could not do so.

When we got to our gate, I used the airport Wifi to finally make my Auckland-Christchurch booking. I spent about $NZ650 to do this, but it at least got us to our destination, about eight hours later than intended, at the overseas price rather than the doubled domestic price.

Combined with the United seat upgrades, I was now out $1,200 in unplanned expenses.

Once again, the in flight experience was very nice. Much better than any U.S. airline I've flown, ever.

On arrival in Auckland, it got weird again. We came in at the international terminal. I'd requested a wheelchair assist which came in the form of a very pleasant young man named Chris. We got through immigration just fine, eventually collected our bags, but got hung up in biocontrol. Lisa Costello had a pair of hiking boots we hadn't properly declared on the forms. This got us pulled aside by a polite and methodical Detective Inspector for an interview and the shoes being taken away for processing and decontamination. Lisa is now in the New Zealand biocontrol database as an offender and was sternly warned that a repeated offense would have substantial penalties. Apparently, the fact that we were let go without paying a large fine was an act of generosity on the part of the Detective Inspector.

All of this, however, soaked up an immense amount of time. I was pretty worried about making the connection. This is especially true in Auckland, where the international terminal is completely separate, and due to the nature of our bookings, we couldn't just pass our bags through the transit area and continue on. Instead, we would have to exit the international terminal, proceed to the domestic terminal and check in from scratch.

No disabled access was available between the terminals, my wheelchair aide could not take me there, and the intraterminal shuttle had been discontinued. This is kind of a problem. Lisa Costello and took the luggage on trolleys and walked the ten or fifteen minutes. I waited for the city bus, which eventually came, then dropped me at the other terminal.

Domestic check-in was a nightmare.

Air New Zealand operates on a very low-service model, even more stripped down than US airlines. This again means if exception handling is required, too bad for the passenger. We were nothing but one giant exception.

First of all, the check in machines would have nothing to do with us. I'm not sure if this was the recency of the booking or our US passports or what. There was only one person at the service counter, and a line of about twenty young women — a volleyball team, I think — was waiting there. At that point, we had less then an hour to make our flight. The women were very nice to let us cut in front of them.

Our local tickets were not much of a problem, though my "Jr" seemed to give them more issues, but our luggage was. When we'd originally booked and packed, we had an international ticket all the way through to Christchurch. The international weight limit is 23 kg per bag. That's what we packed for. The New Zealand domestic weight limit is 20 kg per bag. Absolutely no exceptions. No option to pay overweight fees. Because this was a separate booking, due to the earlier in-flight issues, we were stuck with the 20 kg limit. This involved some significant and urgent repacking. The reasons we'd arrived with a 23 kg bag were happily irrelevant to the Air New Zealand counter rep.

Then either we were given the wrong instructions for delivering the baggage to the carousel, or we misunderstood them. We dragged our bags over to the bag checker, but were not in proper form with the tags. They were rather brisk with us, then ostentatiously began a long personal conversation with another employee while we were trying to ask for help in getting things right. Eventually we go sorted despite the passive-aggressive rudeness of the Air New Zealand baggage handler, and trundled off to our flight.

Again, the in-flight experience and cabin service were fine. Arrival at Christchurch was fine. But the whole trip experience…?

Most expensive tickets I've ever bought. $1,200 extra in costs along the way. Abominable customer service from Air New Zealand and poor customer service from United Airlines. Terrible airport systems designs that are profoundly punitive to anyone with an issue that doesn't fall neatly inside the anticipated workflow. Eight hours late with an accidental trip to Australia.

All in all, the worst flight experience I've had in many, many years. Neither United Airlines nor Air New Zealand is responsible for the San Francisco flight delays, but all the issues and expense that flowed out of that problem could have been handled much, much more gracefully than they were.

I will never, ever fly Air New Zealand again, and strongly urge that anyone considering a trip on that airline reconsider any other possible option.