Large earthquake causes mud island to rise from the sea — Temporary island is seething with methane.

Weekend Diversion: An Underwater Waterfall? — This is pretty wild. (Via .)

The Neuroscience of the Gut — Strange but true: the brain is shaped by bacteria in the digestive tract. (Thanks to Lisa Costello.)

With a Solar Minimum and La Nina’s, Why isn’t it Really, Really Cold? — Those denialists who write in to tell me that as a historian I ought not to be pronouncing on climate issues do not know very much about contemporary historical methods. Denialists by definition don't know very much. If they did, they wouldn't be denialists. Nobody comes to climate change denialism based on a review of the evidence and methods — it is always a pre-existing conviction for which support is sought. Exactly like evolution denial, which no one ever comes to based on the evidence, either. This is why journalists and teachers often lean liberal. When you actually learn about the world through critical thinking instead of an ideological lens, it's awfully hard to hold on to both intellectual honesty and conservative convictions.

Who is an American? Racist Twits and the Rest of Us

Catholic US Military Chaplains Banned From Presiding Over Funerals Of Married Gay Soldiers — Because nothing speaks to Jesus' love like persecuting the families of war dead. I am so glad I am an atheist, because actions like this would make me die of shame if I were a Christian. (Via Slacktivitist Fred Clark.)

Poll: Tea Party Support Shrinks To 'Near-Record Low' — Though the early pretense of non-partisanship fooled a few wishful thinkers, the Tea Party never was anything but a blatant GOP front group from day one. Which makes me wonder why it's polling so poorly now, since so many American voters seem perfectly happy with the profoundly destructive economic and social agenda of the Republicans.

?otD: Is it all right to have a fatted calf? 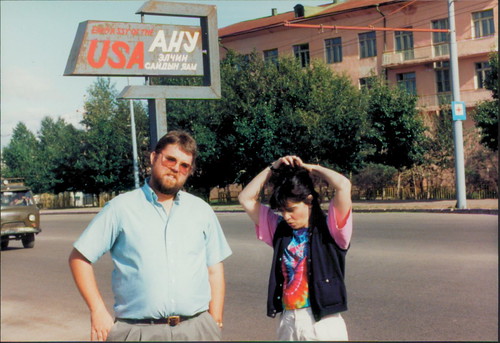 Me and Mother of the Child in front of the sign marking the location of the US Embassy in Ulaan Baatar, Outer Mongolia. Photo © 1992, 2013, Joseph E. Lake, Jr.

Yesterday was a very difficult day for both me and Lisa Costello. Life is stress these days, and sometimes the stress gets away from us.

So more blogging tomorrow, perhaps, but not a lot to say today.