The C-Word or “C” is for Cancer — Author Eugie Foster is in great and sudden need, something I understand all too well. I will be shifting some of the funds raised for me to Eugie. Please join me in helping her.

You can do a lot in a lifetime if you don't burn out too fast — Lisa Costello on her first year in Portland (with me).

METAtropolis: Green Space is now available for pre-order — Edited by and me. Stories by Elizabeth Bear, Tobias S. Buckell, Mary Robinette Kowal, Seanan McGuire, Ken Scholes, Karl Schroeder and me. Check it out.

A favorable Russian review of Escapement

Galloping robot "WildCat" — Crazy video. (Via , among others.)

When to Catch a Lie via Text — A recent experiment finds that when people are about to lie via digital text they take longer to construct their words. I can think of about a million things wrong with this, but it is still interesting. (Via David Goldman.)

Shutdown Stops T. Rex Trek in Its Tracks — The ongoing government shutdown has stalled plans to haul a near-complete T. rex fossil to its new home at the Smithsonian National Museum of Natural History, a federal institution forced to shut its doors last week.

Creationism and Climate Change — Skepticism about evolutionary science, it seems, bleeds over into suspicion of all mainstream science. If mainstream science has been proven, from creationists’ perspective, to be a naked emperor, then its conclusions on every topic must be treated warily. I've been saying precisely this about conservative politics and culture for years. Privileging evolution denial has validated magical thinking at all levels and devaluated evidence-based reasoning. (Via Slacktivist Fred Clark.)

Judge Demands Sikh Man Take Off His “Rag” — American conservatives: always at the forefront of the battle for religious liberty. Their religious liberty, not anyone else's, of course. Sarah Palin "real American" bonus points for total indifferent ignorance about the differences between Muslims and Sikhs. (Via .)

A Ghost of May Days Past: East Germany Rises Again! — Politics and the map.

Inquisitive Justices? No Argument There

What did Justice Scalia mean? — A linguist takes on the Supreme Court's most narrow-minded and intellectually dishonest justice. (And that's saying something.)

Why the Devil Quit Bothering Pigs, According to Justice Scalia — And this man sits on the Supreme Court. Are you proud of your Republican party?

The Craigslist Ad That Will Make The Government Shutdown Seem Hilarious — This is pretty funny.

How Democrats Got a Spine — “Dealing with terrorists has taught us some things,” said Washington Rep. Jim McDermott after voting no on one of Thursday’s GOP bills. “You can’t deal with ’em. This mess was created by the Republicans for one purpose, and they lost. People in my district are calling in for Obamacare—affordable health care—in large numbers. These guys have lost, and they can’t figure out how to admit it.”

Deadlock — Jim Wright on the government shutdown. A must-read, especially if you consider yourself a supporter of the shutdown.

The Importance of Competence — Losing the last election seems to have exhausted Republicans’ patience rather than forcing them to scale back their ambitions. Winning parties are often guilty of overreaching and imagining that they have an electoral mandate to advance their preferred agenda no matter what, but it is very unusual for a losing party to have the same delusions of grandeur. The simple answer to that is that Republicans don't think they lost. They've never considered Obama's victories legitimate. Listen to their rhetoric: conservatives see themselves as the aggrieved victims of liberal conspiracies to steal elections. They know perfectly well how much they have to manipulate voting rolls, turnout and polling to win, and cannot imagine Democrats doing anything different.

?otD: Have you been living underground, eating from a can? 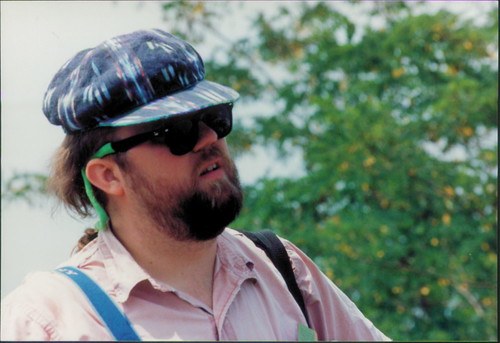 I'm not a fiend for perfect restaurant service. I know wait people get tired, kitchens get busy, and everybody messes up once in a while. Generally, I have a lot of patience and a high tolerance level for eccentricities of table service.

But last night, Lisa Costello and I had one of the worst restaurant experiences I've had in quite a while at Outback Steakhouse over here in SE Portland. Comparable to my very bad experience at Papa Haydn about this time last year [ jlake.com | LiveJournal ]. Much as with Papa Haydn, the evening was sufficiently irritating that I won't voluntarily go back to the restaurant ever again.

On entering the restaurant, we were seated immediately in an otherwise empty section. There were very few diners in the place, as we had arrived relatively early in the dinner hour. A little more than five minutes later, we had to ask the host to send a waitperson to our table, as there had been no attention at all. The section was simply dead. He rolled his eyes, which I did not appreciate, then headed off to the kitchen. A waitress shortly appeared.

We placed our order, which was simple with no special requirements. It came out very slowly, and piecemeal. Two appetizers arrived about ten minutes apart. The steak arrived about forty-five minutes after we ordered, just after I'd politely complained to the host, who again was indifferent. Others around us entered the restaurant, were seated, ordered, served and finished their meals in the time it took our entree to come to table. The waitress never acknowledged this and made no attempt to explain the slowness, make up for it, or secure us our food. (She did eventually take one of our appetizers off the bill.)

What the heck do you do as a diner in that situation? I respect that food service is a tough job on its best day. The waitress was not being personally rude to us. I'm a little too well socialized to raise hell, though I did speak to the host twice, for all the good it did me.

Restaurant politics are funny. The whole low-wage/tip thing is weird. (There's some history about it here, in an otherwise fascinating article about a tipless restaurant.) And I know chances are good the problem had little or nothing to do with our waitress. But her job is to be the restaurant's face to its diners, and her job includes making sure people know what's going on. Even a plausible lie about some embarrassing kitchen screw up would have been better than the dead silence and excruciatingly slow service we received.

I think that's what frustrates me the most. That lack of communication, that lack of service in the larger sense of the term. The indifference.

At any rate, this is the first time I've set foot in an Outback Steakhouse in years. It's also certainly the last. My life is too short, literally and figuratively, to put up with this crap. Especially when I am lucky enough to live in a place like Portland with hundreds of wonderful restaurants to choose from.

sent me some photos of a trip he and I had taken in high school, summer of 1980 or 1981, to visit my mom in Texas. Ah, memories. I was so entranced that I decided forthwith to inflict a portion of my high school experience on you. 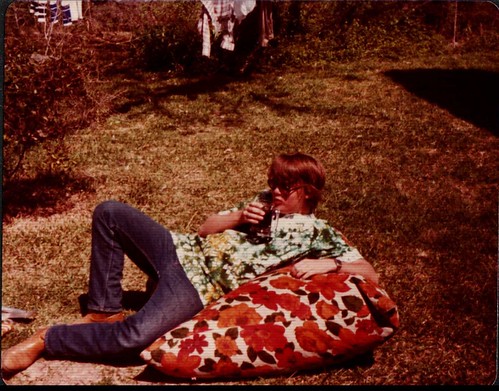 Me, louche and feral at about sixteen, and already with the impeccable taste — note the dashiki and cowboy boots 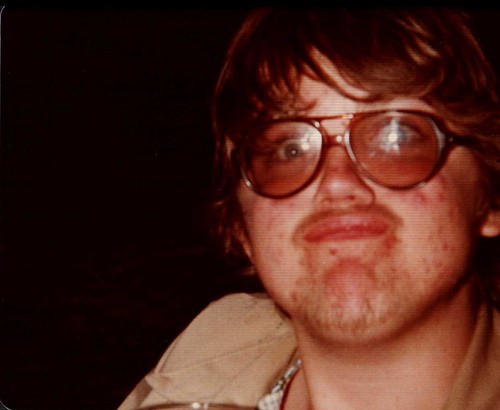 A warm smile and a pretty face always made me popular 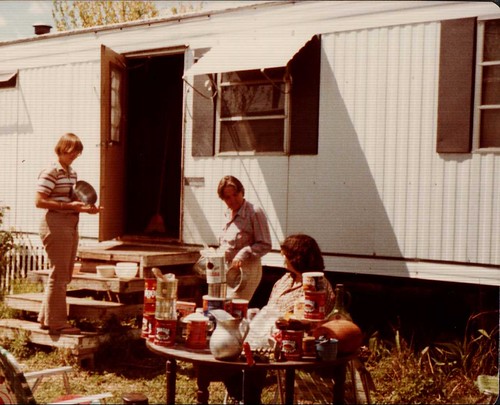 Lunch with , a/k/a my mom, and the neighbors 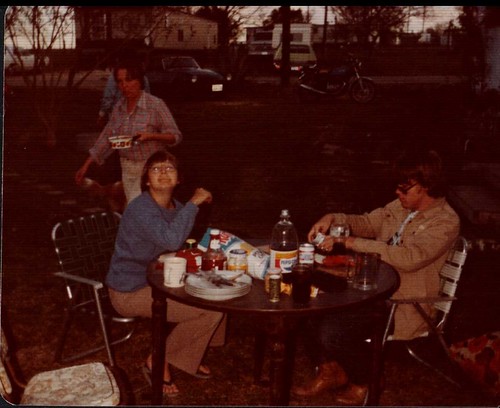 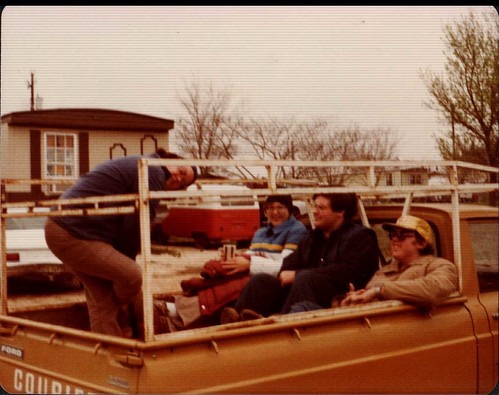