Spatial Delirium: An Interview with Michael Light — This is a "wow" read in a number of different ways. Piece ranges from failed Las Vegas developments to diving in the nuclear shipwrecks of the Pacific atomic testing grounds.

A Colorful Gathering — A mystery explained.

Why A Little Mammal Has So Much Sex That It Disintegrates — I've been on dates like that. (Thanks, I think, to Ellen Eades.)

Mercury Azides. I'll Get Right On Those For You. — Explosions are definitely underappreciated as a mixing technique. Ah, chemistry humor. (Via David Goldman.)

Destroying so many little lives — Crime as corporate endeavor. (Via David Goldman.)

Is Profit the Ultimate Value? On JP Morgan’s $11b Fine — Sigh. This story says so much about what has happened to our culture and our economy.

Seven Habits of Highly Ineffective Political Parties — When it comes to major policy battles, since 2009 the GOP is 0-3. Before it fails again, David Frum offers up seven ways the party is shooting itself in the foot. Things extremists should not do. I object with the piece's thruway assessment of Obamacare costing more than we can afford — it's actually a net budget reduction, and that is just a nod to the usual conservative lies — but otherwise this is pretty interesting. (Via .)

Shutdown Cancels US Antarctic Research Program — Any good conservative will tell you science is bad. It encourages critical thinking, and as the Texas GOP has pointed out, that might cause fewer people to vote Republican.

Dear Tea Party: The Gov’t Shutdown is Hurting White People, Too — Making American science and technology less competitive in world terms, compelling our scientists to emigrate to countries that more reliably support their work, risking the public’s health, and harming investors– none of that helps the Tea Party constituency. How odd that they appear to think that it does.

Reagan and Debt Ceiling “Blackmail” — House Republicans are behaving in a way that is less reasonable than behavior that Reagan dubbed blackmail, and they are doing it with no chance of success. On top of that, they are potentially exposing the U.S. to real harm in the process.

Domestic Violence Programs Brace For End Of Federal Funds After Friday — Your Republican party: enabling rapists and abusers nationwide, which is a small sacrifice in the patriotic cause of opposing the scourge of more affordable healthcare. (Via Slacktivist Fred Clark.

?otD: Are you a writer and arranger, and a young boy bearing arms? 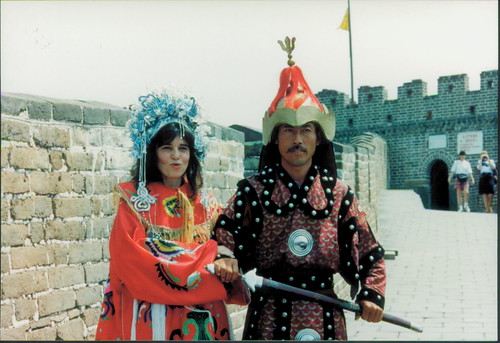 At Crater Lake National Park, there are fossilized steam vents along Castle Creek.

Pretty much what it says on the tin

Fumaroles cut through the ash fall of the Mt. Mazamas eruption

According to the sign, the streambed was buried in several hundred feet of ash and pumice during the Mt. Mazama eruption about 7,700 years ago. Water trapped at the bottom was boiled to steam and forced its way up through the ashfall, leaving behind fumaroles.

As previously discussed, thanks to the extreme generosity and support of Unnamed Benefactors, Lisa Costello and I will be at World Fantasy Convention in Brighton at the end of this month.

I'll actually be flying over on October 23rd, arriving on the 24th and going straight to Paris to visit friends until the 26th, then back to London staying with friends until 30th. Lisa arrives on 31st, and we're down to Brighton, flying home on the 4th.

Due to my ill health and mobility impairments, and the resultant travel fatigue, my schedule will be quite light. However, there will probably be some kind of public event or appearance in Paris, which I will announce. I may also have a bit of social availability in London, so if you're hoping to see me, let me know. And of course we'll both be in Brighton and generally available to the extent my health allows.