The Civil War in COLOR for the first time: Painstakingly remastered images of a divided America that recreate era in amazing detail — (Via Lisa Costello.)

Elephants and humans have 'unique bond'

Ravenous dwarf sucks life-giving juices from unfortunate victim — I've been on dates like that. No, wait, it's The Register talking about astronomy.

By 2047, Coldest Years May Be Warmer Than Hottest in Past, Scientists Say — Nothing to see here, citizen. Just liberal lies from the pit of Satan. Move along.

Half of Evangelicals Believe Prayer Can Heal Mental Illness — It's really hard for me not to be very unkind about this one. Headline kind of speaks for itself. (Via Slacktivist Fred Clark.)

Business Groups See Loss of Sway Over House G.O.P. — “We are looking at ways to counter the rise of an ideological brand of conservatism that, for lack of a better word, is more anti-establishment than it has been in the past,” said David French, the top lobbyist at the National Retail Federation. “We have come to the conclusion that sitting on the sidelines is not good enough.” Sitting on the sidelines my fat, white ass. You bought and paid for those clowns, and inflicted them upon the entire nation. Nice to see American business waking up. Would have been a hell of a lot nicer if American business had possessed a shred of common sense or patriotism sometime over the past two decades while building the GOP's empire of moron legislators.

Republicans Were Never Going to “Win” the Shutdown — Too many on the right believe false promises of unlikely or impossible political victory, and the false expectation prompts them to make futile stands that end up worsening their already weak position. Welcome to the reality-based community, House GOP, where your cherished political beliefs do not have the force of fact or law or even rationality.

The WSJ/NBC Poll Is a Complete Republican Rout — When that many people in your own party are against what you’ve been doing, it is absurd to believe that you are in a position to “win” anything.

?otD: Do you wake up fast or slow? 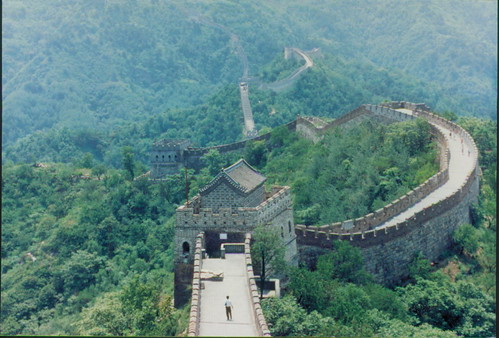 While visiting Klamath Falls last weekend, we found this gem, around milepost 234 of US-97. I know the milepost because as we went whizzing by the first time, Lisa Costello told me to note that number so we could find it again. I pointed out that this giant, malformed cow was the only thing besides pine forest for twenty miles along that stretch of highway, and we probably wouldn't have any trouble finding it again.

The locals tell us there used to be a small private theme park there with dinosaur statues. The location is now a truck parts supplier, and the other dinosaurs are behind a locked fence, but this bad boy keeps guarding the road in the years of his sad decline.

And yes, I know he's not a dinosaur, he's a mammal. Maybe a Paraceratherium or something, though the Holstein cow paint job distracts me.

At any rate, enjoy.

Here he is, in all his faded glory

Yesterday was kind of busy, what with the broken bed (not for fun reasons, sadly), the entertaining but lengthy visit to the lumberyard, the minor crisis over life insurance, the school visit, and actually socializing with our visiting friend Ellen Eades. That meant I never had time to write a solid blog post for today. Likewise this morning, with early lab work at the clinic and a bunch of errands.

I will, however, have time this afternoon. So this is an 'Ask Me Anything' thread. Post your questions in comments, and I'll reply. If the question (or the reply) is particularly interesting, I'll probably promote them to a blog post later on. Writing, publishing, cancer, death, parenting, politics, etc. — give it a shot. The only thing I won't respond to is blatant trolling.

I look forward to hearing what you have to say.