Neil Gaiman: Why our future depends on libraries, reading and daydreaming — A lecture explaining why using our imaginations, and providing for others to use theirs, is an obligation for all citizens. (Via AH.)

The Meat Is Only the Start — Hungry City: Umami Burger in Greenwich Village. Mmm mmm. (Thanks to Dad.)

Popeye in Perspective — In the 1934 animated film "A Dream Walking" by the Fleischer Studios, Olive Oyl sleepwalks on a skyscraper's scaffolding, as Popeye and Bluto try to save her. It's a tour de force of perspective, switching effortlessly between one-, two-, and three-point perspective.

Could a Vaccine for PTSD Protect Soldiers?

Santa Fe Flyer: 1943 — Holy crap, this photo. I love industrial imagines, but an entire steam locomotive being hoisted through the air... wow…

Vast meteorite pulled from Russian lake, breaks up — It's half a ton big and it came from outer space. At least that's what Russian scientists say. Yet when they try to weigh it, it breaks into pieces.

“Thank You, Doctor. And Now, for the Opposing View, Here’s Joe Camel.” — And while it chaps my hide, stuff like this is what I expect from Heartland. What really gets me is that USA Today gave Heartland a place to confuse the public about global warming. If they ran a piece about satellites, would they get an “opposing view” from a Flat Earther? Global warming is no more a controversy than Young Earth Creationism. Only conservative political pressure keeps that question alive at all, that and the media's terror at being labelled liberal for reporting on what's really in the world.

Antarctic Sea Ice Reaches New Maximum Extent — And yes, this is an expected part of climate change, too.

The American Genocide Against Iraq: 4% of Population Dead as result of US sanctions, wars — Remember, kids, the Iraq War was a trillion dollar war-of-choice started on knowingly false pretenses by a Republican administration eager to be seen doing something about an attack on the United States which Iraq had nothing to do with. Plus maybe oil. And PNAC. Yet somehow people still imagine the GOP to be patriotic stewards of America's national interest.

The Radical Christian Right and the War on Government — Ah, Dominionism, that ultimate expression God's love as taught to us by smug, hateful Republican Jesus. (Via David Goldman.)

Scalia’s word problem — So true. Heh. The conservative mind is indeed a wonder to behold.

Thanks to the Shutdown, Republicans Are Losing Ground in Numerous Senate Races — We can only hope this will last. The country should be so lucky.

Nine things we missed during the shutdown — American conservatives are why can't have nice things in this country.

GOP: We can easily avoid default Thursday by not paying Social Security checks — Mmm. Compassionate conservatism. Are you proud of your Republican party?

Pro-shutdown SD ranchers upset shutdown means no federal aid for devastating blizzard — Ah, the vaunted intellectual consistency of American conservatism. As I keep saying, no one, especially not conservatives, likes conservative policies when applied to them personally.

Senate Debt Deal Screeches To Halt As U.S. Looks Over The Cliff — "We won't be the last political party to overplay our hand," he said. "It might happen one day on the Democratic side. And if it did, would Republicans, for the good of the country, kinda give a little? We really did go too far. We screwed up. But their response is making things worse, not better." What has happened in the last thirty years of politics that would lead anyone with a pulse to imagine that the Republicans would "kinda give a little" if they had the Democrats backed into a bad political corner? This is incredibly self-serving tripe from Senator Graham.

Republicans never demanded Obamacare repeal, says Republican who demanded 'getting rid of Obamacare' — Of course, the GOP's base of low-information voters will believe this flat out lie, and blame it all on Obama. But they always do.

The huge health-care subsidy everyone is ignoring — The political right has paralyzed government over the implementation of the Affordable Care Act, on the grounds that the ACA represents an unacceptable government intrusion into what today is the province of private markets. But the premise is fundamentally untrue. What? A cherished Republican talking point untrue? Not possible! (Via Slacktivist Fred Clark.)

?otD: What shade of pale did you turn? 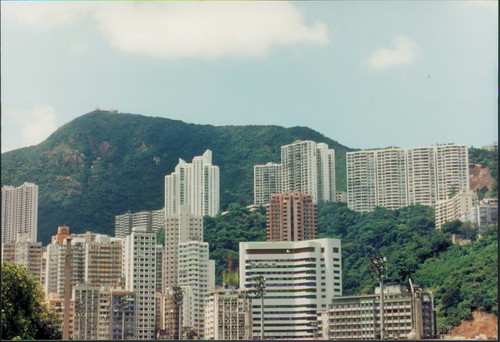 A few weeks ago, we drove down to Klamath Falls, OR for a long weekend. On the way down, we stopped at Detroit Lake, along with Santiam Highway. Lisa Costello took some photos.

So we apparently have a deal to defer the debt limit a month or two down the road and at least temporarily rescind the shutdown. And there was much rejoicing in the land.

I'm not sure what was accomplished here. The only thing that's really changed is a sop to the Republicans about tighter enforcement of the ACA's subsidy provisions. Since this represents a way of further pointlessly punishing the poor, ill and needy, it fits right in with the rest of the Republican party platform.

Meanwhile, I see absolutely no evidence that the Ted Cruz faction of the Senate GOP and the Tea Party faction in Congress aren't going to play exactly the same hostage-taking games in the upcoming budget rounds and debt limit deadline as they just did. In fact, quite the opposite: they're already threatening to do so.

What I've gleaned from the recent fracas is that there are no more 'reasonable Republicans'. Senators McCain, Graham, etc. could have stopped Senator Cruz any time they wanted by not supporting him in procedural votes. The Tea Party caucus in the House is something like 20% of the total Republican delegation, yet the majority-within-a-majority was helpless to deter their unprecedented brinksmanship.

And these 20 percenters somehow imagine that the American people will rise up and back them, if they can only get their message out successfully. They don't believe the polls showing Americans overwhelmingly opposing the shutdown and growing in their support of Obamacare, they don't believe the media reports. It's all a conspiracy to keep the truth away.

Remember how well that denial of media coverage and 'unskewing' of polls worked for the Romney campaign in 2012?

Neither does the House GOP.

They threw almost a million people out of work, did billions of dollars of damage to the economy, made the United States a worldwide laughingstock, all for a conservative temper tantrum about a law they don't like, and apparently to preserve Speaker Boehner's job.

And all of this mess for what? The successful implementation of a healthcare plan first proposed by far right think tank the Heritage Foundation? A healthcare plan first implemented by Republican governor Mitt Romney of Massachusetts, and widely considered highly successful? A law negotiated in the House and Senate incorporating hundreds of Republican amendments to address conservative concerns, gutting the progressive heart of the bill in favor of driving revenue to private sector health insurance carriers?

In other words, the Republicans were rising up against their own idea, implemented with their own advice and consent and thorough bipartisan negotiation, litigated before their own ideologically stacked Roberts Court, successfully implemented by a black Democrat.

Guess which part of that preceding paragraph is the real issue. As Senator McConnell flatly said in 2010, the GOP's top legislative priority during Obama's first term was to make him a one-term president. Not jobs. Not national security. Not the economy. No, their priority was limiting the success of a black Democrat.

Why would anyone think their priorities are different now? Allowing the ACA to succeed, no matter how deeply rooted it is in conservative ideals, brings political and historical credibility to President Obama.

And the GOP's insistence that the shutdown was Obama's fault because of his unreasonable refusal to negotiate doesn't even rise to the level of the laugh test. To anyone outside the conservative epistemological bubble, the hostage taking-dynamic is overwhelmingly obvious. Your Liberal Media has seriously confused the issue by pretending that this is a both-sides-do-it issue.

The worst part is, the GOP has gone so crazy that they are imperiling the full faith and credit of the United States government in international finance. There may already be long term damage. And by the GOP's own logic, any existing law they don't like can be protested by the same measure. These idiots could shut down the government in an attempt to defund the Environmental Protection Agency, or dismantle Social Security. American conservatives have proven they will hold the entire country hostage over settled law. What's to stop them from doing it again?

Bad enough that the party that wraps itself in the flag and the Constitution and angrily proclaims the supremacy of conservative patriotism destroyed our military reputation during the George W. Bush administration. Now they're hell-bent on destroying our economic dominance of the world, with a side order of collapse of our world-leading educational and scientific establishments. Strange behavior for a party that insists on America First!

Like I said, I've given up on 'reasonable Republicans.' All the nice, humane, thoughtful conservatives I know in real life are people who vote for the party of hostage taking, of destroying the economy and America's standing in the world, of the sheer, wall-eyed lunacy of Bachmann and Gohmert and DeMint and Cruz. Given that the crazies have taken over the party, after being invited into the tent these past years, anyone who votes Republican is part of the problem we have just seen on display.

The problem we will see come back with a vengeance in December, January and February as the new deadlines in the continuing resolution come to pass. Meanwhile, the sequester budget has become the new normal — a huge win for Republicans — while science is foundering and our international financial posture is collapsing.

All this from a bunch of patriots, who themselves are an ever-shrinking minority of American culture and politics. If the GOP can't win, it's clearly intent on taking the rest of us down with it.

And in a year, when the next round of Congressional elections is held, will anyone even remember this? No, most of Sarah Palin's "real Americans" will be out voting against the party that put a black man in the White House. And given the Democrat's temerity to win an election by the popular vote, on the merits of their positions, Obama and the rest of this country will pay and pay and pay for the angry conservative inability to accept that they have lost the culture and political wars.