Jade — A middling review of the French edition of my novel Green.

The Jay Wake Book is Complete — Hooray for Sandra Tayler, hero of the revolution!

Classic TV show maps - in pictures — At first the arrangements seem random, but with Monty Python's Flying Circus across the road from Fawlty Towers, and The Killing adjacent to The Bridge (and The Tunnel), this street map for TV addicts includes more than 700 television shows, linked by a multifarious set of connections. (Thanks to AH.)

What makes creativity tick? — While some believe creativity is spontaneous, Michigan State University neuroscientist Jeremy Gray suspects there's a lot of hard work going on in the brain even when the proverbial light bulb going off feels effortless. Like hell creativity is spontaneous. I mean, of course it can be, but any working creative professional can tell you that there’s a lot of discipline, structure and work involved. As a society, we have such odd notions about writers and artists. (Via David Goldman.)

100 Diagrams That Changed the World — A visual history of human sensemaking, from cave paintings to the world wide web. (Via Lisa Costello.)

10 of the world's most scenic cemeteries — A subject of some personal interest to me lately.

Sick mum 'belittled' by Air New Zealand — Wow, I thought Air New Zealand had treated me poorly, but this is just depraved. And an update here; apparently the airline has apologized, but the horribly discriminatory policy did and does exist, so it obviously seemed like a good idea to Air New Zealand right up until they were publicly embarrassed in the media. (Via .)

13 Horrifying Ways to Die (If You’re an Arthropod) — Fascinatingly weird images and story, but trigger warning if you’re icked out by insects, spiders, or nature red of tooth and claw. (Thanks, I think, to .)

A partial eclipse will bring a strange sunrise Sunday — Sunday morning, everyone on or near the Eastern Seaboard has a rare chance to watch an eerie celestial spectacle at sunrise. The sun will come up over the east horizon while in a partial solar eclipse. Instead of a golden ball, the sun will be a weird, upside-down thick crescent with, as seen from New England, a big bite missing from its lower right. That is, it will if the weather permits. I saw the total eclipse in 1991 with a completely clear sky. It was amazing.

Slow-moving zombie technologies that refuse to die — Just when you think they're obsolete, they rise from your desk and bite.

Climate Change Seen Posing Risk to Food Supplies — Another day, another liberal lie. Thank God for Rush Limbaugh and the Republican party, or we might actually have to worry about this stuff.

What's the greatest threat to economic growth? It's climate change. — Amazing, the lengths liberals will go to for their hoax. Even to maybe crashing the world economy.

Another Obamacare horror story debunked — Huh. A conservative talking point that turns out not to be true. Who could possibly imagine a Republican bearing false witness about healthcare? (Via Davis Goldman.)

SecDef orders 9 rogue red-state National Guards to recognize spouses of gay US troops — Conservatives just can’t help themselves. They have to hurt somebody to feel good. I’m only amazed that there’s meaningful pushback on this particular bit of Republican bigotry.

Neo-Bircher apocalyptic politics harms the people who embrace it — Our politics is hobbled by a determined, motivated, vindictive bloc of voters driven by fear, ignorance and resentment of the Other. That’s a problem for all of us and it’s a big reason why we can’t have nice things. It does real harm and causes real pain to those it demonizes and targets — usually vulnerable outsiders and poor people. Yes, this. They’re called conservatives.

?otD: Who are you helping today? 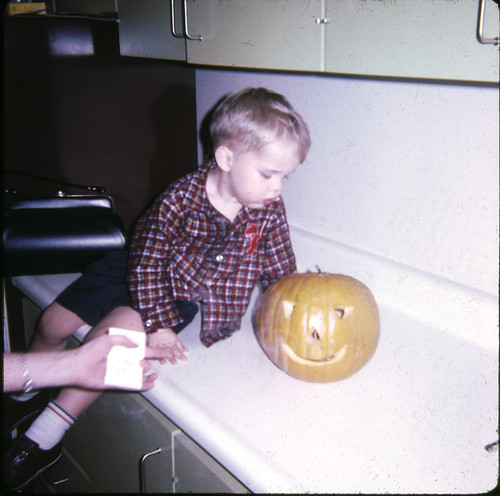 Lisa Costello and I recently visited ceramic artist Beverly Toyu at her studio in Dayton, Oregon. We were both absolutely croggled at what we found there — hundreds of ceramic life masks and molds. It was beautiful and strange and more than a little unsettling. Neither of us had come prepared for serious photography, but with Beverly’s permission, I took some shots on the iPhone. 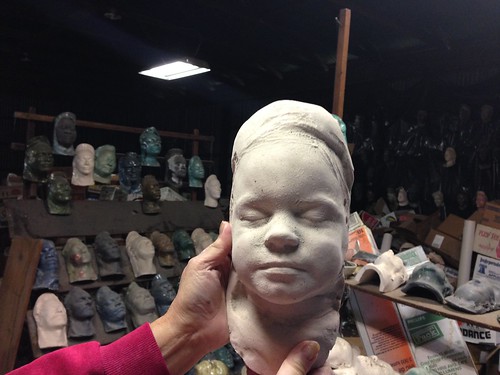 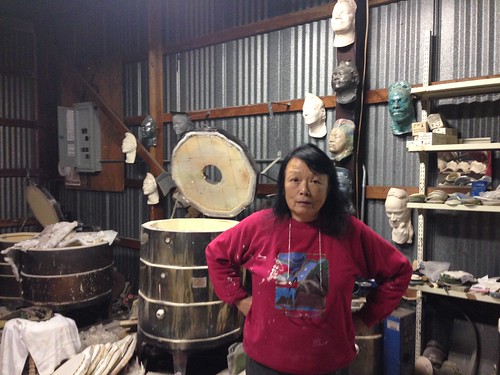 As I have recently complained, I am growing more affected by the Regorafenib. Hair loss, skin conditions, easier wounding, slower healing, localized infections of minor wounds, and so forth. It's also been the case in this cycle that the GI effects have grown worse.

Simply considering time spent on the toilet, this was my worst GI day ever. Worse even than on the various intravenous chemotherapy regimens I have spent the last four years enjoying.

I have two different medications I can take to slow or stop this. But I'd spent the previous two days on those medications, bottling myself up so I could make the trip to Maryland. I cannot take them continuously or I become horrendously, painfully constipated. Plus, well, the stuff has to come out somehow, at some point.

So I hid in our hotel room yesterday and struggled with violent cramps, sometimes three or four times per hour.

This is gradually growing more and more difficult to tolerate. Given that my alternative is a fairly quick death, everything I'm experiencing is just the cost of doing the business of life. But it's making me weaker, more tired, and more physically stressed.