How doctors die — When it comes to dying, doctors, of course, are ultimately no different from the rest of us. And their emotional and physical struggles are surely every bit as wrenching. But they have a clear advantage over many of us. They have seen death up close. They understand their choices, and they have access to the best that medicine has to offer. (Snurched from Steve Buchheit.)

Death, and Death in Science Fiction and Fantasy

Star Wars: R2-D2 to appear in next movie outing — Beep.

The 400-year-old love letter and the mummy

One Woman’s Struggle to Re-Use Her Penis Cake Pan — Hahahahahahah. (Via Lisa Costello.)

Men: we can start a movement to stop violence against women — By challenging male conformity, we put the onus of ending abuse against women where it belongs – with men who perpetrate it. (Via .)

Tired of Hearing about Obamacare? Turn Off Fox. — Ah, Your Liberal Media.

The Party of Zilch — The Republican Party stands for nothing. As Barack Obama threatens to fumble away his presidency along with the Democratic Party's reasons for existence—championing an active, efficient government—the GOP lurches into the leadership breach with … zilch. Rather than be the party of solutions in a gridlocked capital, appealing to a leadership-starved public, the GOP is the party of obstruction, ensuring that its putrid approval ratings nose-dive apace with Obama’s. The GOP has been obsessed with negative agendas since at least the days of Newt Gingrich being Speaker of the House. Why is this news now?

'Willful Perversion' — A former Republican Senate staffer on the change in the filibuster rules.

McConnell: For going nuclear before he was against it — In two sentences 2005 McConnell destroys all of 2013 McConnell's arguments. Just like that. What a difference a Democratic president makes. Ah, the much vaunted principled consistency of conservatives is on display yet again. 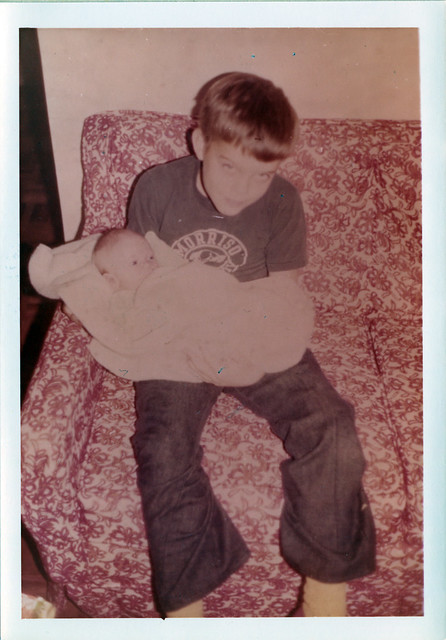 Me with my new-born brother. Photo © 1973, J. Lake. Reproduced with permission.

The topic de la semaine hereabouts has been my funeral planning. Contemplating one's own final arrangements is a subject sure to brighten any day.

I get hung up on a couple of points as I walk through all this. One, the whole discussion just makes me want to cry. Two, what is the proper balance between my desires and the needs and desires of those closest to me?

The first I just deal with. So much of my life is devastating these days, what's one more incitement to grief?

The second I think I have a solution for, at least in my context. We're probably going to have a small, private set of observances at my time of death and shortly thereafter, probably to be led by Mother of the Child's Buddhist pastor.

Sometime a bit later on, a larger, public memorial service for my extended family, friends, fans and whoever wants to show up, will likely be led by Ken. That will be the last JayCon and/or the second JayWake, depending on how one wishes to look at it.

For the most part, my own desires are nebulous. In simplest terms, I won't be here to care. But I am very mindful of how the rituals of my death affect the grieving processes of , her mother, Lisa Costello, and the rest of my family and friends. At the same time, it would be the height of hypocrisy for my cooling corpse (well, cooling ashes really) to be sanctified in a religious framework. Can I be a hypocrite when I'm dead?

There's all kinds of details: Scattering the ashes? Memorial diamonds? What plaque and where? Much of this will be handled in a series of meetings next Monday.

I do know what I want for the epitaph on my marker. It comes down to a choice between two different things I wrote in Kalimpura.

"What are years to me? Like pain, they pass unnoticed."

The first is more obscure but pointed. The second is more universal but borders on the cliched. Neither can sum up my life, any more than any epitaph ever can for anyone. The dying process itself sums up one's life.