3 to 3: Orycon 2013 interview with Jay Lake — In which Camille Alexa interviews me.

The Church of the Brass Messiah — Hah!

Amazon to deliver by drone? Don't believe the hype — Jeff Bezos's 'plan' for drone deliveries is little more than a publicity stunt – timed for the biggest online shopping day of the year.

Compulsory Monogamy in The Hunger Games — This story has it right. A polyamorous solution, logical and satisfying as it might be, would never have made it on to the pages of the book or into the film.

Robot Handjobs Are The Future, And The Future Is Coming — Uh, yeah. (Thanks, I think, to David Goldman.)

Evangelical historian remains key ally of right — More on the profound and knowing intellectual dishonesty of America’s Evangelical Right. That whole not bearing false witness thing in the Bible? It’s one of the optional Ten Commandments. Lying for Jesus is never a sin, I guess. (Via Slacktivist Fred Clark.)

Dozens of same-sex couples wed in Hawaii as new law takes effect — Another bigotry domino fallen. Just for reference, have any of the Right’s apocalyptic predictions for gay marriage (and repeal of DADT) come true? Even remotely? Anywhere? Not that there is ever any accountability whatsoever for conservative hysteria, but still.

Since rich people don't create jobs, why are conservatives taken seriously on economics? — This isn't he-said-she-said economic theory. This is known fact, demonstrable time and again through empirical evidence just like evolution or climate science. Since when have facts ever stood in the way of a conservative position? It’s an entire ideology founded on explicit rejection of reality. In their own words conservatives have made it clear they have no interest in evidence-based thinking, except when it supports their interests.

?otD: Was your father a man of wealth and power whom everyone obeyed? 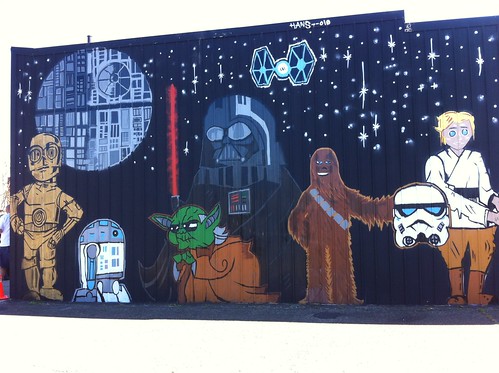 Still feeling pretty loopy from this low grade bug. Very much in a state of anticipation this week, and not in the fun way. I'm currently scheduled to fly to Omaha Wednesday for one last round of visiting with my many friends and colleagues there. I'm pretty sure this trip will happen, at least at the front end. Waiting to hear back from various clinical trial sources about my next moves there (NIH and elsewhere). Any of those phone calls and emails could trigger an intake visit at their convenience. Plus I have to sign my updated will and estate planning documents this Wednesday, right before I head for the airport.

Various friends want to come visit. I've been reluctantly putting everyone off for the sake of sorting out some of this healthcare stuff. It's leaving me slightly testy, but I don't see much point in firming plans which are more likely to fall over than not. At the same, in putting people off I'm putting off things I want to do while I'm in relative good health.

So, yeah. Grumble grumble. I'm alive today, I should be grateful. But sometimes I feel like I inhabit the bottom of a deep well of logistics, and it's all shifting shadows and angles of the light down here.