Cats Recognize Their Owner’s Voice But Chose to Ignore It — Hahaha.

An Artificial Hand with Real Feelings — A new nerve interface can simulate a sense of touch from 20 spots on a prosthetic hand.

Could dark matter be hiding in plain sight in existing experiments? — Particles called axions could be creating noise in superconducting devices.

Wonders in the Antarctic Sea and Sky — Mmm. NASA photos.

Your questions about the new IPCC climate change report answered — Mmm, science. Always with the new questions, never with the final answers.

Katie Couric Gives Anti-Vaccine Ideas a Shot — The real problem with this entire segment on the “Katie” show was the false balance: The idea that there are two sides to this story. That is grossly unfair; the evidence is vastly on the side of the vaccine having extremely little risk, and no solid evidence at all that it causes harm. It’s not as though the research on this is split. Welcome to the world of Your Liberal Media, where ridiculous and harmful fairy tales without any evidence-based support, such evolution denial, climate change denial, supply side economics and the Republican party platform, are all treated with respect in the name of balance. It is the shame of liberal America that the same erratic thinking and willful ignorance that so profoundly characterizes almost all conservative “thought” is legitimized through the fixation on vaccination. We don’t even have the excuse of a consciously reality-denying ideology to stand behind.

Church Sign Epic Fails, “Rapture Hatch” Edition — I’ve written fiction that touches on this issue. That anyone, anywhere, can take this literally is a sad, sad comment on the human condition. (Via Slacktivist Fred Clark.)

Pope Forms Commission to Advise on Sex Abuse — It remains unclear if the experts will take up one of the core issues behind the Catholic Church’s sex abuse scandal: how to make bishops who shelter abusive priests accountable. Therein lies the rub. This is a step in the right direction, but it will do nothing to restore the Church’s moral standing until the princes of the church who sit so righteously comfortable in their gilded chairs are held accountable for the long decades of sheltering of abusers and persecution of the abused in the name of protecting their institution.

Was John Wayne a draft dodger? — Typical conservative, all for sending other people’s kids out to die without ever having put themselves on the line.

GOP: No Climate Change because, Bible — In any sane and civil society, this would be a risible Onion story. In conservative America, it’s business as usual. Sigh.

GOP intolerance: “It’s part of their political DNA” — That’s putting it mildly. But when a political party bases their entire political fortunes on generating angry white guys, what the hell else do you expect? 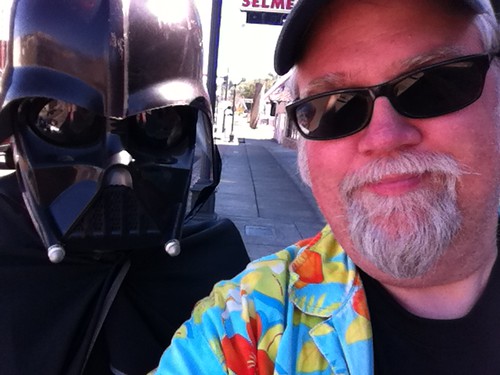 Self-portrait with a friend, Star Wars Shop in Aberdeen, WA.

I'm in Omaha, where it is currently 10 degrees outside. Because reasons.

Due to travel (which went fairly well, minus a few bobbles) I did not get to sleep until a little after midnight last night. Even allowing for the two-hour time difference between Pacific and Central, this is staggeringly late for me. It is probably no coincidence that I slept solidly for nine and a half hours.

The downside of that is due to a lunch date with a friend, my morning has been very rushed and out of sorts, where I'd expected to move slow and fly low today. Hence also the late blogging.

The Omaha Beach Party meets tonight at 6 pm at Zio's on Dodge. If you're within striking distance of Omaha and would like to see me, feel free to drop by. It will be a bunch of writers and friends eating pizza and yakking for a couple of hours.

Meanwhile, being here is bringing a bunch of my mortality thoughts hurtling back to the surface. I've spent the years from 1999 to 2013 working jobs either based in Omaha or with a strong connection to Omaha. I've visited this city at least a hundred times, literally so — that's not hyperbole, that's 8-14 trips a year across most of those 14 years. Omaha represents one of this big parts of my life that has already sloughed away in the face of cancer's mortal decline.

Still, weather and ruminations notwithstanding, I am happy to be here. I will see my old work friends, and spend the weekend with some of my dearest friends in the world. That is a goodness.

Back to Portland on Monday, and a medical appointment on Tuesday regarding one of my possible avenues for a clinical trial. No rest for the weary. (Well, except that long night's sleep.)

See some, all or none of you tonight.