Civilization and Its Stoplights — Interesting. I have found myself falling on both sides of this question over the years.

Simulations back up theory that Universe is a hologram — A ten-dimensional theory of gravity makes the same predictions as standard quantum physics in fewer dimensions. (Snurched from Steve Buchheit.)

We’re Still Losing Ice at the Poles — I’ll note that some people who deny global warming like to talk about ice in Antarctica increasing, not decreasing. This is at best misleading; the sea ice fluctuates every year, and has grown marginally recently, but this is tiny compared to the loss of land ice. Overall, Antarctica is losing ice, rapidly, with more melting every year.

Okay, I Thought People Were Using "Affluenza" as a Joke — Ah, the majesty of the law.

The Real Face Of Jesus — Advances in forensic science reveal the most famous face in history. Ah yup. An oldie but a goodie. Thank God smug Republican Jesus doesn’t look like this at all! (Via .)

Mom shot while taking gun from toddler — No patriotic American could possibly draw a conclusion about gun safety or parenting fitness from this incident. After all, the child was merely standing his ground and exercising his Second Amendment right to theoretical defense of essential liberties as part of a well-ordered militia.

?otD: What did you dream last night? 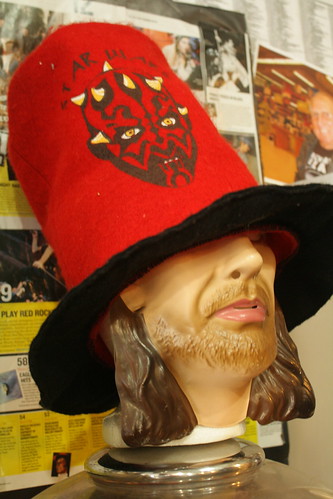 Hat of my dreams, the Star Wars Shop in Aberdeen, WA.

In the past week, I have managed to see both Frozen [ imdb ] and The Hobbit: The Desolation of Smaug [ imdb ].

Frozen: Does for Nordic culture what Brave did for Celtic culture.

The Hobbit: The Desolation of Smaug: The Starship Troopers of fantasy movies. A feature film made from 2.5 chapters of a completely different book. Fun, though.

Unlike almost every other recent animated film nominally targeted at the children's demographic, Frozen really did not have an adult layer. A handful of specific jokes and lyrics, perhaps, but that's about it. This film relentlessly targets the 'Disney Princess' demographic. Also, as pointed out to me, it was clearly written to become a Broadway show. The first half of the movie is almost nothing but show tunes numbers, and the voice cast are largely Broadway stars. As a movie-goer, I resent this with the same low-grade irritation that I resent movie scenes clearly intended to fuel the forthcoming video game. I want to watch a movie that was intended to make sense as a movie, not go see part of a multimedia, multichannel marketing vehicle.

As for The Hobbit: The Desolation of Smaug, yay Peter Jackson for having the money and the sponsorship to make eight or nine hours of Lord of the Rings fanfic. When I think about the book, these movies are such an utter waste of potential. (This is very nearly the opposite of my feelings about Jackson's Lord of the Rings films, mind you.) When I take them on their own terms, these movies are more entertaining than that complaint implies, though the second one is much better than the first. And it's mildly weird to see Legolas look decidedly middle-aged after his youthful appearance in a movie set decades later. You'd think Weta could have done something about that. Otherwise, I stand by my capsule review. This one is fun if you leave your memory of the book at home.

Last night I dreamt something long and complex, which is now lost to me. However, at the end of it, I was in a coffee house on a college campus somewhere. It was indoors, part of a student union building or some such. The students around me were of various ages, and one or two had small children with them.

I'd been drinking hot chocolate and reading. It came time to leave so I began to pack up. As I wound my scarf around my neck, my hat fell off. When I bent to pick up my hat, my gloves slipped out of my coat pocket. I couldn't fit all my stuff into my pack. And so on.

Around me the coffee house was closing up. As people left, they kept dropping things too. I started trying to collect the other lost belongings in the hopes of returning them. The barista was pushing the tables to the back and stacking them so she could mop the floor. My table disappeared, and most of my stuff with it. I kept running around desperately trying to retrieve everything. I only succeeded in dropping more and more of what was in my arms, most of it not even mine.

It doesn't take a psychology degree to work out the meaning of that. No more than most of my dreams. And this has been my week. If there is no significant crisis or disaster in my life today, it will be the first day since last Sunday for which that has been true. I have rushed from one problem to the next, solving few of them, and seeing most of them generate more problems like a runaway software process spawning malign threads.

Such is my life these days. This week has been an unusually pointed example. But in all seriousness, Lisa Costello estimated recently that based on the experience of the past few months, even on my best weeks I cannot get any three days in a row without something overwhelming happening.

This distraction factor spills over into everything. Ever since the cancelled trip to Europe, I have been unable to schedule social time with friends. The big stuff is more obvious — because my medical schedule keeps shifting so randomly, I cannot make commitments to out-of-town friends who need lead time to arrange work vacation days and procure plane tickets. Less stringently, I can't even commit to Seattle friends who can be more flexible because they're driving or taking the train or the Bolt Bus.

But even the local stuff gets killed. I'm going to Maryland at the end of the month to see about two different clinical trials at the National Institutes of Health. That means I won't be here for my December 31st appointment with my palliative care doctor. They're impossible to see on short notice, so I had to take a reschedule for Monday, December 16th. Exactly when I had a midday date with Jersey Girl in Portland. Her daily/weekly schedule and mine are so misaligned even normally that when I have to cancel with her, it can take us weeks to reschedule.

I can't keep up with anything anymore, not with the absolute priority of maintaining what's left of my life and health, and the resultant very erratic and frequent scheduling demands of that process. So my out of town friends slowly stop offering to come see me because I can never commit to a time. Most days I'm too rushed and fuddled to even be smart about keeping up emails or texts or phone calls whatever, so it's harder and harder to maintain my relationships even remotely. My local friends get used to me cancelling and being unable to reschedule easily. My life narrows a bit more week by week, as it does in so many other ways.

My attention span degrades, my social availability degrades, and instead I am trapped in a whirling morass of urgency. I hate this.