The Devil is Due in Dreary — An interesting project that Donnie Reynolds brought to my attention. Go pick one up for your gift giving list or your own reading pleasure.

The creepy art of Zdzisław-Beksiński

Artist Creates Elaborate Non-Photoshopped Scenes in Her Small Studio — This is pretty darned cool. (Via .)

Why We Sing "Fa La La" Instead of "Fra Spla Spla"

Is our Media Screwing us on Climate the Way it Did on Iraq? — Duh. Your Liberal Media constantly pretends that politically motivated transparent lies from well-funded conservatives constitute a legitimate challenge to overwhelming scientific consensus. Next question?

Why are Christian Militias never "Christian Extremists"? — Because of the absolute privileging of Christianity in American society. Despite the self-valorizing paranoias of many American Christianists, Your Liberal Media endlessly honors the overwhelming cultural dominance of their religion. Next question?

Pope: I knew good Marxists; label doesn’t hurt me — Come on, that’s a little hard on smug Republican Jesus, who stands for truth, justice and the American way. Just like it says in the Bible.

The real tragedy of America's gun violence — In the aftermath of its own Newtown-like massacre, Australia changed its gun laws. The result? Homicides and suicides plummeted in the decade that followed. Of course, like all real world problems, the link between guns and violence is a complex issue. But one rarely has so much evidence pointing in the same direction. Yup. And Australia’s undeniable success at protecting its citizens by disarming itself is something you will never, ever hear any conservative politician, media outlet or voter admit to. Here in America, 30,000 deaths a year are essential for the illusion of safety that gun owners enjoy. Ask any conservative: your risk of death is a small price for them to pay for their Second Amendment rights.

Kelly: Outrage Over 'White' Santa Comment Was 'Race-Bait' — Fox News host Megyn Kelly insisted Friday that her earlier comment that Santa Claus was "just white," which invited significant backlash, had been a joke -- and that her critics were just looking for an excuse to call her a racist. Ah, the old "I was just kidding" defense so beloved of racists and sexists everywhere.

Bipartisan Hypocrisy — Ezra Klein wonders how Republicans can be such hypocrites about health care when Obamacare turns out to be exactly what they wanted all along. Um, hello? They are Republicans? Is anyone who isn’t a conservative true believer surprised by this? It’s part of the GOP’s absolute fixation with bearing false witness against liberal-progressives and all their works. Especially the Kenyan Muslim socialist usurper. 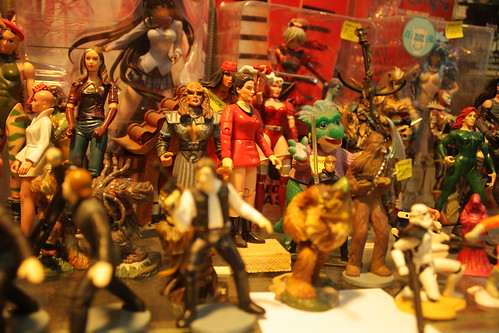 Hail, hail, the gang’s all here at the Star Wars Shop in Aberdeen, WA.

Two more movies we've seen for the first time recently are Monsters University [ imdb ] and Thor: The Dark World [ imdb ]. These have both been in release long enough that I'm not going to worry about spoilers, though I'm not deliberately planning any, either.

If you liked Monsters, Inc., you'll probably like Monsters University. If you didn't see or care for the first movie, there's not much reason to see the second. It's a competent followup, though a prequel rather than a sequel within continuity. The usual Pixar charm applies, though perhaps not so much as in some of their other franchises. Likewise the usual Pixar production values apply, which is always fun if you, like me, enjoy that sort of thing. Since I didn't see it in the theater I bought the Blu-Ray to go with my Monsters, Inc. DVD. I'm not sorry I did, but I would describe this as satisfying and entertaining without the depth of some of the stronger movies in the Pixar oeuvre. On the plus side, it doesn't suffer from whatever horrible rot afflicted Cars 2, either.

If you liked Thor in his other recent Marvel film incarnations, you'll probably like Thor: The Dark World. Witty banter, bombastic music, existential threats to the nine worlds, Natalie Portman, lots of punching and exploding. What's not to like, if that's your sort of thing? It's certainly mine, or can be. The best thing in the film was the twenty seconds or so where Loki turns into Captain America while haranguing his brother about his life choices. The fact that's the best thing in the film probably tells you everything else you need to know. (Caveat: if male physiques draw your eye and libido, that might be the second best thing in the film after the brief scene of Chris Hemsworth wiping the sweat of valor from his chiseled form.)

In other words, both movies nicely met my expectations as sequelae to their respective franchises, without surprising me or delighting me in any unanticipated ways. Which from contemporary Hollywood is something of a win.

Well, yesterday did not pass without incident, despite my hopes, but it ended well enough. Today we are all being low-key. Tomorrow, more funeral planning, so you can imagine how my head will be at that point.

Have a good rest-of-the-weekend your own self, assuming this is your weekend.