Skip the Supplements — I can tell from long experience as a cancer patient being treated with chemotherapy, all those ‘natural’ supplements can be a real problem. Many of the things people take thinking to protect their body can also protect the cancer from the effects of chemotherapy, for example. Good luck figuring that out by talking to anyone in the alternative medicine community. (Thanks to David Goldman.)

When Cowboys Wore Pink — The gendering of color.

Thinking in Silicon — A new breed of computer chips that operate more like the brain may be about to narrow the gulf between artificial and natural computation—between circuits that crunch through logical operations at blistering speed and a mechanism honed by evolution to process and act on sensory input from the real world. Advances in neuroscience and chip technology have made it practical to build devices that, on a small scale at least, process data the way a mammalian brain does.

Kentucky Doctor Reason For Closing -- Because Of Bush Initiative, NOT Obamacare. The Real Story — But the problem is deeper than just fraudulent story about lying doctor in Kentucky. The real problem is with not only the conservatives who put aside any, and all facts that they don’t like, but the problem also lies with the progressive media that fail to do the research to debunk these completely bogus claims. Your Liberal Media, enabling the mendacious conservative narrative since forever. (Thanks to David Goldman.)

Republicans, food stamps, and the permanent underclass — An insightful commentary on the deeper rationale of the Right’s endless persecution of the poor and the unlucky.

Republican answers for a young urban Latino — This is the problem for Republicans. They've bought into the idea that the conservative ascendancy took root because of the power of their actual ideas, rather than because they combined 1% money with the prejudices of a slim majority of the white middle class against their poorer, browner brethren. Republican "ideas" have absolutely no appeal for young people, and particularly not for young people of color. Really, Republican “ideas” have no appeal for anyone who’s not already a true believer. If you’re anything other than one of the GOP’s much cherished Angry White Guys, those Republican “ideas” fall somewhere between a pathetic joke and a criminal act. If you’re someone who likes a little evidence-based reality with your ideology, most Republican “ideas” don’t even rise to the level of a pathetic joke. 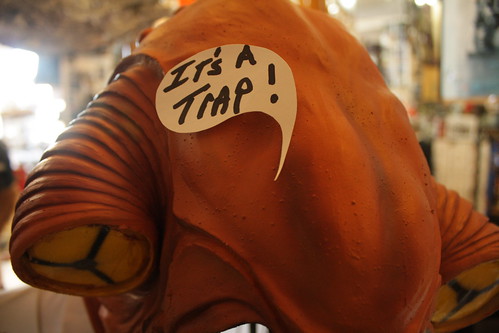 “It’s a trap.” The Star Wars Shop in Aberdeen, WA.

This week includes an appointment with my palliative care doctor, my usual weekly therapy appointment, an appointment at the funeral home to negotiate the contract for my final arrangements, two medical appointments for a family member which I shall be attending, another string of phone calls regarding our efforts to engage a clinical trial at NIH, significant travel planning for that trip, an effort to reconstruct my Quicken data due to a file error sometime back, plus all the usual business of life. Plus whatever crises du jour emanate as the week unfolds. Because there is always another fucking crisis.

Really, it doesn't slow down much. I'm tired already, and this is only Monday morning.