Hobbit's Gollum Lacked Precioussss Vitamins — An offbeat study, released on Sunday, which concludes that the evil characters in J.R.R. Tolkien's "The Hobbit" lost their battle against men, elves and dwarves because they suffered from vitamin deficiency. Uh… Rickets. Yeah. (Via David Goldman.)

Every argument you'll ever need for singular 'they' — Not being a prescriptivist myself, and often in need of a gender-neutral third person singular pronoun in my own discourse, I am completely comfortable with the singular ‘they’. Which means I probably need to get off some peoples’ lawns.

Largest and Fastest to the Orient — I love this vintage travel poster.

Too Much Information — Are we prepared to know the genetic flaws of the unborn?

Perfect enforcement: On the ground in the red light camera wars

The Sixth Mass Extinction: Why Climate Scientists’ Hair is on Fire

?otD: Are the words of the prophets written on the subway walls? 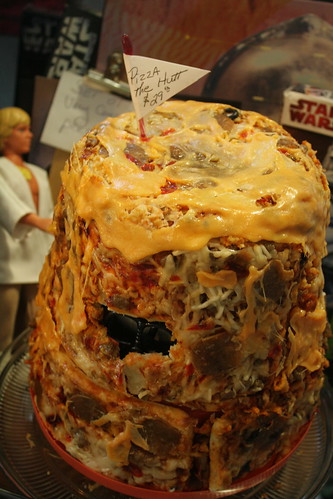 Pizza the Hutt. The Star Wars Shop in Aberdeen, WA.

Interval enlargement of nearly all of the pulmonary and hepaJc metastases.

That’s doctor speak for “some of these tumors have almost doubled in size in the last six weeks, and a few of them have grown so much they’re fusing together.”

Nothing whatsoever surprising about this, but it is discouraging as hell.

Yesterday was very much the far side of nuts.

No, there is too much. Let me sum up.

While I was in therapy yesterday morning, one of my National Institutes of Health contacts called, a research nurse who’s handling study recruitment. They left me a voicemail saying the Principal Investigator on one of the studies I am interested in would accept a CT scan from from my treating hospital within the last 30 days in lieu of trying to schedule a CT at the NIH facility on my arrival. (Grudgingly so, I gather.)

I knew I had an active CT scan order in the system at my treating hospital. The original intention of this order was for me to have my two-month screen in January — we’d been proactive about getting into the system. So after thinking this through, I called my treating hospital. I found out that my oncologist is on vacation next week. If I wanted the scan done and released to me in order to get a copy to send to NIH, it had to be done right away. Otherwise it would get stuck in my oncologist’s queue during their absence, and be of no use to me in my current timeframe. I wound up talking to Radiology scheduling, who said they could take me immediately if I could get there right away. (As it happened, in the course of this conversation I was driving north on I-5 very near the facility. Yes, I was using a headset.)

I cancelled my already-rescheduled lunch date with Jersey Girl in Portland and popped by to have the CT scan on a right-then basis. Afterwards, I went upstairs to Oncology and politely asked about having a stat read request put on the scan. I was also trying to figure out how to cue my oncologist to release the scan to me as soon as possible, as they do not have clinic hours on Tuesday. The team at the Oncology unit told me to call back into the triage line an hour or two after lunch and see about getting a message to my doctor.

I then spoke to the NIH nurse, telling them I'd gotten the CT done on-demand and was hoping for the results to be released that same day so I could get a disc from my treating hospital’s Imaging Library and express it to them. A rather hilarious conversation ensued.

NIH Nurse: "My jaw is on my desk. You are the most self-directed patient I've ever dealt with."

They also asked me if I could get a brain MRI to check for mets that might have crossed the blood-brain barrier. This is quite rare in my type of cancer, but it is possible. I told them I was dubious about getting that ordered here in Portland, and we agreed they’d schedule the brain MRI at NIH, probably for the afternoon of 12/30.

I got the appropriate NIH shipping address for delivery of the Imaging Library disc, then focused on contacting the clinic about getting my oncologist engaged to review the new CT scan and release it to me ASAP.

As it happens, my oncologist had already seen and released the scan promptly, even before I had reached out about having them read it. They emailed me and asked me why I'd had the scan early, was it for the NIH studies? I replied that it was, and mentioned the brain MRI request. Meanwhile, the Imaging Library was cooperative about releasing a disc to me immediately. They only needed a 45-minute lead time. So Lisa Costello took me back over to the hospital complex to score the disc.

About then, my oncologist went ahead and ordered the brain MRI. (All of this was happening more or less in realtime at this point, while Lisa drove us back to to the hospital to go up the hill to the Imaging Library.) I got on the phone once more with the schedulers, who actually found me an opening this coming night. It’s awfully hard to get an MRI on demand, as there’s a long waiting list for access. I have a 9:45 pm brain MRI up the hill in the main hospital, which should take about 45 minutes. There is a stat read request on that order as well.

My oncologist has agreed to watch their queue Thursday morning, and release the MRI results to me ASAP. I will then make the request to the Imaging Library and get it back out to my contact at NIH that same day for Friday delivery, if my luck holds.

This should improve the intake process at NIH as they will have everything they need to proceed, or to scrub me from the study if they don't like something in the imaging files.

By the time I got home again yesterday evening, I was so exhausted I physically hurt. I was also having at attack of the chills, which may have been exhaustion, a reaction to the CT dye, a system issue stemming from my advancing cancer, or all of the above.

As said, I was blasting through the walls with my ray gun. Not sure I've ever dealt with medicine in realtime on a non-emergency basis.

I want to note, with respect to my recent comments about constant crisis and never being able to hold a schedule, that yesterday was a perfect example. I’ve now had to reschedule Jersey Girl twice due to unexpected medical requirements. I spent most of yesterday on the phone, running around town, or actually in a procedure room, on a day that had no medical activity on my calendar when I woke up other than my therapy appointment. I’d actually thought to have an easy day.

This is how my life works lately.

As for the substance of yesterday, while I feel pretty darned accomplished, I also recognize that all of these victories are fundamentally futile. The CT results were frankly quite depressing. We’re fighting rearguard actions in a war the outcome of which was confirmed last spring. This does not stop me from grabbing every chance I can, wringing what I may from each passing day. But last night when I was in bed shivering under extra blankets and feeling logy and strange, I kept wondering if all this was worth it.

So far the answer is still yes.