Yes, I am fine. (People always ask when I don't blog.) Up hours after my bedtime with the late evening brain MRI, and thus slept late this morning.

Also, I have to pop out shortly to a funeral home meeting about my cremation and memorial contract.

The Hobbit: The Desolation of Tolkien — Daniel Larison is very unhappy with Peter Jackson. I pretty much agree with his points, though I am perhaps less vociferous in my articulation thereof.

Just in time for Santa!

Taxidermy mouse chess set — For all your gift giving needs. (Via , a/k/a my sister.)

DNA from Neanderthal toe links ancestors to inbreeding — Headline of the week.

The Big Squeeze — What happens if you crush an organic substance between diamond anvils? Researchers are finding out, with ramifications for our knowledge of Earth's core. (Via my Dad.)

A quantum revolution against Feynman diagrams — We all love Richard Feynman, but his diagrams may have to go.

The Gangs of Chicago — Ta-Nehisi Coates about being black on the street. Sigh,

Tolerating Christians — There’s a persistent, pernicious sentiment from certain Christian conservatives that they’re being persecuted or oppressed for their religious beliefs. It’s a very comforting and self-valorizing perspective that doesn’t need to be rooted in reality to feel real to the people who hold. Rather like pretty much every conservative position I could name. (Via Slacktivist Fred Clark.)

Pope Francis and the Naked Christ

Good Grief and Great Tits” Sitting Down to Read Sarah Palin's Christmas Book While I Bake Christmas Cookies for My Family — Modern conservatives have made "merry Christmas" toxic by associating it with Christian fundamentalism, religious intolerance, and the politics of imagined persecution. Yep. This exactly. I never say it any more, because I don’t want someone to accidentally think I’m a Christianist asshole. Unlike so many Bible-believing Christian conservatives, I actually think it’s important to love my neighbor rather than hate them. (Thanks to Lisa Costello.)

Hobby Lobby is fine with forced abortions and mandatory contraception in China, but balks at voluntary contraception for American women — To which I say, which part of “religious conservative” do you not understand? The term is literally and irretrievably synonymous with sanctimonious hypocrisy. Smug Republican Jesus wouldn’t have it any other way, after all.

My abstinence-only education — I was 17 before I found an adult who told me the simple truth about sex. Until then, I heard some crazy things. But abstinence education makes smug Republican Jesus smile! And that's way more important than protecting and enabling our kids to live in the reality-based world. (Via Slacktivist Fred Clark.)

Is Edward Snowden a modern Martin Luther? — There’s an angle I never thought of.

GOP Rep Hartzler has flag moved so that it blocks Obama portrait — Now imagine if you will for a moment the reaction if some moderate Democrat had done such a thing during the Bush administration. I mean, I know hypocrisy is more natural to conservatives than breathing, but just think about the firestorm in Your Liberal Media. Versus this chuckling little story.

The death of the American Dream in a single image — Burgeoning income inequality, shrinking social mobility. All a very logical outcome of decades of Republican economy policy. We’re living in conservative paradise. 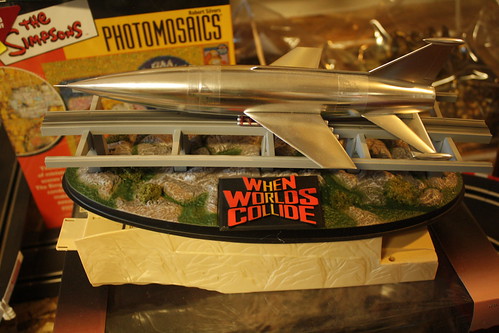 Other stuff, the Star Wars Shop in Aberdeen, WA.

So far today, the funeral home meeting ran an hour overtime, one full blown crisis developed while I was in there, and another crisis is in the making right now. More blogging tomorrow, if I can get out from under all the falling rocks.

On the plus side, I now have a cremation contract.