In which our collaborate novel Our Lady of the Islands, written by me and Shannon Page, finds a home

Jade par Jay Lake — A French review of the French translation of my book Green. Some complaints, but I interpret the Google Translate version as generally positive.

Textopornographie: France creates its own word for 'sexting' — Of course they did. (Via Daily Idioms, Annotated.)

Party Down: 100 Years of the Crossword Puzzle

Federal judge strikes down Utah’s ban on same-sex marriage — Wow. I would have bet good money that either Utah or Nebraska would the last stand of religious bigotry in this country when it comes to persecuting gays. This is beyond shocking.

New Jersey Senate Passes Transgender Birth Certificate Bill — Earlier this week, The Advocate reported on the status of a bill intended to make the often-difficult and cost-prohibitive process of updating identification documents easier for transgender individuals in New Jersey. This in the state that elected Chris Christie as governor? Wow…

Phil Robertson's America — The Duck Dynasty star's warped vision of civil-rights history feeds his warped view of today's gay-rights struggle. Ta-Nehisi Coates with some perspective that should shame any white person, regardless of your politics.

Is the “War on Christmas” about Christmas? — For these commenters, the so-called War on Christmas is about much more than a competition between religious and secular forces, it’s also about the centrality of whiteness and a defense of “true” Canadianness against an influx of foreign cultures. It is worth considering whether, in general, this debate is really code for racism and anti-immigrant sentiment more generally. I dunno. Do conservatives ever fixate on race and immigration? Seems beneath them, somehow.

"You're Days Are Numbered": On Death Threats And Gun Rights — So what do you think about the NRA's advocacy? Just curious, since their essay resulted in death threats to me, threats of rape to my wife, and threats of abduction and murder of my six-month-old daughter from the people who read the NRA's column. Personally, I think a little bit less of an organization like the NRA, which incites their members to threaten rape and murder and the abduction of babies. Guns make us all safer. Especially in the hands of patriotic NRA members like these folks. Only liberal pussies like me could possibly doubt that tools designed for human death in the hands of angry, irrational people could possibly be any kind of threat in a society which cheerfully accepts 30,000 gun deaths a year without question.

Military retirees: You betrayed us, Congress — Military retirees are outraged that Congress will start voting Thursday on a budget deal that trims military pensions, calling the move "an egregious breach of faith.” Actually, the weakening of any pension — city government, union, corporate, Federal, military — is an egregious breach of faith. But one that companies, courts and politicians are all to eager to embrace at any turn, especially when there are investors whose returns must be protected. Of course, that attitude almost certainly makes me a mouth-breathing Socialist. (Via .)

Wyoming Senate race 2014: Liz Cheney husband Phil Perry on vote rolls in 2 states — Imagine if you will for a moment if a Democratic Senate candidate’s spouse were registered to vote in two states. There would be calls in the House for a Federal investigation, and the story would top the cycle of Your Liberal Media for weeks, and the conservative echo chamber for months. But a Republican candidate’s spouse? This dog will be dead by Sunday. Because conservatism is more moral, dammit.

$22.62/Hr: The Minimum Wage if it had Risen Like the Incomes of the 1% — I cannot even bring myself to be sarcastic about this.

Did 17 Illegal Voters in Ohio Steal the 2012 Election? — And a great deal of legal work has come up dry in the hunt for the mythical "buses of illegal voters" being spirited in from cities or campuses to stuff the polls. But if you just read Fox, you've learned that the voter fraud problem is very real. That’s because conservatives are almost always wrong both on the plain face of the facts, and on the basis their “ideas”. Lying is the only way to make the conservative case. Bearing false witness makes smug Republican Jesus smile, after all, because it’s one of those optional Ten Commandments. (Snurched from John Sapienza.)

?otD: Got your collar turned to the cold and damp? 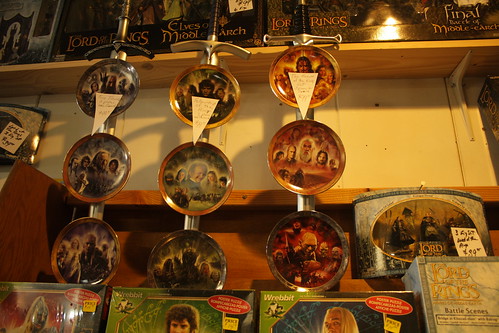 Lord of the Rings plates, the Star Wars Shop in Aberdeen, WA.

Getting the brain MRI this past Wednesday was a pretty tedious process.

First of all, in the continuing tradition of a daily crisis in my life, just as I was sitting down to dinner with Lisa Costello, Jersey Girl in Portland and C—, the hospital called to tell me that their MRI machine was down and my appointment that evening was cancelled.

I had a polite shit fit about that over the phone. I explained that I am a terminal cancer patient going to NIH next week to try to enter a clinical trial which might extend my life. I explained that I needed the MRI performed, read and released to me by mid-day Thursday so I had time to request a disc from the Imaging Library and overnight it to NIH for Friday delivery, as this was part of my qualification process for the trial.

A few moments later the person on the phone came back and said that I qualified for the exception list. The other MRI machine was up and running, but they were so backed up that they were only scheduling people with critical and immediate needs. My 9:45 pm appointment was rescheduled for 9:45 pm, but on the other, still-working MRI machine.

Having dispensed with my weekly requirement for adrenaline surges (for about the fourth time this week), we proceeded to have our dinner and go for our soak at Common Ground Wellness Center. Then Lisa and I hied ourselves over to the hospital complex, because we figured being in the waiting area and thus undeniably in line for the procedure should something else go wrong was all to the good.

This resulted in us spending nearly three hours in a deserted waiting room in a deserted building at night. A few other patients wafted through. MRIs take a long time, so three hours was enough for two people before us. A rather put upon, but still appropriately polite and professional, tech made occasional appearances. Mostly we sat and played with our iPads and tried real hard not to fall asleep.

While I've had MRIs before, I've never had a brain MRI before. If you've never seen an MRI machine, rest assured that they are terrible traps for the claustrophobic or the circumferentially enhanced (I fall into that latter category myself). And frankly, much time spent in an MRI would drive anyone to claustrophobia. And they are noisy. Like Anvil Chorus noisy. Like sticking your head in a jet engine noisy. Something on the order of 125 dB clanging right next to your ears for however long you're in there.

I was handed earplugs. A mask was put over my entire head that looked sort of like a cross between the Alien facehugger and something Dumas wrote about, rendered in the bland, taupe, pebble-finished plastic so beloved of technology designers. Pads were inserted around my head, after a brief discussion of how surprisingly large my skull is.

I then spent forty-five minutes in the tube.

Lately I've been meditating in the mornings. As a formal practice, I mean, not the lie-in-bed-and-groan-about-morning meditation that we all indulge in from time to time. So I meditated inside the MRI tube for forty-five minutes. Which is about like trying to meditate on the flight line of an aircraft carrier. On the plus side, the tech later reported that I held amazingly still, which helped them get good images as quickly as possible. On the minus side, I had my head in an MRI tube for forty-five minutes.

We also had yet another discussion of why I needed a stat read from Radiology, and what I was doing with the scan. The tech confirmed that I did indeed have a brain. The next day, Radiology confirmed that I did indeed have no intracranial metastatic disease. (This was the desired outcome.) After a certain amount of me calling around and cajoling people Thursday morning, I got my discs and sent them out.

Once again, I had to be pushy and pushy again. Self-directed patienthood is not for the faint of heart or unassertive. But combined with Tuesday's CT scan adventures, I pulled two major medical procedures out of my treating hospital in two days. It sure helps that my providers have come to know me well, and understand that I'm not a loose cannon. It sure helps that my health insurance carrier covers this stuff without pre-authorization. It sure helps more that I know who to call and what to say.

At any rate, the brain MRI is in NIH's hands as of yesterday afternoon, and I am still off at the end of this coming week.

Let me be clear. I don't care about Phil Robertson and Duck Dynasty, or A&E. I think I saw about six minutes of that show once in a hotel lobby, so unlike most cable television products, I have a very slight clue.

It's a free country. We have this little thing called freedom of speech. Phil Robertson surely has the right to be a wrong-headed, willfully ignorant bigot. If that weren't true, FOX News would have six minutes of weather programming a day and otherwise be nothing but test patterns.

Thanks to corporate personhood, a doctrine generally much beloved of conservatives, A&E surely has the right to manage its image by placing behavioral requirements on its employees and contractors. If that weren't true, FOX News wouldn't even have six minutes of weather programming a day.

Neither Robertson nor A&E has a Constitutional guarantee of freedom of consequence from their acts. This is a point conservatives have pretended much ignorance on the past few years. A&E is free to suspend Robertson. Those who proudly support Robertson's disgraceful racism are free to call for a boycott of A&E.

Number of shits given by me either way: zero.

However, to all those conservatives now up in arms about this alleged travesty of free speech and suppression of legitimate opinion, I have two words:

Y'all do not have a leg to stand on, my friends. Go find someone else to hate. It's what conservative America does best, after all.