Massive Lake Found Under Greenland Ice — It wasn’t me, I swear.

Study: Fall of the Soviet Union may have saved the Arctic

Billion-dollar climate denial network exposed — A network of 91 think tanks and industry groups are primarily responsible. One of conservative America’s chief contributions to the decline of human civilization: putting us at inflated risk to extreme climate change through opportunistic denialism. Those responsible will of course never be held accountable, because conservatives never are.

Utah? Yes, Utah. Wow. — Slacktivist Fred Clark celebrates the unexpected blow to bigotry in one of America’s most conservative, most religious states.

The cost of reading every book: We know their names — A sobering account of the history of the Library of Congress.

Our God-Given Constitutional Right to a Television Show — The writer Josh Barro has compiled a heart-warming collection of affectionate and supportive notes sent by loving Christians hoping to save him from his sinful and murderous ways. Barro's writings on Phil Robertson provoked this joyous outpouring of excellent news.

When the Right to Bear Arms Includes the Mentally Ill — Because guns make us all safer. Duh.

The "War on Christmas": On Ethnocentrism and Blasphemy — But America never was a "Christian nation." America was founded upon genocide and has chattel slavery enshrined in the Constitution. If anything, that makes our founding document satanic. Slaves built the White House and the US Capital for goodness sake. What is being "lost" in our nation isn't Christianity but white hegemony (Via Slacktivist Fred Clark.)

Ooops, he did it again — If Rand Paul wants to avoid these questions, then he should avoid people who sympathize with white supremacists. And the same is true of the GOP writ large; if Republicans want to avoid accusations of prejudice or insensitivity, then the first step is to end the party’s association with lawmakers, officials, and activists who can’t help but indulge their worst instincts.

The Truth Behind The Lies Of The Original 'Welfare Queen' — Ah, the germ of truth behind one of Ronald Reagan’s most cherished and persistent lies. (Snurched from Steve Buchheit.)

?otD: Can you see your hands? 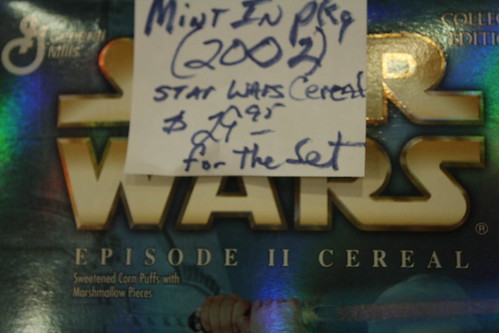 I broke one of my own rules and got involved in a lengthy back-and-forth on Facebook with some folks over religious questions. (No link, because I don't want anyone to feel called out or embarrassed — they are welcome to come link themselves in comments if they so choose.)

In all fairness to everyone involved, including the friend whose Facebook page this all unfolded on, for the most part it's been fairly civil and interesting, rather than degenerating into a swamp of name calling or accusation. However, I was very struck by something one commenter said to me in challenging my assertion that freedom of religion necessarily means freedom from religion.

To me, this statement is so self-evident as to be axiomatic. Without freedom from other people's expression of their religion, how is any citizen going to able to find and express their own faith? Protecting everyone from anyone's individual form of religious expression is precisely how everyone's freedom of religion is protected.

I don't mean you can't have a Nativity scene on your lawn, or a parade on your favorite saint's day, or whatever. Freedom from religion means freedom from state-sponsored or state-sanctioned religious expression. Which does mean you cannot have a Nativity scene at City Hall, or teacher-led prayer in school. Because those things lessen the status of people who are not Christian, and force them to conform to something they do not believe.

For any Christian who is now thinking I'm a full-of-shit atheist, consider this: How would you feel about teacher-led Islamic prayer in schools? Or all school cafeterias keeping kosher and halal? Or a Menorah on the lawn at your City Hall? If you're not fully comfortable with that, then you now completely understand why other folks are not comfortable with officially-sponsored Christian piety.

So in the flow of this discussion, another commenter pointed to the Mt. Soledad Cross in California, saying:

"The man who filed the suit did so because he felt "oppressed" whenever he saw that cross. That's it."

It's very clear from the wording that to this commenter, it's inconceivable that any reasonable person could be offended by a memorial cross. They view the cross as a benign symbol, value-neutral at worst in the larger scheme of things, and cannot understand why anyone else might feel differently. That someone else does feel differently is threatening and enraging.

That is religious privilege in a nutshell, right there.

For the past two thousand years, the cross has been a symbol of bigotry, oppression and pogrom to Jews. Why shouldn't the cross be offensive to some of their modern descendants?

In both the Middle Ages and the modern era, the cross has been a symbol of wholesale slaughter and the destruction of entire nations to many in the Muslim world. Why shouldn't the cross be offensive to some Muslims today?

For nearly the first century of the history of this nation, some Christians stood firmly on the Bible to justify the chattel slavery of millions. Why shouldn't the cross be offensive to some of those slaves' descendants?

For most of the history of this nation, some Christians have treated unwed mothers and single mothers with a profound cruelty, punishing them and their bastard children in ways large and small. Why shouldn't the cross be offensive to some of those women and their descendants?

In contemporary America, as well as throughout history, some Christians have treated their LGBTQ relatives and neighbors with unspeakable cruelty, persecuting them, severing family ties, denying deathbed visitation and inheritance rights. Why shouldn't the cross be offensive to some LGBTQ people?

In other words, angrily assuming only a trouble-making nut could object to the erection of a cross on public land, with all the official endorsement that implies of the cross and everything it symbolizes, is a profound and unthinking act of religious privilege. It's the same religious privilege that leads contemporary Christians to make self-valorizing claims of persecution because their absolute cultural supremacy has eroded to merely overwhelming cultural dominance.

If you stand outside that frame, this is both a sad and frightening attitude. Sad, because of the profound lack of self-awareness it betrays. Frightening, because the power of religious conservatives to harm everyone in the nation in their panic at their sense of decline is demonstrated over and over again every day in the media and at every election cycle.

The wonders of religious privilege, indeed. This is the anger of the mighty at being called in the smallest measure to account for their words and deeds.