As of yesterday afternoon, Calamity of So Long a Life is complete in a full first draft at 198,500 words, 849 pages in Microsoft Word using standard manuscript format modified to Times New Roman 14/28. Not bad for a book I estimated at 200,000 words before I began the drafting process. (Though in fairness, my very original estimate, prior to having a firm outline, was 250,000 words. I wanted to write big, for the elbow room.)

Because of the way I wrote it, the first two sections, about 135,000 words, have actually undergone some preliminary revision. So this isn’t quite a first draft so much as a first and two-thirds draft. Nonetheless, the entire book now exists. I need to correspond with la agente about whether she wants to see this iteration, or the iteration after I’ve revised this new, last third section.

Normally, that would be a no-brainer, but I need to work on editorial revisions Kalimpura now (after a few days’ break to clear my poor benighted brain), and by the time I’m done I may be slipping too far into chemo too fast to reliably deliver the revision as I normally would.

Still, the damned thing is done. As I constantly tell aspiring writers in workshops, the first step to revising and selling a manuscript is finishing the draft. Without a full draft, you’ve got nothing but words.

On to stats, a bit. I had originally planned to write this piece of the book in August, and knew it would be about 60,000 words. In point of fact, due to post-surgical recovery, I didn’t begin this draft until 8/7/11. I spent 19 days writing days between 8/7 and 9/6/11, interrupted by additional surgical recovery time, Hugo script prep, the Hugo awards themselves, a modest nonfiction project, and a round of chemotherapy. (That’s what one of my NaNoWriMo months looks like.)

My current plan is work with my agent on a go-to-market strategy with this first book plus the outline for the two books following. Assuming I can stay healthy next year, I’ll write The Whips and Scorns of Time next spring once I’m out of chemotherapy, and Be All Our Sins Remembered next summer. That will give me the whole trilogy, all 600,000 words, drafted and delivered in 2012.

There’s some obvious marketing issues. The book’s almost certainly somewhat too big from a publishing perspective. It will either have to be trimmed down, or the series recut from three volumes to four. There’s revisions to come. There’s the rather enormous job of aligning and verifying all the contuity both internally in this volume and with the volumes to come.

Damn, I feel accomplished right now. This is the eighteenth novel draft I’ve completed, and a big one at that. Some pride to carry me into the bad months to come.

And, just because I can, a bonus Wordle of the text of Calamity of So Long a Life 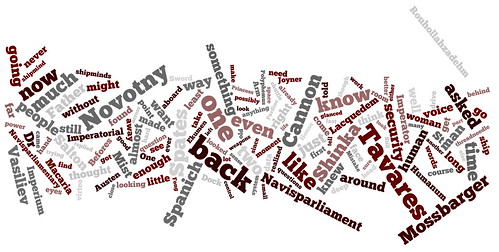